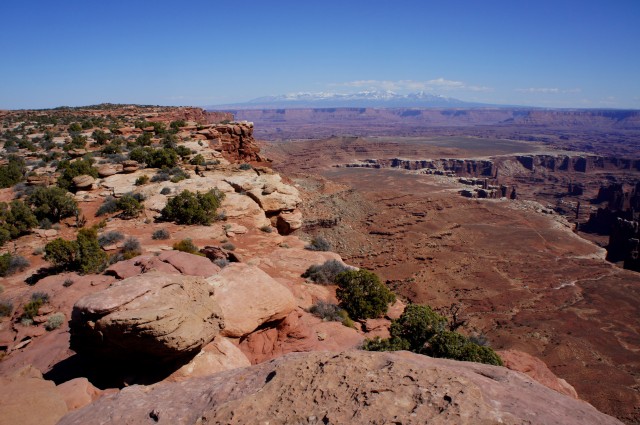 Grand View Point, one of the finest overlooks in Utah’s Canyonlands National Park, is situated at the end of the principal drive through the park’s iconic Island in the Sky District. Visitors in search of a rather casual stroll can venture even farther, hiking from Grand View Point to the very southern tip of the “Island,” where the bottom suddenly drops out on both sides, revealing a breathtaking panorama. Extra credit to those who can find and explore a series of dark and deep fissures—in many ways resembling caves or slot canyons—along the way.

Reaching Grand View Point is easy: simply drive south on the Island in the Sky Road until you can drive no further. The viewpoint is well-marked. It is 300 feet from the parking area, via a paved pathway, to the Grand View Point overlook. From here, the view eastward offers a bird’s eye view of Monument Basin, an intricate network of canyons carved primarily in the Permian-era Organ Rock Shale. Look for the so-called “Totem Pole,” a 305-foot freestanding spire situated near the center of Monument Basin.

The vast plateau wrapping around Monument Basin—more than 1,000 feet below Grand View Point—is the White Rim, accessible only to hikers and four-wheel drive vehicles. Farther east is an intense maze of canyons, as well as the Colorado River, which—having formed a deep depression—is just out of view. On the horizon is another set of cliffs, of similar height and geological composition (Wingate and Navajo sandstone) as the Island in the Sky. Filling out the picture are the La Sal Mountains, providing a snowy contrast with the red-orange landscape in the winter months. As it faces east, the best time to visit the Grand View Point overlook is in the afternoon or evening.

Most visitors will be perfectly satisfied with all this. But it is possible to reach even better—and less crowded—vistas by tackling the 1-mile Grand View Point Trail, which departs from the end of the pavement and quickly drops down a set of stone stairs. With the edge of the cliffs on your left, the trail traverses a broad sandstone flat before weaving in and out of minor hills. The first two-thirds of the hike (marked with huge block cairns) follow the eastern rim, then the trail flips to the west side, providing views of the Murphy Hogback, Candlestick Tower, and the Green River (best views in the morning).

The trail ends abruptly after a mile at the southern tip of the Island, where Junction Butte dominates the view to the south. To the left of the Butte, one can make out the Needles District in the distance; to the right, the remote Maze District. For the best vantage point, scramble up the minor rock outcrop just to your left.

Junction Butte, with The Maze in the distance, from the end of the Grand View Point Trail

View southwest from the end of the trail, toward the Green River and The Maze

Panorama of Monument Basin and the White Rim

After soaking in the views, return the way you came. Allot around an hour for the round trip…

…or take a minor detour to check out a surprising feature: a series of deep clefts, revealing cave-like passages that can be explored—with caution. These dark fissures appear to be the beginnings of splits in the cliff-forming Wingate sandstone and, while resembling slot canyons, end in sharp drop-offs of hundreds of feet.

One of the fissures just off the Grand View Point Trail 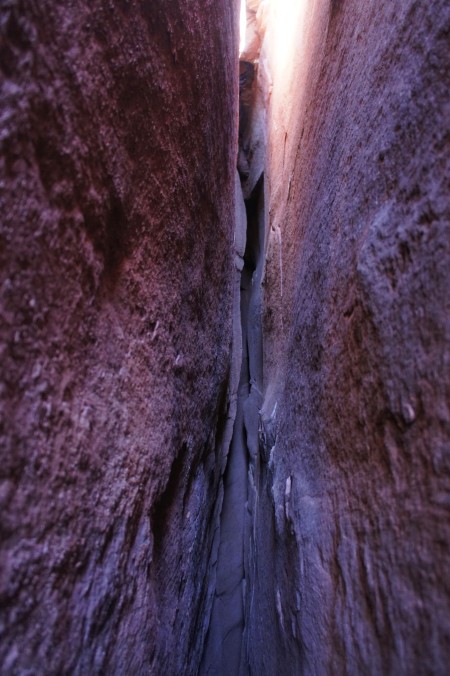 Looking into one of the deep, dark cracks

The fissures can be accessed by hugging the east flank of the plateau about 2/10 mile north of the trail’s end. Be extremely careful, as one wrong step could send a curious explorer tumbling into a dark pit or, worse, off the edge. (Note: See here for an alternative description—and better photos—of the fissures.)