Posted on January 9, 2016 by Andrew Wojtanik

The 2.5-mile trek to Annapolis Rocks is one of the most popular hikes in northwest Maryland and features sweeping views of Hagerstown Valley, Greenbrier Lake, and beyond. One mile farther, hikers can get an even better—and more private—vista from Black Rock. The hike follows a short section of the famed Appalachian Trail (AT) and climbs at a relatively modest incline through South Mountain State Park, making this a good introduction to the AT in Maryland. 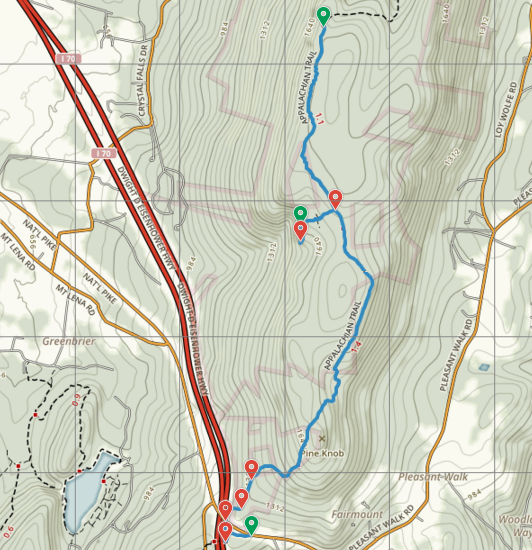 The AT covers approximately 41 miles in Maryland—a short distance across mostly level ridgelines that makes this the AT’s “easiest” state—and this day hike begins at roughly the halfway point: 18 miles south of the Maryland—Pennsylvania line. Parking can be found at the well-marked AT Trailhead on US Highway 40—just east of I-70 and Greenbrier State Park—but be forewarned: this is a very popular area and the parking lot fills quickly. (Note: the parking lot was nearly full on a brisk Sunday in January 2016 when we hiked; there is extra parking, however, on the shoulder.)

The trail starts at the west end of the parking lot, marked with a giant brown sign titled “APPALACHIAN TRAIL.” (Note: The beauty of the AT is that is usually very well-marked.) The first 100 yards follow a paved but unused road; at the end of the strip, the AT dives into the woods off to the left. The route bends south, then west, and quickly leads to a significant trail junction. A left takes you southbound on the AT, over I-70, toward Washington Monument State Park; bear right to head north toward Annapolis Rocks.

Trailhead at US Highway 40

The next 200 yards are the least pleasant of the hike, as the wide trail follows the noisy interstate, then passes under US Highway 40. At last, about ¼ mile from the trailhead, the trail bends northeast, leaving the road network behind, and begins climbing massive South Mountain. South Mountain was the site of a lesser-known battle during the Civil War in September 1862, when General McClellan’s Union Army of the Potomac dislodged General Lee’s Confederate forces from a series of strategic mountain passes early in the war. While the fiercest fighting occurred south of the area covered in this hike, it’s fun to imagine infantry and artillery units maneuvering up and around this rocky terrain.

Four-tenths of a mile from the start, the trail forks. Stay left. Minutes later, the route passes under telephone lines and splits again; this time stay right (unless you have reservations at the Pine Knob Shelter). From here, the climb becomes more rigorous for the next 1/3 mile; around a mile from the start, the trail levels off, having passed Pine Knob (1,714’) and crested the ridgetop of South Mountain. For a short period, the route actually loses elevation, and occasional rock outcroppings offer (obscured) views of Middletown Valley, bounded to the east by Catoctin Mountain. At 1.4 miles, the trail begins to climb again as it heads north for Annapolis Rocks.

Around 2.2 miles from the trailhead, take the spur trail to Annapolis Rocks on the left. From here it is about ¼ mile to the overlook, a series of stony outcrops that provide unobstructed views to the west. The farms and forests of Hagerstown Valley form a patchwork mosaic in green and brown, and the blue waters of Greenbrier Lake are visible to the southwest. In the distance, the Bear Pond Mountains and Sleepy Creek Mountain form the western bound of Hagerstown Valley, while the imposing mountains to the southwest are situated firmly within Virginia and West Virginia (the tallest is probably Great North Mountain). 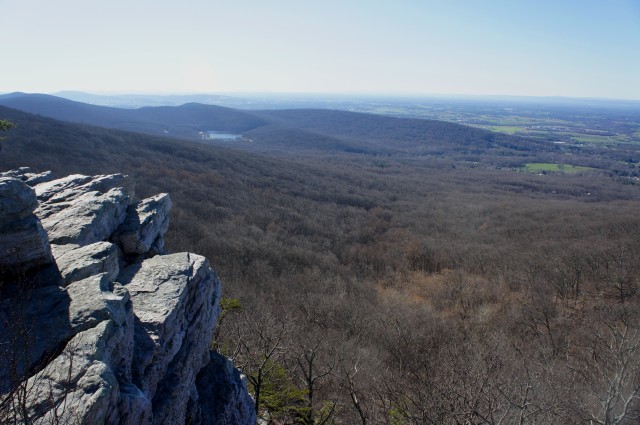 Annapolis Rocks can be quite crowded on a sunny summer day or weekend. But few venture south on the 2/10 mile spur to the Annapolis spring, a modest but pleasant flowing stream that undoubtedly serves as a water source for long-distance hikers on the AT. There is even a small pit toilet, and a couple of rock outcrops on the way offer less-crowded alternatives to the main overlook. 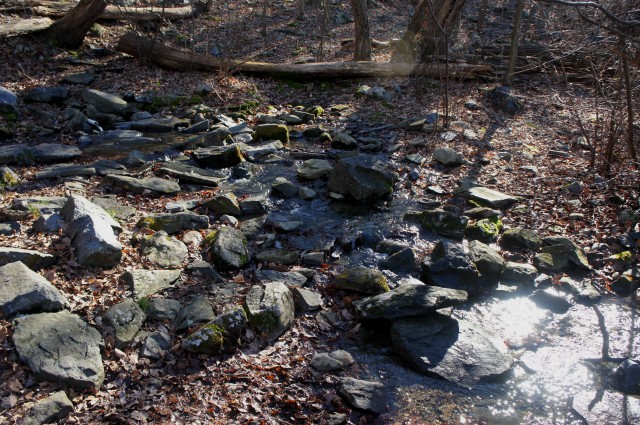 After enjoying a lunch or snack break at Annapolis Rocks, return the way you came, back to the main AT. Most will head south and back to their cars at US Highway 40. But hikers with extra time and energy should venture farther north to Black Rock, an arguably even better vista than Annapolis. The additional one mile is very easy, with negligible elevation gain. 9/10 of a mile from the Annapolis Rocks junction, a faint trail leads west to a false overlook (this is not the main vista but provides nice views nonetheless). Continue a couple minutes farther, where a wooden sign directs hikers to Black Rock, off to the left. Situated atop a boulder field (visible from I-70 below), this viewpoint offers an expansive view to the north, where you can see far up Hagerstown Valley into Pennsylvania. (Note: In fact, South Mountain is one of those rare places on the Eastern seaboard where it is possible to see four states at once.)

Including the spur to Annapolis Rocks and the spring, it is around a 4.2-mile hike to Black Rock. The return trip, sidestepping the Annapolis Rocks diversion, is a meager 3.3 miles and largely downhill. Coming in at a total of 7.5 miles, this hike is relatively easy and makes for an excellent day in one of Maryland’s most scenic corners. Allot 3-5 hours for the walk.