Upheaval Dome—a deep, circular depression containing sharp, chalky badlands—is one of Utah’s Canyonlands National Park’s, or even the American Southwest’s, greatest geological mysteries. How did this peculiar feature form? Geologists continue today to debate the answer. To some, Upheaval Dome is a hollowed crater, evidence of a meteorite strike some 200 million years ago. To others, it the remains of an ancient salt bed, which over time oozed through the rock layers and eroded wildly to form the spectacle seen today. Over the course of a 1.8-mile hike to two viewpoints overlooking Upheaval Dome, you can decide for yourself: salt dome or meteor crater?

The Upheaval Dome parking area is situated at the end of the Upheaval Dome Road, roughly 11 miles southwest of the Island in the Sky Visitor Center. Be prepared to exert some energy on this somewhat demanding hike, especially if continuing all the way to the second overlook.

It is possible to circle around the entire Upheaval Dome via the 8.3-mile Syncline Loop, but for hikers with limited time, it’s perhaps best to stick with the much shorter overlook hike. The Syncline Loop begins shortly beyond the trailhead, while the Upheaval Dome Trail continues straight.

The hike climbs steadily through a minor ravine, then crests a low ridge littered with junipers and hefty boulders, gaining more than 100 feet en route to the first overlook. This viewpoint is arguably the better of the two and offers a wayside exhibit explaining the geologic controversy of the dome. Below is the depression in question, surrounded on all sides by red-orange cliffs of Wingate sandstone. 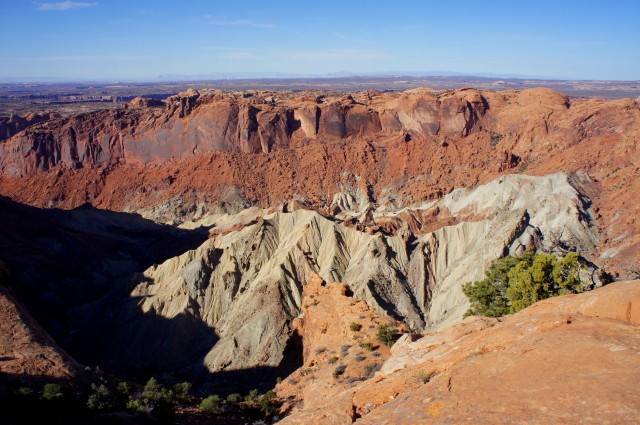 View of Upheaval Dome from the first overlook

Whether it is a meteorite or an ancient salt “bubble,” geologists can agree that Upheaval Dome is one the world’s best examples of a syncline, the term for a situation in which rock layers are—in contrast with its relatively ubiquitous cousin, the anticline—depressed downward and therefore nearly vertical in orientation. The oldest rock strata—here the Organ Rock Shale and the White Rim sandstone—are situated at the center of the depression.

The hike to the second overlook offers more solitude but is also more challenging. The trail quickly drops down through a narrow notch, traverses slickrock, then ascends steeply to the top of a bulging hill, assisted by the presence of moki steps.

Moki steps along the trail to the second overlook

Then it is back downward again, as the trail snakes along a relatively narrow ledge and returns to a wide open expanse dotted with junipers.

For the finale, the well-defined trail climbs another hill and ends at the second viewpoint (marked with a metal fence) overlooking the crater some 800 feet below. While not as impressive as the first overlook, this spot feels more intimate and provides a bonus view down Upheaval Canyon and east to the La Sal Mountains.

Return the way you came, and allot perhaps 1.5-2 hours for the round-trip. Note that the return journey is just as demanding as the hike to this point.