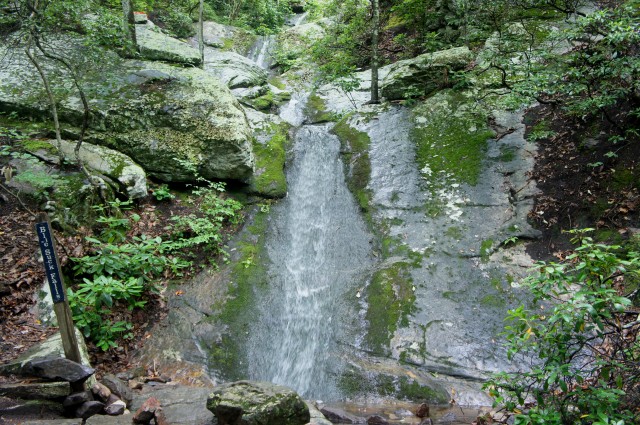 Often cited as one of Virginia’s best day hikes, the long but rewarding Blue Suck Falls Loop in Douthat State Park features tumbling cascades, dense rhododendron thickets, and a series of fine viewpoints in an oft-forgotten corner of the state. It’s no easy walk in the park, however, covering nearly 10 miles and 1,700 feet in elevation gain that is likely to consume much of a day. Visit in the spring or early summer for the best flow at the hike’s namesake falls, and save this one for a clear and sunny day to take advantage of the multiple overlooks (unlike yours truly, who saw only a sea of fog at Tuscarora Overlook). 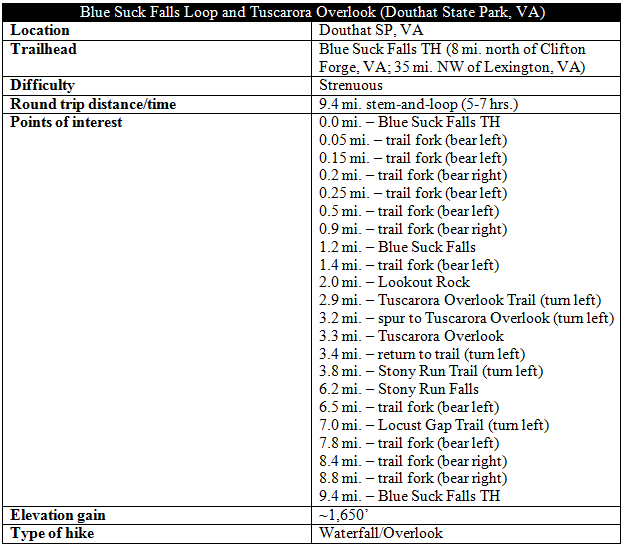 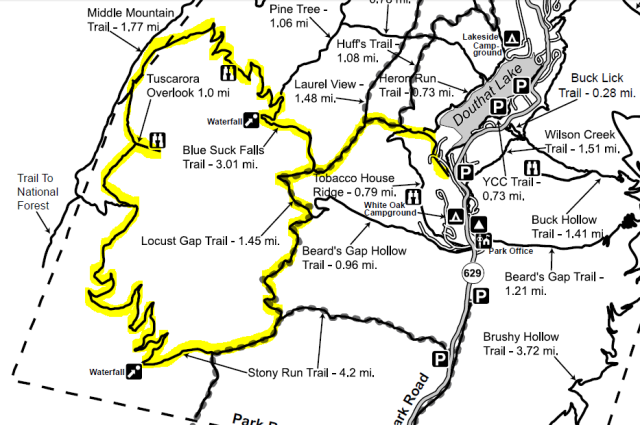 The entrance to Douthat State Park is situated about two miles north of Interstate 64 in the heart of an area billed as the “Alleghany Highlands”—a quiet and often overlooked hiking destination between Lexington, VA and the West Virginia border. (Note: Take Exit 27 and turn north onto State Route 629). The trailhead for this hike is situated around four miles past the entrance; pass the Park Office and take a left at sign for Camp Carson Picnic Area, just before Douthat Lake. Drive to the end of the road, where the well-marked trail begins. Check out the trail kiosk for a map of the route.

For the first three miles, hikers will stay on the blue-blazed Blue Suck Falls Trail, which begins as a wide, gravel path with benches and a fire pit on the left. After less than a 1/10 mile, the trail forks—stay left as the YCC Trail heads right over a bridge and across a green meadow to Douthat Lake. Following Blue Suck Hollow, stay left again a minute later as the Heron Run Trail takes off to the right. At around 2/10 mile, stay right at the junction with the Tobacco House Ridge Trail, then cross the creek to the north bank. Yet another fork awaits—stay left at the junction with the gold-blazed Huff’s Trail. (Note: Virginia State Parks have quite good signage – simply follow the regular markers for “Blue Suck Falls Trail.”)

After four junctions in quick succession, the trail strikes out on its own for a bit, climbs gradually through a forested gully, then reaches a fifth fork at ½ mile—a four-way junction with a pair of benches covered by a decaying wooden canopy. Here the Blue Suck Falls Trail intersects with the yellow-blazed Laurel View Trail; take a left. (Note: The path heading straight is a shortcut to Blue Suck Falls, cutting off maybe 2/10 mile, but it is not marked on most maps, suggesting it may be a social trail. Better to stay on the established path.)

After the junction, the trail almost immediately crosses the stream, then climbs to a sixth junction at 0.85 miles; take a hard right, bearing north through one of the hike’s prettiest sections. Here the route follows the stream for around 1/3 mile, climbing—sometimes steeply—through rocky terrain to the base of Blue Suck Falls, a multi-tiered chute tucked away in a narrowing gulch.

The peculiarly-named waterfall is named for the multitude of small springs containing sulphur water in the area—so-called “suck licks” frequented by a slew of salt-slurping animals. The falls’ intensity ebbs and flows, carrying a heavy volume after rains or snowmelt while at other times reduced to a mere trickle. Whatever the season, Blue Suck Falls is situated in a pretty cove that is cozy and inviting, and a stone bench directly in front of the chute offers a nice place to sit down for a snack.

Beyond the falls, the trail skirts the north flank of the ravine, briefly heads downhill, then rounds a corner and begins to climb with a vengeance. While not overly steep, the next 1.5 miles are persistently uphill as the route ascends to the top of Middle Mountain. Around 1.4 miles from the trailhead, the Pine Tree Trail bears off to the right, and the Blue Suck Falls Trail doubles back to the west in the first of several long switchbacks.

With greater elevation comes a different mix of flora, as deciduous trees and green undergrowth are gradually displaced by Virginia pines and mountain laurel. At the next switchback, it is possible to peer through the trees for a partial view of the valley below; the vistas at the two west-facing bends that follow are better but still obscured.

Around 8/10 mile from Blue Suck Falls—and 500 feet higher—the trail reaches a short, well-marked spur to Lookout Rock, a popular turnaround point for some hikers. This large hunk of upright stone offers (in theory, when the weather is cooperating) terrific views of the Wilson Creek valley, Douthat Lake, and Beards Mountain beyond.

Better, sweeping vistas lie ahead, but the climb is not yet done; beyond Lookout Rock, the Blue Suck Falls Trail climbs another 500 feet before reaching a junction with the Tuscarora Overlook Trail at 2.9 miles, flirting with the boundary of Douthat State Park and neighboring George Washington National Forest.

By now the route has leveled off, having effectively reached the top of the long ridgeline that forms Middle Mountain. Bearing left at the fork, the Tuscarora Overlook Trail begins a gradual descent partway down the east-facing flank of the mountain and reaches a short spur trail to the viewpoint at 3.2 miles (on the left).

Follow the spur for 1/10 mile, terminating abruptly at an old wooden cabin perched atop a hillside with a magnificent 180 degree view. (Again, in theory – if it’s not all clouds like the day I visited in July 2016.) Take a break at one of the benches or on the front porch of the shuttered cabin.

When ready, turn back the way you came for 1/10 mile, then take a left as the Tuscarora Overlook Trail continues south. The route climbs briefly, then descends southeast to meet the Stony Run Trail at 3.8 miles. Take a left, continuing gradually downhill for the next half-mile, after which the pace of descent accelerates. Boulder fields abound as the trail makes its way south toward the Stony Run drainage.

Over the course of 1.5 miles, the Stony Run Trail loses 500 feet in seven long switchbacks. By the sixth sharp bend, hikers will probably be able to hear the rushing water below; after the seventh, the trail plunges into a sea of rhododendron bushes and approaches the creek at 6.2 miles. Here a minor off-trail excursion is required to reach Stony Run Falls, a small but fantastic cascade concealed under a canopy of gnarly rhododendrons. At the first sight of water (look hard through the undergrowth!), leave the trail on the right and carefully descend the bank to Stony Run; look upstream at the multi-tiered falls. Here the dense and wily vegetation contributes to a uniquely spooky but beautiful setting. 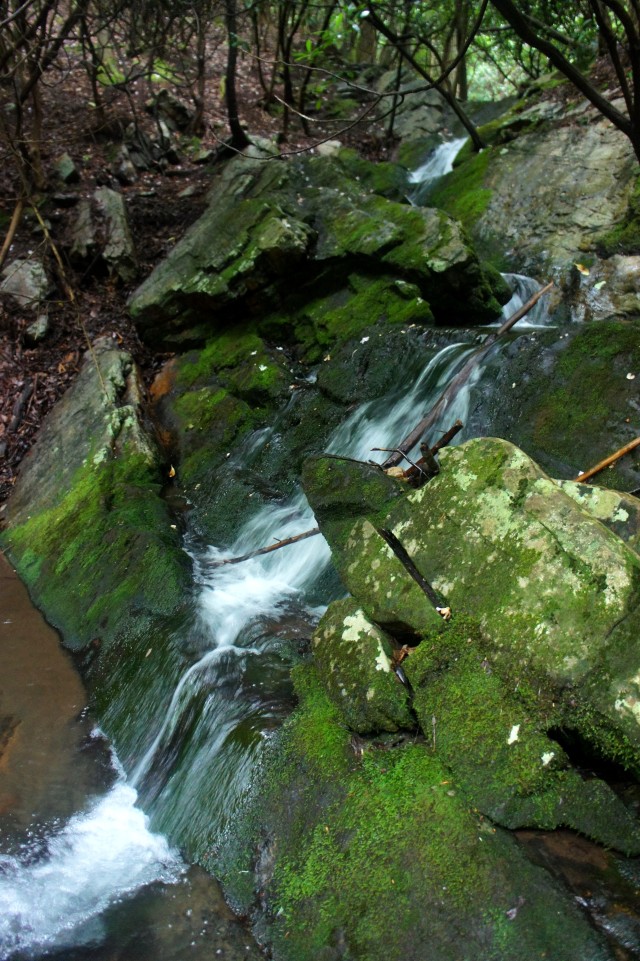 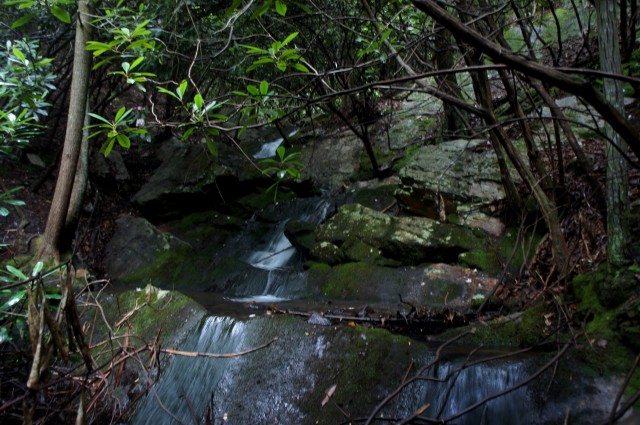 Stony Run Falls and under a thicket of rhododendrons

Return to the trail and head right as the trail levels out and follows Stony Run downstream. Cross the creek, then take your time as you stroll through a splendid hollow, rife with rhododendrons and the sound—if not always the sight—of gently falling water. Peering off to the left at 6.45 miles, the creek bed is virtually dark, with barely a beam of light penetrating the dense rhododendron thicket.

Stay left at the junction with the Douthat Connector Trail at 6.5 miles, after which the stream valley begins to open up and the rhododendrons recede. A quarter mile later, Stony Run weaves through a natural depository of hundreds of hefty boulders. At 6.9 miles, rock-hop across the creek just before arriving at another trail fork.

Take a left onto the Locust Gap Trail, leaving the rest of Stony Run for another day. This yellow-blazed path serves as a connector back to the Blue Suck Falls area. Alas, it is not exactly a straightaway, as it bends and weaves to skirt a series of low hills and leafy ravines. At 7.5 miles, it crosses a relatively flat basin, then approaches another steep ravine, which it crosses at 7.7 miles. Steps later, stay left at the well-marked junction with the Beard’s Gap Hollow Trail.

From here it is 6/10 miles back to the junction mentioned 0.85 miles into the hike. Turn right on the Blue Suck Falls Trail, passing the four-way junction with the wooden canopy after another 4/10 mile.

Follow the blue signs back to the trailhead to complete the arduous but scenic 9.4 miles. Allot most of a day for this hike—all but the hardiest trekkers will probably need at least 5-7 hours to complete the circuit.