Conventional wisdom suggests that slot canyons—narrow, slithering cuts in the sandstone—are relatively confined to the American West: Arizona, California, and Utah. Yet this is not precisely true. While different in character from its western counterparts, The Channels—also known as “The Great Channels”—in southwest Virginia meet the same usual definition of a slot: a sluice in the rock so narrow that it is possible to touch both walls with your hands. Once a largely well-kept secret, newly-constructed trails now offer visitors the chance to more easily access a unique landscape, a rare labyrinth of slots east of the Mississippi. But hikers must work to get here: the sandstone cuts are more than three miles—with 1,200 feet in elevation gain—from the nearest road.

Tucked away in a remote section of southwest Virginia, The Channels are out of striking distance from any major city—but travelers along Interstate 81 between Roanoke and Bristol can reach the area by way of a winding detour of about 30-45 minutes. There are two main routes that lead to the slots: the namesake Channels Trail is quite long and arduous, requiring a steep, 5.5-mile slog to reach the slots. A better option is the Brumley Mountain Trail, which can be reached from Route 80 just as it crests Hayters Gap, a half-hour drive from I-81. This shorter approach—3.25 miles each way with 1,200 feet of elevation gain—turns the hike into a manageable half-day walk.

The road up Clinch Mountain to Hayters Gap is narrow and winding but paved and accessible for two-wheel drive vehicles. (Note: Set Google Maps to “Brumley Mountain Trail Trailhead.”) The parking area at the gap is likely to be crowded on weekends and holidays but relatively empty on other days. The hike begins by following a gravel track heading west from the parking area. Pass through the gate—barring all but foot traffic—and pass a marker indicating that you are at Mile 13.5 of the Brumley Mountain Trail (which begins far to the west, past The Channels).

The ascent at this point is very mild, with the trail gently snaking around a set of woody ravines. Some ups and downs lead to a relatively large gully at 1/3 mile, followed again by a gradual climb. Rhododendrons and mountain laurel are the highlights of the undergrowth, while a variety of deciduous trees form a towering canopy above. At ½ mile, the path passes under power lines, forming a narrow window with a view to the south. 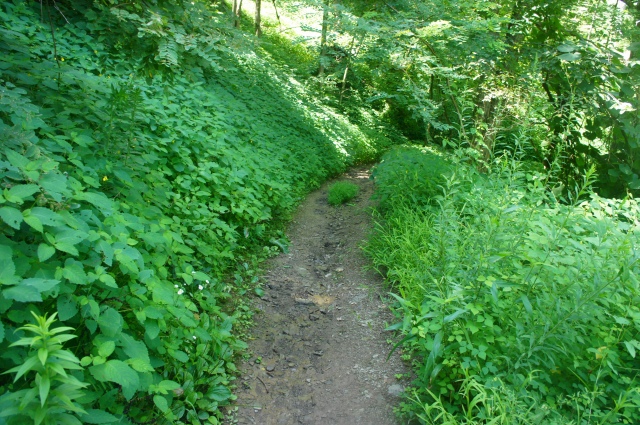 After 2/3 mile on the gravel track, the road bends uphill to the right while the marked footpath to The Channels continues left. Take this turn and follow the dirt trail as it cuts westward. After traversing a particularly lush gully, the trail briefly climbs at a steeper incline before levelling off again at the sight of some privately-owned cabins on the right. Stay on the path as it continues north, crossing officially into The Channels Natural Area Preserve at the one-mile mark. (Note: An information board provides a map of the area.)

Just beyond, pass through another gate, traversing the northwesterly path as it resumes a mild ascent. At 1.4 miles, hikers will reach Shallow Gap, which—at least in winter—offers some obscured views in both directions. This saddle on Raven Ridge is just shy of the halfway point of the hike…although the second half is considerably steeper and more difficult. With a little over 300 feet in elevation gain behind you, it is rather daunting to learn that, from this point, there is about 900 feet left to climb.

As the trail past Shallow Gap rounds a left-hand turn, the steep ascent begins. After about 100 feet in gain, the path crests a ridgeline and bears right—with the remnants of an old road bearing left down the slope. The next section is steeper still, followed by a brief pause when the trail bends westward again. Rock walls become more ubiquitous on the right, and the trail rounds a left-hand bend (with the 11.5-mile marker) at about the two-mile mark.

At 2.25 miles, the trail cuts up a set of switchbacks and then enters one of the steepest sections of the hike that is made enjoyable, however, by low-hanging rhododendrons. After bearing north again, the trail ascends a chunk of slippery slickrock—ensure careful footing in this section. Now firmly up near the summit knobs of Clinch Mountain, the trail swings around to the north side of the ridge, offering more heavily obscured views on the right.

Spur to The Channels

At 2.9 miles, hikers will reach a trail junction—be sure to stay left on the Channels Spur Trail. (Note: The Brumley Mountain Trail bears right, continuing for another ten miles.) The spur trail narrows to a thin but well-worn single-track, enveloped by a canopy of shady rhododendrons. After a left-hand switchback, a tunnel of vegetation suddenly gives way to an opening to sunny skies. Look right to spot the fire tower atop Middle Knob (4,208’), the highest point on Clinch Mountain.

Before heading right, however, take a short detour on the spur heading left, following it to its end: step out onto the tops of a cluster of rock outcrops. The sweeping vistas from this point are the best of the hike: looking east, follow the ridgeline from which you came before it disappears into a drop to Hayters Gap, with Rich Mountain—a continuation of lengthy Clinch Mountain—beyond. The flattop peak that dominates the landscape is Beartown Mountain (4,689’), followed in the distance by Brushy Mountain (3,834’). To the right (east/south), smaller mountain ridges give way to Rich Valley and Great Appalachian Valley (where Abingdon and I-81 are located). Peering around to the southwest, it’s possible to glimpse part of Brumley Mountain (4,221’)—although the best views in this direction are yet to come.

Atop the “Little Channels” on Middle Knob

Be extremely careful at this overlook, however: large incisions cut through the rock, creating crevices 30-40 feet deep. The same weathering—permafrost and ice wedging during the last ice age—that created the Great Channels ahead also formed these fissures. Due to its similarities, although on a smaller scale, it makes sense to label these the “Little Channels.” (Note: Adventurous travelers can work their way down to the ground level, but it requires a level of effort perhaps best reserved for the Great Channels.)

View east, across Raven Ridge to Beartown Mountain, from the “Little Channels”

To reach the main attraction of the hike, return to the principal trail and then stay straight as the route climbs—maneuvering some minor rock scrambling—to the summit of Middle Knob, mounted by the now-inaccessible fire tower (the ladders have been gutted in order to deter climbing). (Note: There used to be a wooden structure here as well, but it has since been torn down.) Walk to the base of the tower and continue straight, catching the trail continuation as it dives back into the woods beyond.

At roughly 3.1 miles from the start, the winding trail reaches the tops of the Great Channels. Begin by following the social trail on the left, which climbs to a good viewpoint of the sandstone outcrops and Brumley Mountain (4,221’) beyond. The actual tops are fenced off, however, to protect a rare plant community called the Southern Appalachian Mixed Heath Bald.

Atop the Great Channels, looking west to Brumley Mountain

From the tops of the channels, the final approach involves descending a steep ravine, shaded by rhododendron, into the maze of slots. The main thoroughfare is relatively wide but impressive, with walls—dotted with lichen—rising up to 40 feet on either side. 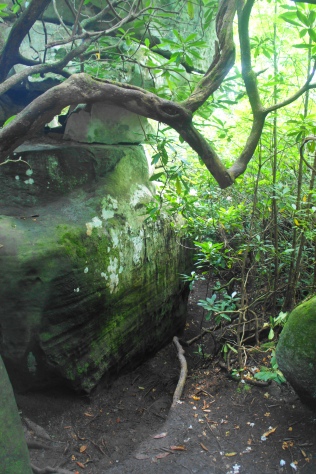 Final descent into The Channels 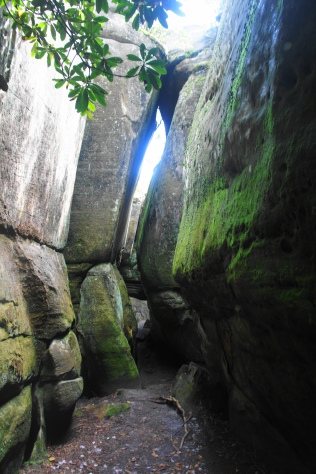 Entrance to the majestic Channels

Follow the incision into the inner sanctum of the channels, where a four-way junction offers hikers several choices. The narrow cut to the left leads to a 90-degree turn and, eventually, a dead-end. The path heading straight leads into a dark passage that drops to a spooky, rock-choked room. Taking a right leads into a dizzying labyrinth of rock, with each junction leading to additional options for exploration. Be sure to keep track of your surroundings, as it is easy to get lost.

Green lichen color the rock in The Channels 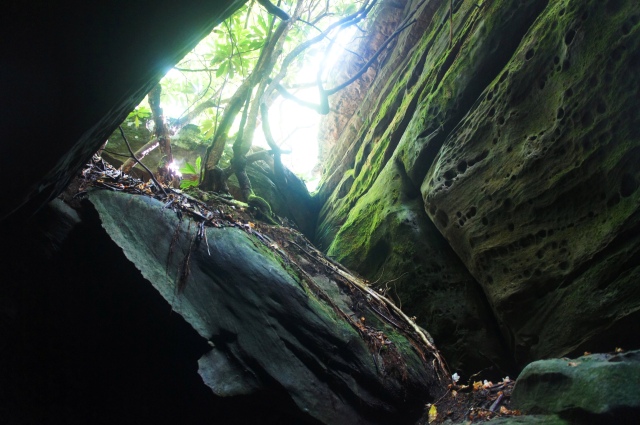 Secret room in The Channels

Shady passageways in the maze of rock

Narrow slot at The Channels

Once you’ve had your fix of dark, sinuous passageways, secret natural arches, and verdant sandstone walls, return the way you came – climbing back up and out of the Channels, across Middle Knob, and down Raven Ridge to the parking area. With stops along the way—including the “Little Channels” vista—expect to take around 4-6 hours for the round-trip hike.