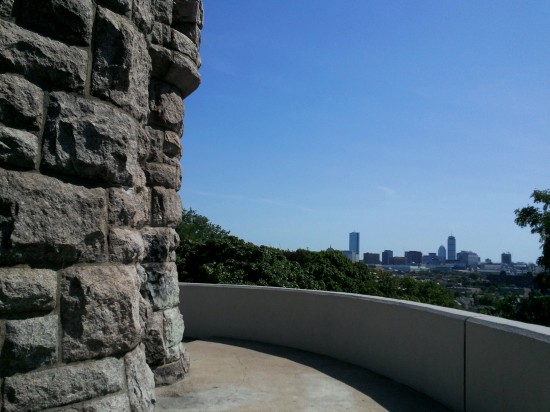 Though not a hike per sé, I thought it might be fun to include a short note about a hidden gem I discovered today in my own neighborhood outside Boston. Prospect Hill Park is just 1/5 mile northeast from Union Square (follow Stone Ave. 350 yards to the park) and steeped in history, of which I was completely unaware until visiting.

Of historical note, Prospect Hill was…

In 1903, the 42-foot Prospect Hill tower—which resembles a Medieval-era European castle turret—was constructed as a commemoration to the site’s historical importance. A replica of the old Grand Union flag reportedly flies there to this day (though it was nowhere to be found on the Sunday that I visited).

Today Prospect Hill Park is a small but intriguing destination for picnickers, dog-walkers, and couples looking for a romantic evening walk. The main draw, besides the awesome tower, is the stunning view of the Boston skyline (or at least of Back Bay, Prudential, etc.). For Somerville, Cambridge, or Boston residents or visitors to Union Square, Prospect Hill Park is well-worth a peek!