Utah’s Canyonlands National Park is sliced into three quadrants by the deep cuts of the Colorado River and the Green River: Island in the Sky, Needles, and The Maze. Yet due to the deep incisions formed by the two rivers, very few roadside overlooks, or even backcountry trails, offer a glimpse of either. An exception is the Confluence Overlook Trail in Canyonlands’ Needles District. This 10.4-mile out-and-back hike cuts west from the Big Spring Canyon Overlook to a fine viewpoint looking down 1,000 feet on the meeting of the two mighty waterways—and a look at some of the park’s oldest rock layers. The lengthy trail to the overlooks weaves in and out of minor draws in the hoodoo-forming Cedar Mesa sandstone and offers panoramic views of sweeping Wingate sandstone cliffs to the north, west, and east. Overall elevation gain is minimal—but this does not account for the considerable ups and downs, which—combined with the length—make the Confluence Overlook Trail a strenuous day hike.

Big Spring Canyon Overlook, at the end of the Scenic Drive in the Needles District, doubles as the trailhead for the Confluence Overlook hike. A conspicuous wayside exhibit offers a basic map and information on the hike (including a slight overestimate of the length at 11 miles round trip).

Just beyond the signage, the well-worn trail descends at a relatively steep grade to a small, flat lookout providing a nice vantage point of Big Spring Canyon. In contrast with Upper Big Spring, the lower canyon here is narrower and more profoundly cut. It is guarded by a towering pillar to the north, as well as a series of tall, plump hoodoos across the drainage to the south. Just down-canyon, Big Spring winds and bends through the Elephant Canyon formation all the way down to the Colorado. This sedimentary rock layer is older but less colorful than the white, yellow, and red Cedar Mesa sandstone above.

While the descent is steep, the bottom of Big Spring Canyon is reached within 5-10 minutes of hiking. Despite Big Spring’s name, the streambed here is more likely than not to be dry.

What goes down must come up, and the trail spends very little much time on level ground before beginning a southward ascent up a small ravine on Big Spring’s western flank. After gaining 50-70 feet in elevation, the route doubles back to the north (as the trail curves, a thin, dark joint just off to the left is worth exploring). Shortly thereafter, the ever-climbing path ascends a ledgey rock slope and tops out at a peculiar, tunnel-like feature dubbed “the Keyhole.” This shady aperture between sandstone hoodoos is also an example of a joint, formed with the help of a prehistoric uplift and, interestingly, the presence of salt deep in the bedrock.

“The Keyhole” along the Confluence Overlook Trail. Junction Butte is framed in the distance.

The Keyhole provides passage out of the first ravine and over to a second, this one a bit longer and wider. Breaks in the vegetation (principally pinyon pines and junipers) offer appealing views of minor goosenecks in Big Spring Canyon—as well as Junction Butte and the mammoth Island in the Sky on the northern horizon.

Five minutes from the Keyhole, a difficult climb up a 4-foot shelf is made easy by the presence of a sturdy steel ladder. Shortly thereafter, the trail flattens out, having finished its climb out of Big Spring Canyon.

For the next half-mile, the trail traverses relatively level terrain as it makes its way toward a low slickrock ridge that offers the hike’s first peek at Elephant Canyon, the next significant drainage the route must cross. Turn around, facing east, for an inspiring view of the La Sal Mountains.

Bearing west, the trail follows rock cairns, then a dusty, boot-worn trail, down to a tributary of Elephant Canyon. This drainage feeds into a much larger canyon that rivals Elephant in breadth. It is another ¼ mile around a left-hand bend, however, until hikers reach the main wash, at this point at least 20 feet wide. This is roughly the hike’s two-mile marker. 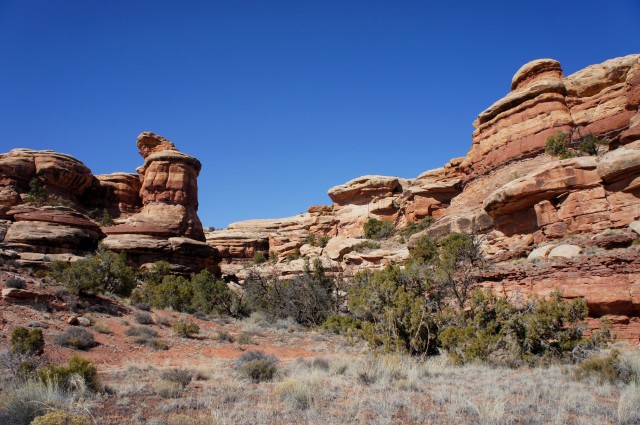 Side drainage feeding into Elephant Canyon along the Confluence Overlook Trail

The cairned route crosses the wash bottom and almost immediately connects with a smaller, rockier creek bed bearing southwest. After simply following the arroyo for a few minutes, the trail begins to climb up a series of slickrock benches to the canyon rim. Atop the ridge, hikers are rewarded with nice views to the south of the Needles and the Abajo Mountains. The dark red outcrop to the west is composed of the 245 to 286 million-year-old Organ Rock Shale, a sedimentary rock layer frequently exposed in the Island and the Sky District but rarely seen in the Needles.

Looking back toward Elephant Canyon from the Confluence Overlook Trail 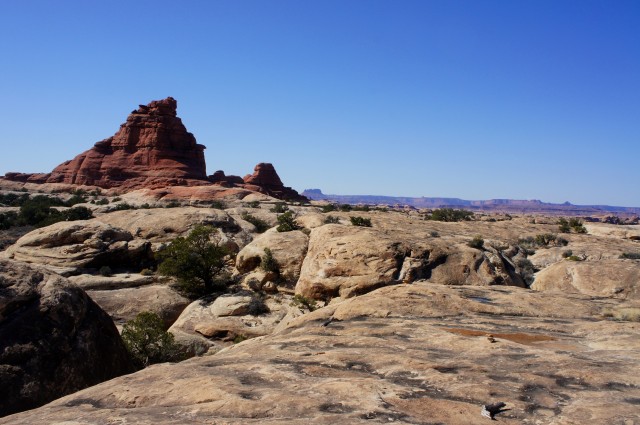 After skirting one finger of Elephant Canyon, the trail drops partway down a second drainage in the Cedar Mesa sandstone. Crossing a third drainage necessitates a very steep, multi-tiered drop of approximately 30-40 feet—likely requiring the use of hands to descend. 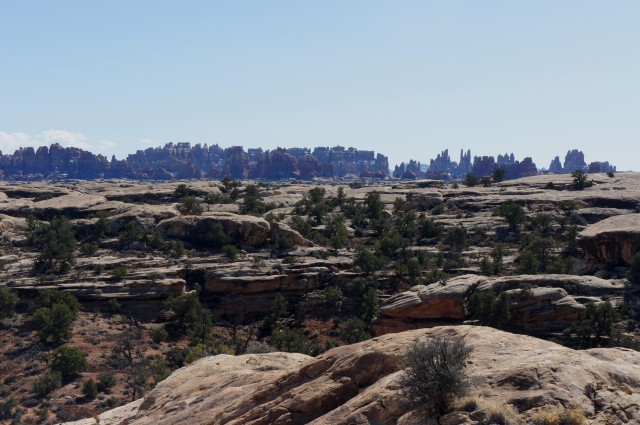 View of The Needles from the Confluence Overlook Trail

Just after the difficult downward scramble, a sandy trail leads almost immediately uphill again. Roughly level with the Organ Rock outcrop on the right, the route climbs gradually up a side drainage, descends slickrock, then climbs again to a narrow pass. A couple downclimbs along sandstone ledges in this area should be tackled slowly and carefully.

Finally, after more than three miles of hiking, the route meanders down a ravine of deeply cross-bedded slickrock to a grassy, open expanse dubbed Twin Valleys. This is the first of two long, flat ditches bounded by shallow cliffs called “horsts.” The Grabens, as these pleasant grasslands are known, are actually ancient faults that roughly parallel the Colorado River at a northeast-to-southwest tilt.

Around 3.4 miles from the trailhead, the Confluence Overlook Trail crosses a four-wheel drive (4WD) jeep and bicycle track (access from the extremely rugged Elephant Hill Road).

Though this may feel like the home stretch, it is another 1.8 miles from this point to the overlook. Fortunately, the traverse across flat stretches of needle-and-thread grass and Indian ricegrass is easy walking, interrupted only twice by stunted ridgelines and a mild descent through a petite draw.

7/10 mile from the initial road crossing, the trail meets it again, this time at a signed junction in Cyclone Canyon (the second of the Grabens). Follow the arrows pointing northwest toward the “Confluence Overlook.”

Continuation of the Confluence Overlook Trail in Cyclone Canyon

In less than a minute, the footpath merges with the jeep road. This junction is not signed, but simply bear left on the 4WD track. After 0.6 miles, including a sharp left-hand bend, it may come as a surprise to encounter a dusty parking area with a pit toilet and picnic tables. (In theory, visitors with a 4WD vehicle may begin the Confluence Overlook hike here.)

Leaving the jeep trail behind, a wide, rocky path continuing off to the southwest climbs a minor saddle. This is truly the final stretch, as the trail descends gradually to the overlook. All of a sudden, at a point ½ mile from the end of the 4WD spur, the bottom drops out, giving way to a 1,000-foot, near-vertical plunge to the Colorado River. Just upstream to the right, the confluence of the two rivers is in plain sight.

Seven years after his initial survey of the area, famed explorer John Wesley Powell wrote in 1875 that the Green River, with a longer flow and larger watershed, is the “proper continuation of Colorado.” Peering down at the confluence, the coloration of the water seems to corroborate the claim. Though the Green River is traditionally thought to end here, its emerald hue overtakes the khaki-colored waters of the Colorado after the merger.

Noticeably different from the Cedar Mesa sandstone, the rock of the canyon below belongs to the Lower Cutler formation, also known as the Halgaito Shale. This layer was deposited during the Permian Period (pre-dinosaurs) between 245-286 million years ago.

Across the Colorado to the south and west is the Maze District, where the spiny fins of The Doll House are visible off in the distance. The terrain opposite the confluence is part of the Island in the Sky District, as are the tall Wingate sandstone buttes on the northern horizon. The yellow-tinted cliffs on the near side to the right belong to the Needles District, capped by the ubiquitous Cedar Mesa sandstone.

View southwest toward The Maze District from Confluence Overlook

These, of course, are simply man-made, administrative divisions. The highlight of Canyonlands—a labyrinth of naturally-sculpted canyons, hoodoos, and spires—knows no bounds, and the confluence is the pulsating heart of this spectacular landscape.

After a restful break at the windy overlook, return the way you came. Catching the goosenecks of Big Spring Canyon in the evening light is particularly majestic. Allot 5-6 hours for this round-trip hike. 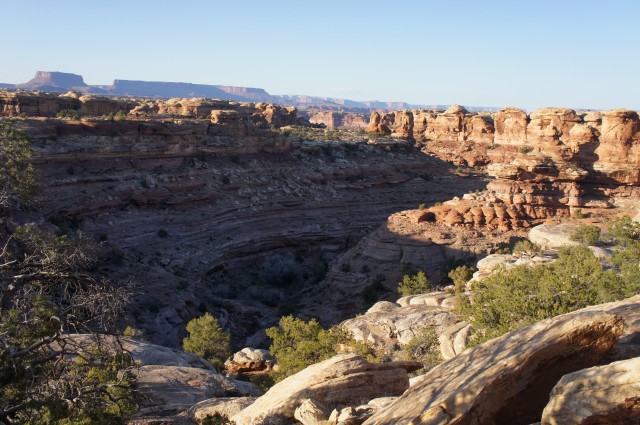 Goosenecks in Big Spring Canyon as the sun sets over Canyonlands