The East Canyon Trail is the longest—and probably the least visited—trail in Colorado’s Castlewood Canyon State Park. The rugged path weaves east along slickrock rims from the Bridge Canyon Overlook, descends to the canyon bottom, and forms a short circuit around the East Canyon Preservation Area, which protects a variety of flora and fauna in desert grassland and canyon riparian environments. This stem-and-loop hike offers solitude in an otherwise increasingly popular park situated within an hour’s drive of the Denver metro. (Note: Due to the area’s “preservation area” designation, the East Canyon Trail is closed in the fall and winter.)

The hike begins on a concrete, wheelchair-accessible path leading to the viewpoint. After about 150 feet, the well-signed East Canyon Trail takes off to the right.

Bearing south and east, it will be at least 1/3 mile before the trail offers an unobstructed view of Castlewood Canyon, though the presence of the deep incision is felt. The highway bridge over the gorge (beyond which lies the preservation area) can be seen sporadically through the trees—but before reaching it, the trail must first skirt around two rocky and brush-filled ravines. In springtime, or after recent rains, both are likely to harbor murky pools of water.

Highway 83 crosses the “Bridge to Nowhere” in Castlewood Canyon, from East Canyon Trail

Less than ½ mile from the trailhead, the East Canyon Trail approaches the structure known as the “Bridge to Nowhere.” The archway, constructed in 1946, owes its dubious moniker to an engineer’s change of plans that left south-bound Highway 83 unpaved beyond this point. It was not until the 1960s that the rest of the highway was asphalted all the way to Colorado Springs.

The trail drops down a short flight of stairs to clear the bridge from below, where a wooden boardwalk leads under the highway and into the East Canyon Preservation Area. The passage offers excellent views both up and down Castlewood Canyon.

View of Castlewood Canyon to the east, East Canyon Trail

The canyon ahead, carved by perennial Cherry Creek, is rather wide, shallow, and marshy. In contrast with the Inner Canyon hike to the west, the East Canyon is relatively free of rhyolite boulders, replaced instead by broad, grassy slopes and dense thickets of spiny willows.

For the next ¾ mile, the route follows the southern rim of the canyon, though it keeps well clear of the cliff edge. A little over a mile into the hike, the trail abruptly descends to the bottom of the canyon, which at this point is a mere 30-40 feet deep. A wooden bridge, unsupported by beams or other pillars, traverses Cherry Creek, crossing to the east side. 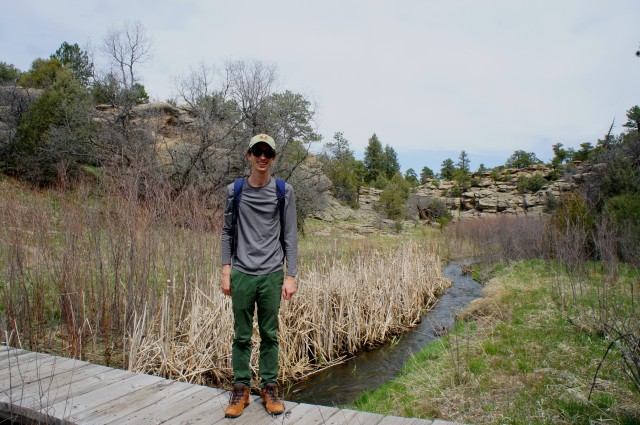 The trail beyond bears south for less than 1/10 mile before angling east up a significant side drainage guarded by a patch of twisted Gambel oaks. Spring snowmelt fills this boulder-strewn ravine with lovely pools and minor cascades. Grottos support mosses, liverworts, and occasional ferns, and the sound of crowing frogs is, at certain times of year, ever-present. 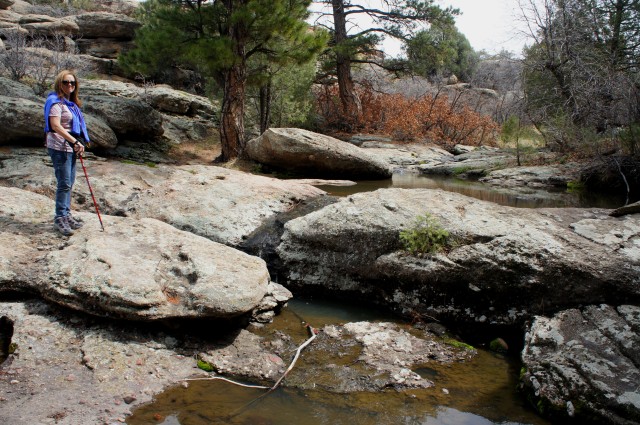 After crisscrossing the drainage in a number of places, hikers reach a trail fork at 1.4 miles. The signed junction marks the start of the 1.2-mile loop portion. 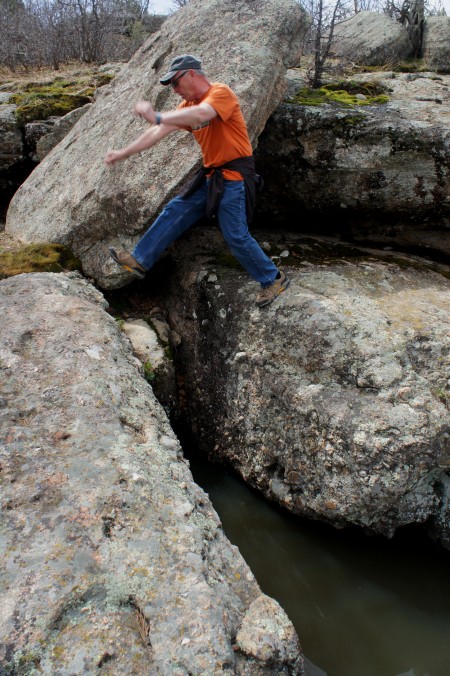 Bearing right at the junction, hike in a counter-clockwise direction around the loop. Minutes from the trail fork, a gradual ascent up a stony ravine leads to a broadly sloping grassland. Here the pines and junipers virtually disappear into the rear view mirror, replaced by patches of bunchgrass, broad-leaf yucca, and sagebrush shrubs.

With some distance from tree cover, excellent views of the Front Range unfold, including a look at mighty Pikes Peak (14,114’) rising to the southwest. To the north and east, unfortunately, the open expanse is partially blemished by the sight of creeping housing developments.

From here, retrace your steps 1.4 miles back to the trailhead. Allot 2-3 hours for the round-trip hike.

Moreover, through the end of 2015, Castlewood Canyon State Park is offering challenge coins to any hiker who logs 100 total miles on the park’s 15 trails. Keep track of your miles here and return a completed sheet to the Visitor Center (near the east entrance to the park) to receive your prize.