Three years after John Brown’s ill-fated raid at Harper’s Ferry, violence again struck this strategically-located town, situated at the confluence of the Shenandoah and Potomac Rivers in present-day West Virginia. The year was 1862, and Confederate General Robert E. Lee had directed famed General T.J. “Stonewall” Jackson to seize Harper’s Ferry from a Union garrison holding the town. In September, Jackson dispatched his troops to attack from three separate directions, with two columns commanding the strategic heights to the north and south and a third to break the Union line situated west of the town. Outmanned and outflanked, the Union garrison collapsed after four days of fighting, surrendering more than 12,000 soldiers, to this day the second-largest capture of US forces in American history (15,000 surrendered at the Bataan in the Philippines in 1942).

Harper’s Ferry would change hands several times over the course of the Civil War, and its history of war is today preserved by the National Park Service. Much of the town, the battlefields, and its surrounding heights have been incorporated into the 3,660-acre Harper’s Ferry National Historical Park. One of the highlights is Murphy-Chambers Farm, now a peaceful and picturesque field but once the site of bloody defeat of Union forces. Today, a brief loop hike—starting from the Harper’s Ferry NHP—circles the battlefield while offering scenic vistas of the Shenandoah River and Blue Ridge Mountains.

Described elsewhere as “more of a historic stroll than a true hike,” the 2.4-mile loop around Murphy-Chambers Farm nonetheless offers a fine balance of historic flavor and natural beauty. The walk described begins just to the northwest of the Visitor Center, next to the restrooms. (Note: it’s marked “Murphy Farm.”) The title at the wayside at the start—“Confederate Victory”—spoils the punchline, though additional exhibits pepper in interesting nuggets of military and cultural history along the way.

Within steps of the start, the walk crosses Shoreline Drive, then climbs a set of ten wooden steps to a small hill overlooking the road. The trail—narrow but easy to discern—follows the drive for about 150 yards before darting off into the forest, the start of a short, pretty traverse of a woody ravine. Less than 10 minutes from the Visitor Center, the trail swings abruptly to the left, then right—the only set of switchbacks in the hike. At a quarter mile, the route crosses a small stream, then continues west to the first trail fork and the marked entrance to Murphy-Chambers Farm. Murphy Road comes in from the northwest, fading to gravel as it continues southward to the official Murphy-Chambers Farm parking area (the start for a shorter, alternative hike). 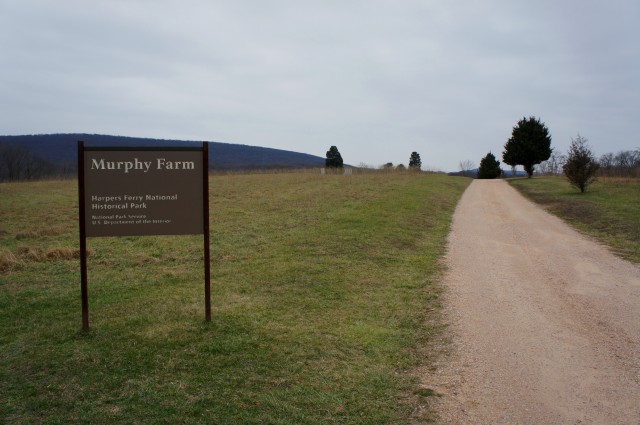 Take a hard left at the tree line, following the grassy path heading southeast. The trail here follows the edge of the woods and—after less than 2/10 mile—arrives at the first of two river views. This one offers a view east, toward Lower Town and Maryland Heights.

River vista, with Maryland Heights and Loudoun Heights beyond

The story of the Murphy-Chambers House—situated a few minutes up the trail off to the right—is partly a tragic one. In 1862, the government seized the house and land of humble farmer Edmund H. Chambers; after the war, Chambers returned home to find his property destroyed and was never compensated for his loss. In 1888, he wrote a letter to the Secretary of War claiming, in exasperation, “I am now very poor and am eighty years old. I am the son of a Revolutionary soldier…and I think I have a very good record.” He died, penniless, two years later.

Alexander and Mary Murphy purchased the farm in 1869, and the Murphy family was able to keep the land until 2002, when it was sold to the National Park Service.

The next wayside on the trail tells the story of the Confederate Army’s bold move to outflank the Union line on the morning of September 15, 1862. Overnight, Gen. A.P. Hill led 3,500 troops from nearby Schoolhouse Ridge to this point, dragging 20 2,000-pound cannons up steep slopes and ravines to Chambers’ farm, surrounding a surprised and helpless contingent of Union infantrymen by sunrise. The move precipitated the demise of the Union garrison at Harper’s Ferry, which surrendered en masse the following day.

With a fleet of cannons on the horizon to the right, the trail continues south to the edge of the bluffs, then turns a corner heading west. The foundation of John Brown’s Fort is the next highlight of note, a token memorial to the infamous abolitionist. It was in this building that Brown and several of his followers were captured on October 18, 1859, ending his quixotic raid on the federal armory intended to free Virginia’s slaves. At the time of Brown’s arrest, the “Fort” (actually a local fire house) was situated two miles east of here in Lower Town; it was then temporarily moved to Chicago for the World’s Fair in 1893 and later reassembled at Murphy’s farm in Harper’s Ferry, where it stood until 1909. (Note: Now only the foundation remains. The fire house is now situated across the street from its original location in Lower Town.) While on Murphy’s property, the fort became a popular pilgrimage site for civil rights advocates. (Note: NPS now bills the Murphy-Chambers Farm walk as a tour through history “From the Civil War to Civil Rights.”) 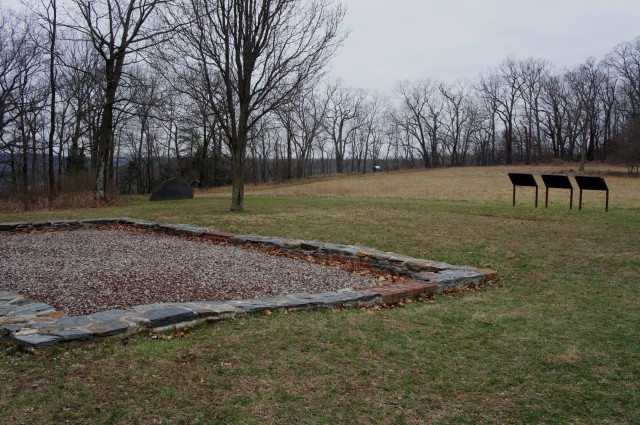 Just a couple minutes farther lies the second River Vista, probably the best view on the hike. Down below, the Shenandoah River roars as it tumbles down a series of rapids—a popular spot for kayakers. The sharp drop and rocky terrain on display here makes you wonder how it was possible for Gen. Hill to march 3,500 men and 20 cannons to surround his Union adversaries—while avoiding detection—on that fateful night in September 1862. A wayside exhibit offers a short narrative and map of the maneuver. 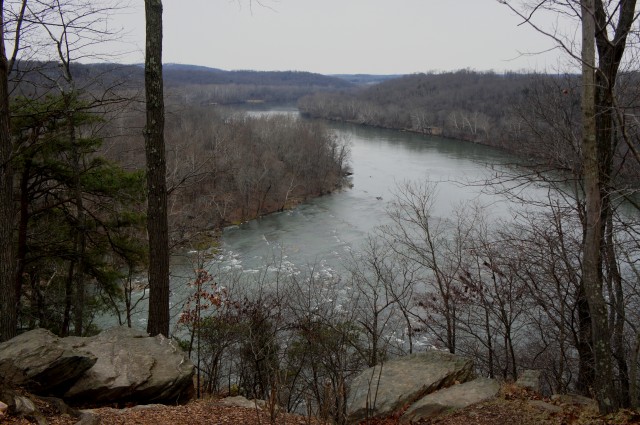 Turning left (into the woods) at the next fork, the story fast forwards two years to August 1864, by which time Union General Philip Sheridan’s troops had regained Harper’s Ferry. About 100 yards from the junction, earthworks reveal the remains of Sheridan’s outpost, built in 1864 to prevent Confederate forces from sneaking into Harper’s Ferry undetected by following the Shenandoah River below—a route they had used successfully three times in three years. The redoubt was never attacked. 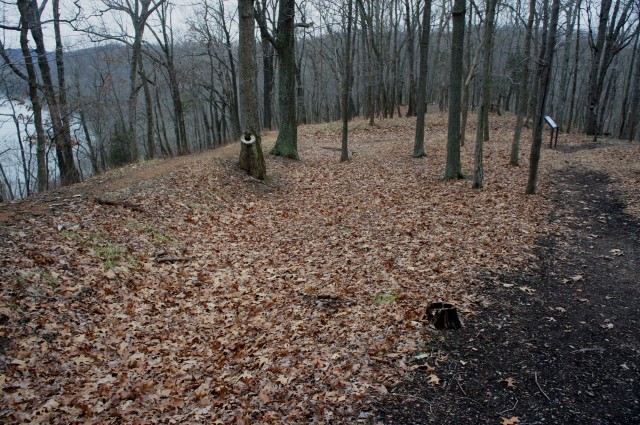 Beyond the earthworks, the trail descends partway down a steep ravine to the hike’s lowest point, turns a corner, and then begins climbing again to another trail junction. Stay right—a left turn leads down to private property. Roughly 1.6 miles from the start, the woods recede and the path spits out onto a gravel road. This track, partly closed to cars, heads north, passing the group of four cannons and the Murphy-Chambers House on the right. 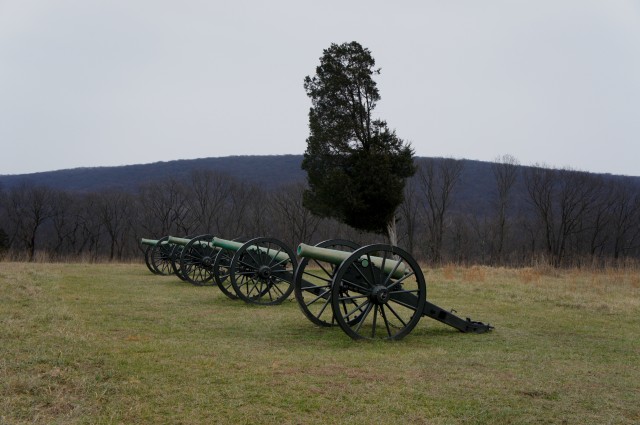 More than two miles from the start, hikers complete the loop, returning back down the original woody ravine and across Shoreline Drive to the Visitor Center. For a casual stroll, allot an hour and a half for the entire hike, including spurs to the cannons, earthworks, and Murphy-Chambers home; history buffs may want to devote more time.