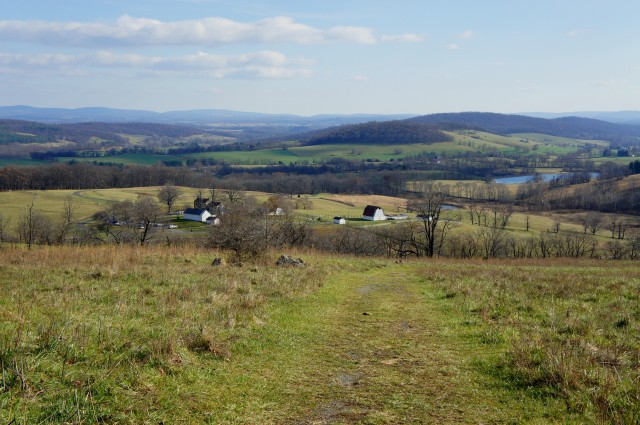 More than a dozen hiking trails crisscross northern Virginia’s Sky Meadows State Park, situated on the eastern slopes of the Blue Ridge Mountains—and there is perhaps no better hike in the park than the moderately strenuous circuit described here. Scenic vistas abound as hikers make their way up South Ridge, head northeast along a section of the Appalachian Trail, and then descend the sun-soaked Ambassador Whitehouse and North Ridge Trails. There are numerous variations (for example, tack on an additional two miles by taking the purple-blazed Old Appalachian Trail); this description covers a relatively short, 4.8-mile loop with around 1,000 feet in elevation gain.

Begin your visit at the Sky Meadows Visitor Center, situated on a historic farm dating to the colonial period. The hike technically begins up at the nearby Park Office, situated around 150 yards up the road from the Visitor Center. Look for a wide gravel road—closed to vehicle traffic—to the left; this is the start of your trek.

Continue southwest on Boston Mill Road, guarded by brush and trees on both sides as it passes between farmsteads. Stay straight at the first trail fork, then continue downhill into a wooded gully. (Note: The trail coming in from the right is your return route.) Stay straight at the second trail junction at 3/10 mile, then cross Gap Run. About a minute later, bear right on the South Ridge Trail, emerging from the trees and entering a sloping pasture.

Don’t get too comfortable with the wide, gravel path, as the South Ridge Trail quickly takes a hard right, leaving the old road behind and reentering the woods at 4/10 mile. Beginning a slow but steady ascent, the winding path climbs to an overlook at 6/10 mile, offering partly-obscured views of the northern Piedmont. Here an unmarked path continues right, skirting the edge of the open field to the north; stay left on the main trail, which dives into a wooded gully.

Ascending the opposite hillside, the South Ridge Trail follows an old dirt double-track amid thick brush on both sides. At 3/4 mile, a solitary bench offers tremendous eastward views from the second—and greatly superior—overlook.

Minutes past the overlook, the trail bends westward, returns to thick woods, and gradually climbs 400 feet over the course of one mile. Around two miles from the Park Office, stay left at the junction, emerging onto the North Ridge Trail. The next quarter-mile is the steepest uphill of the hike, covering an additional 250 feet in elevation gain.

The trail levels off at around 1,800 feet at Mile 2.3, where the route splits again. Take a right on the Appalachian Trail (AT), the most famous route in the eastern United States. Stay right at the intersection with the purple-blazed Old Trail at 2.4 miles, after which the AT crosses a pipeline clear cut. A small wooden gate offers passage through a livestock fence, then the AT traverses an open field as it continues northeast. Again wooded, the AT drops 150 feet in the next half-mile. (Note: At this point, you have briefly left Sky Meadows State Park but will return within a mile and a half.)

Now over three miles from the start, the trail splits again in the middle of an open meadow. Leave the AT and turn right onto the Ambassador Whitehouse Trail. Named for the late career diplomat Charles Whitehouse, the wide trail blazes a path across the meadow and down the slopes of North Ridge, approaching the so-called “Paris View” at 3.5 miles. 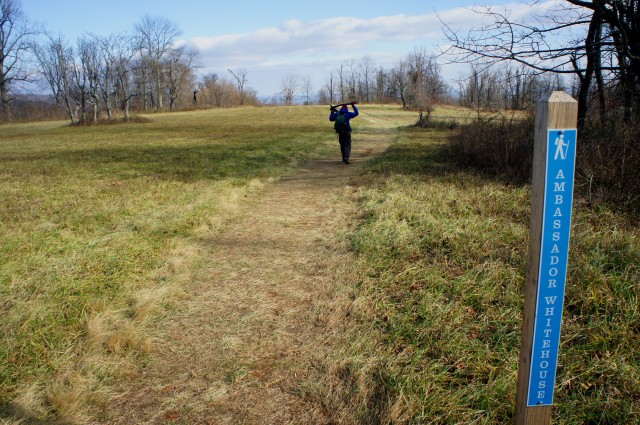 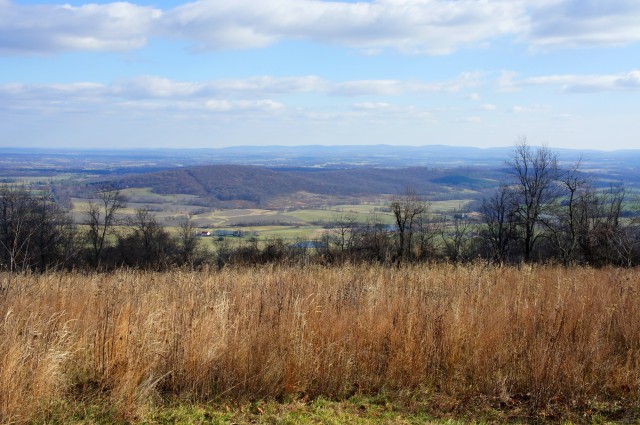 Situated just before a sharp-right hand bend, this overlook offers sweeping views of Paris, a small community of 50 people, situated down in the valley, where Blue Ridge casts a large evening shadow. A bench and picnic table provides a place to stop for a rest and a snack.

Cutting southwest, the Ambassador Whitehouse Trail weaves in and out of brushy meadows before eventually dropping back into the woods and crossing the pipeline clearing again at Mile 4. From here, the trail descends sharply, and hikers soon return to the blue-blazed North Ridge Trail. Take a left, then stay right at the junction with the red-blazed Piedmont Overlook Trail.

Following a short, stone wall on the right, the North Ridge Trail descends to reach arguably the hike’s best vista at 4.3 miles. Emerging onto a sunny hillside, the dusty path provides picturesque views of the northern Piedmont, including tree-studded Lost Mountain, an azure-colored reservoir, and a rustic barn to the southeast.

View of the northern Piedmont from the North Ridge Trail

In the 1750s, the valley below was the stomping grounds of a young surveyor named George Washington, who briefly owned a parcel of land on the slopes of Lost Mountain before becoming an officer in the British colonial army. More than a century later, residents of the area largely avoided the disruption of civil war, though Union and Confederate Armies often traversed the area between battles. Today, the rolling hills are dotted with barns and farmsteads, many preserved almost as they were in the 1800s.

The last 1/3 mile of the North Ridge Trail is all views before it ends back at Boston Mill Road. Take a left and walk the final 1/10 mile to the Park Office, ending the 4.8-mile loop. From here it is short walk back to the Visitor Center and parking area.

Hiking time can vary widely for this loop, depending on physical ability and the number of stops along the way. At a relatively average pace of 2 miles per hour, it’s fair to allot around 2.5-3 hours for the circuit.