The Acadia Mountain Loop is a challenging hike on Acadia National Park’s quieter west side that affords fantastic views of Mount Desert Island, Echo Lake, and Somes Sound. Granite outcrops make for excellent vantage points—but also significant obstacles—on this 2.9-mile stem-and-loop. After summiting the mountain, the trail drops 600 feet to the banks of Somes Sound, then climbs gradually along the Man O’ War Truck Road to return to the trailhead. 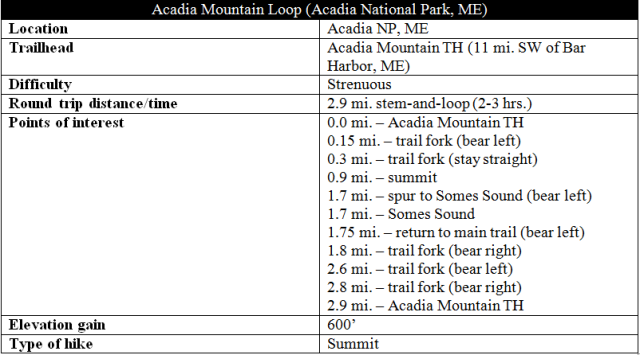 The Acadia Mountain Trailhead, marked with signs along Maine Route 102, is situated three miles north of the town of Southwest Harbor and roughly 11 miles southwest of Bar Harbor, Maine. Coming from Bar Harbor and Acadia’s busy east side, the trailhead will be on your right—a small parking area that doubles as the start of a short trail to Echo Lake Ledges. There is a small bathroom at the site.

The Acadia Mountain hike begins across the street, where a stony staircase ushers in the beginning of the steep climb. Beyond the staircase, a trailside kiosk provides information and a map of the area. Continue east as the route mounts a granite slope; follow the blue blazes. At about 250 yards, the trail forks; bear left on the route to Acadia Mountain. (Note: A right leads to Saint Sauveur Mountain (679’), Valley Peak, and Flying Mountain (284’).)

The northbound section that follows is relatively flat and easy as it winds through dense forest. At 3/10 mile, the trail crosses Man O’ War Truck Road; stay straight on the Acadia Mountain Trail. Enjoy the last respite of level terrain before the path climbs a granite jumble. Over the course of the next half-mile, the trail will gain a mean 450 feet in elevation. At 4/10 mile, a short section of steep steps is the hardest climb of the hike—thereafter the grade lessens but continues to climb steadily.

Pine trees near the summit of Acadia Mountain

Hikers will get their first peek at Somes Sound to the southeast at around 6/10 mile, though it remains obscured by tree cover. At 0.65 mile, the trail ascends a set of granite slabs, followed by another steep climb at around the 3/4-mile mark. After passing under a group of craggy pines, views open up to the west, overlooking Echo Lake and the Beech Cliffs beyond. On clear days, you can see as far as Blue Hill Bay and the Mount Desert Narrows. 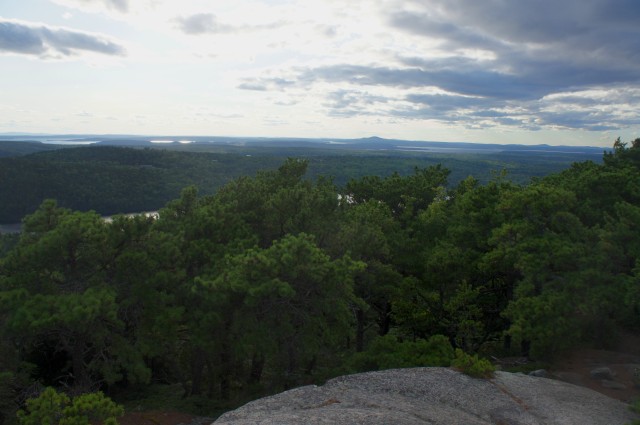 By now the trail has finally leveled off as it scales the upper reaches of Acadia Mountain, culminating in a fantastic view from the summit. (Note: While not technically the highest point on Acadia Mountain—the true summit is to the east—this spot offers the most expansive view of the area.)

Somes Sound unfolds to the south, with Flying Mountain—a photogenic tree-covered hump—jutting out from the west. Somes Sound is an example of a fjard, an inlet formed by a glacial depression that is shallower and lacks the steep walls of the better-known fjord.

In the distance are Southwest Harbor, Greening Island, and the Cranberry Isles, with the Duck Islands visible beyond. On the horizon, the Atlantic Ocean extends into an endless blue. In the foreground, the massive Saint Sauveur Mountain dominates the landscape, with Beech Mountain (841’) to the west. To the left, Norumbega Mountain (850’) rises from the eastern slopes of Somes Sound.

Somes Sound on the descent

After enjoying the panoramic views, continue east on the Acadia Mountain Trail. The path alternates between dirt and stone as it follows the top of a ridgeline, then drops through a stony crevice at about 1.1 miles. Regular views of Somes Sound continue as the trail begins an aggressive descent. Over a half-mile, the route sheds 600 feet in elevation, making for a slow slog that requires careful footing and occasional use of your hands to steady yourself. 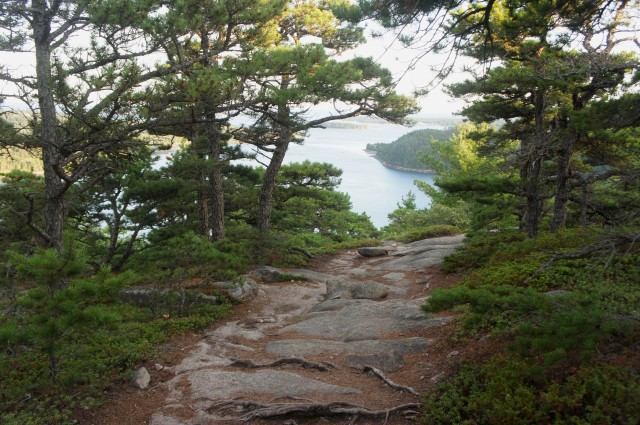 Somes Sound through the trees 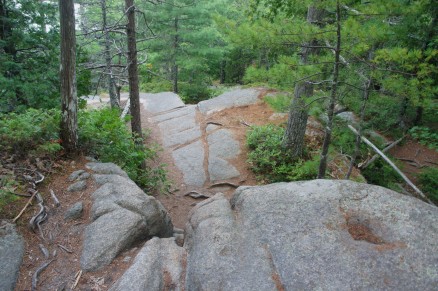 On the steep trail down Acadia Mountain

At about 1.6 miles, the trail levels off and traverses a short bridge over Man O’ War Brook, a gentle perennial stream. Now back in thick woods, take a left at the next fork to follow a short spur down to the banks of Somes Sound. The trail ends at the junction of the sound and Man O’ War Brook, which tumbles over a small waterfall in its final stretches. 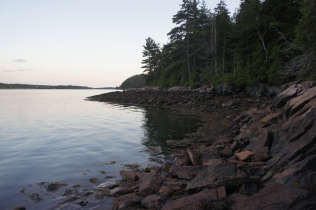 Norumbega Mountain across the sound

Climbing back to the main trail, take a left at the junction, then reach a four-way trail fork at 1.8 miles. Unless you are continuing on to Saint Sauveur Mountain, take a right on the wide and partly graveled Man O’ War Truck Road.

An underwhelming finale, the Man O’ War Truck Road is nonetheless easy and straightforward. At 1.9 mile, the road gradually ascends and the gravel turns to dirt. Stay on this path until around 2.6 miles, the original four-war junction—with the ascent to Acadia Mountain off to the right, while your return route heads left. Retrace your steps on this mild path for 2/10 mile, then bear right and descend the final 250 yards to Route 102 and the Acadia Mountain Trailhead. Take care in crossing the road, as it can be crowded, especially on summer weekends.

All in all, set aside at least 2-2 1/2 hours for the round-trip hike. Despite not even eclipsing three miles, the dramatic elevation changes make the journey slow-going, and you will want to stop to take breaks at the summit and the shores of Somes Sound.

Head south on Route 102 a little farther to try the Beech Cliff Trail, one of four strenuous “iron rung” routes in Acadia.