The Beech Cliff Trail, situated in Acadia National Park’s peaceful western section, is one of the park’s four “iron rung routes”: strenuous climbs that require negotiating ladders, iron aides, and steep granite staircases to mount exposed cliff sides. Compared with the other three, the Beech Cliff Trail is arguably the least harrowing: the biggest obstacles are a series of sturdy ladders, and no real rock scrambling is required. (Note: Those with a fear of heights, however, should probably avoid, and proper footgear for all hikers is a must.) Once atop the cliffs, hikers are rewarded with outstanding views of Echo Lake and the surrounding mountains; the best vistas are on the Beech Cliff Loop, while a casual descent down the winding Canada Cliffs Trail offers an alternative, ladder-less return to the trailhead.

The vast majority of visitors at the Echo Lake parking area are there for one thing: to swim. The only lifeguarded beach on the west side of the park, Echo Lake Beach can be sprawling with people on a summer day. So think ahead—arrive early or late in the day to get a parking spot, or take the free park shuttle. Once on the trail, however, the crowds will dissipate—a welcome luxury of Acadia’s “quiet” west side. (Note: That is, quiet compared to its raucous eastern cousin.)

The hike begins at the end of the road at Echo Lake Beach, a small cul-de-sac with a single stone staircase leading down to a trail junction. To the right is the beach; to the left is the Beech Cliff Trail, which will cover nearly 450 feet in elevation in the next 4/10 mile. The path begins easy enough, cutting through dense forest, with the lake partly visible through the thicket to the right. After 175 yards, the climb begins in earnest as it rounds a left-hand bend. At 2/10 mile, hikers will pass a rocky jumble to the left, then cross a second rock slide at the 1/4-mile mark. Here a short spur bears off to the right—a teaser of what’s to come, a viewpoint offers a bird’s eye view of Echo Lake Beach and the valley below. 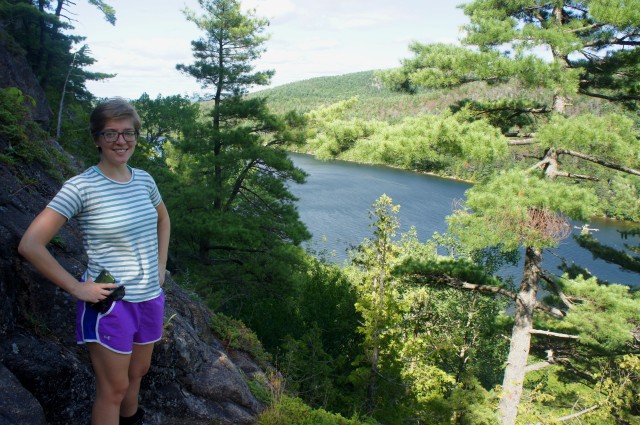 Returning to the main trail, the grade steepens as the Beech Cliff Trail again traverses the rock slide. (Note: Neatly arranged stone steps ease the burden of what otherwise would be a rock scramble.) Back in dense trees, the trail cuts south, hugging the shady hillside on the right. After rounding a right-hand bend, hikers must duck under a low-hanging tree at about the 1/3 mile mark. Just beyond is the first of four metal ladders on the trail—this one only about 8 or 9 feet tall, making it the shortest of the bunch.

First of four ladders on the Beech Cliff Trail

Around the corner from the ladder, the trail hugs the base of a 40- to 50-foot perpendicular cliff, a beautiful face of granite that would seemingly be a climber’s paradise. Paralleling the cliff for about 75 yards leads to the second ladder, this one about 15 to 20 feet high.

From here hikers will ascend a steep stone staircase with metal railings, followed by the final ladder sequence: back-to-back climbs through a shaded notch. It’s a short jaunt from here to the top of the cliffs, where a beautiful view awaits.

Steep climb to the 3rd ladder

Pair of ladders on the Beech Cliff Trail

The Beech Cliffs tower several hundred feet above Echo Lake, where beachgoers appear but tiny specks from this lofty vantage point. Behind Echo Lake is Acadia Mountain (655’) and Saint Sauveur Mountain (690’), which conceal Somes Sound behind them. To the southeast, the view reaches as far as the Atlantic Ocean and the Cranberry Isles.

Atop the Beech Cliff Trail

The views are even better on the Beech Cliff Loop, an easy meander that begins where the strenuous Beech Cliff Trail ends. Take a right at the top of the cliffs, following the trail to another junction after around 50 yards. Take another right to head back to the edge, where vistas open up to the north, and the entirety of Echo Lake unfolds below. In the distance, the northern tip of Somes Sound comes into view, with Mount Desert Island’s mountainous east side beyond.

Looking south toward the Cranberry Isles

Just before 6/10 mile, the trail bends left and leaves the cliff’s edge. Crossing a granite slab with some limited views, this is the summit and the highest point on the hike. The loop ends seconds later at the trail junction; stay straight as the path returns to the original viewpoint.

View from the Beech Cliff Loop

From here you have a choice – return down the steep ladders of the Beech Cliff Trail (not recommended) or continue straight onto the Canada Cliffs Trail, a 1-mile alternative that leads back to the same trailhead. The Canada Cliffs Trail darts into the woods, interrupted by a brief sunny clearing at 0.85 mile, then begins a steady descent amid spruces and pines. At 1.2 miles, the trail rounds a sharp, right-hand bend and heads north to another junction situated near the head of a water-soaked ravine. Take a left, continuing on a “new” path that does not appear on many more dated maps. (Note: for example, it is not shown on the National Geographic Trails Illustrated map of Acadia. However, the signs are clear and easy to follow—“Echo Lake Parking” to the left.) 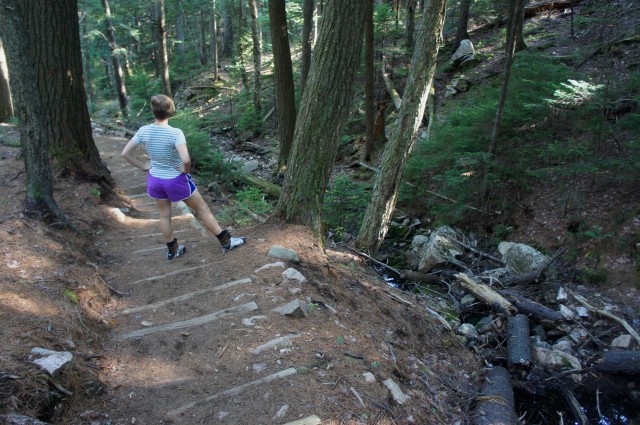 Heading down the Canada Cliffs Trail

Beyond the junction, the Canada Cliffs Trail descends gradually, crossing a minor creek twice. As the path bends eastward, the grade steepens, making haste for the valley below. The incline disappears around 1.6 miles, with an unpaved road visible through the trees. Stay straight at the next trail fork, where a spur to Lurvey Spring Road bears off to the right. From here the path follows the base of the Canada Cliffs (barely visible through the thicket to the left) and emerges at the Echo Lake parking area at 1.8 miles. (Note: The trail spits out well south of the start; you will likely be parked somewhere in between.)