Hedge Creek Falls is a popular destination in northern California’s Trinity Range, situated just off Interstate 5 between Redding and Mount Shasta. A short, well-worn trail in Dunsmuir, California offers access to this 35-foot waterfall, one of many in the region but definitely one of the most easily accessible. Beyond the falls, the trail continues down Hedge Creek to its confluence with the Sacramento River, where an overlook provides views upriver toward snowy Mount Shasta.

The short hike to the falls begins just off Interstate 5 at Exit 732. From the exit, bear north to Dunsmuir Avenue and take a right; the parking area will be on the right. Across the street, look for the sign for “Hedge Creek Falls”—creatively carved as a locomotive—marking the start of the trail.

Just beyond the trail’s start is a small, grassy picnic area—complete with a gazebo and water fountain—that is perched on the edge of a woody canyon. The Hedge Creek Falls Trail bears off to the right, dropping behind a large hemlock tree. The descent is quick and sharp as the path bears east.

Within minutes, the sounds of rushing water can heard, and one can sneak a peek at the waterfall at the end of a first switchback. The trail briefly doubles back to the west, then rounds a second bend and continues on its eastward course. After just 250 yards of hiking, the path approaches Hedge Creek Falls.

Hedge Creek Falls from behind

The waterfall is a single chute that drops 35 feet into a cavernous pool. The trail leads right up to the falls and circles it from behind, offering a cool place to take in the beautiful sight. The cliff from which the falls drops is composed of columnar basalt, a legacy of the area’s volcanic past.

While Hedge Creek Falls is the main attraction, the trail is only halfway done. After wrapping around the falls, the footpath hugs Hedge Creek as it bears downstream over a series of minor cascades. Culminating at 3/10 mile, the path ends abruptly at a viewing platform overlooking the confluence of Hedge Creek and the Sacramento River. On clear days, Mount Shasta (14,180’) looms in the distance, though it is obscured by trees, while an active railroad lines the opposite bank. (Note: To get an untarnished vista of Mount Shasta, climb the rocky jumble to the right of the observation deck. The extra height gets you above the trees and offers a clear view of the snowy behemoth.)

Sacramento River from the observation deck 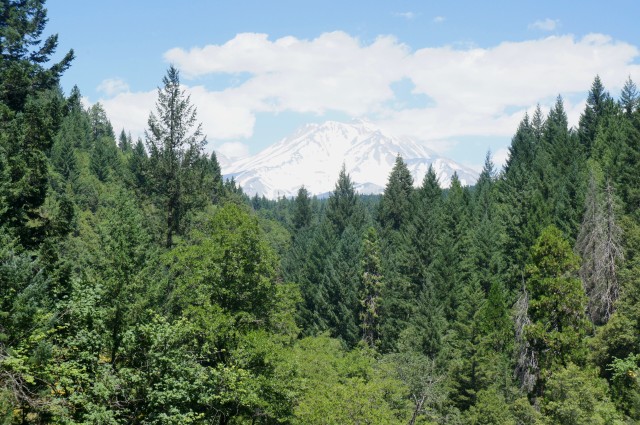 The observation deck marks the end of the trail; retrace your steps for 3/10 mile to return to the parking area, climbing roughly 150 feet in elevation. Allot at least 20-30 minutes for the round-trip.