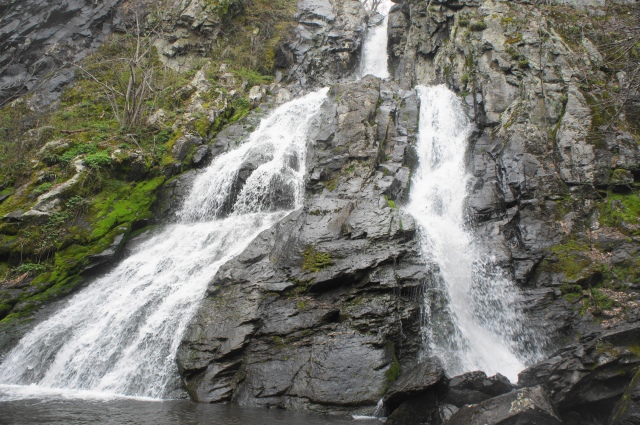 At its peak flow in spring, South River Falls in Shenandoah National Park is easily one of Virginia’s most spectacular waterfalls. Here the South River, barely a trickle a mile upstream, catapults 83 feet down a two-tiered drop, forming a thundering sound that reverberates throughout the rocky gorge. Most hikers turn around at the first overlook of the falls, 1.3 miles from the trailhead at the South River Picnic Area. This is a mistake: while the views are partly obscured from this vista, it is worth adding an hour of hiking time to trek down to the base of the falls—a blissful cove that is one of the most idyllic spots in Shenandoah. Make the hike into a circuit by taking the South River Fire Road and Appalachian Trail back to the start, forming a 4.7-mile stem-and-loop. Note: Hike in spring or after recent rain/snowfall for the best flow. 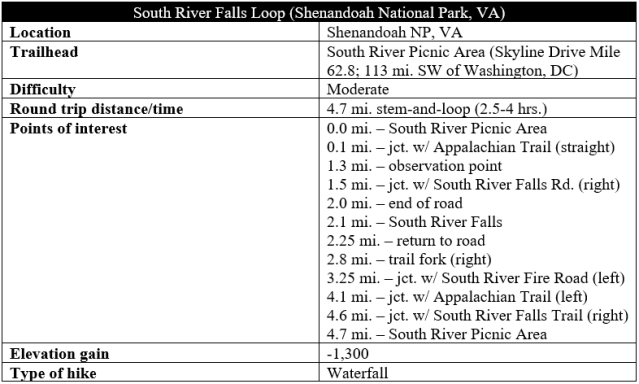 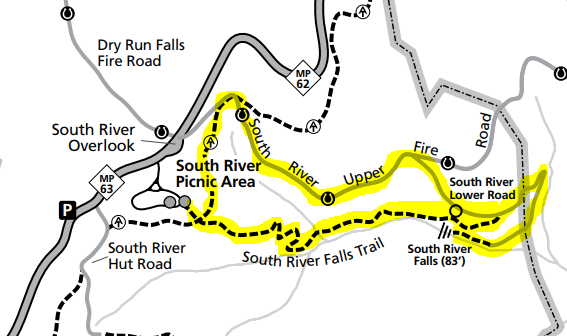 The moderately difficult hike to Shenandoah’s third-tallest waterfall starts and ends at the South River Picnic Area, situated in the park’s Central District roughly three miles north of the park entrance at Swift Run Gap. Note: Parking is relatively ubiquitous; just keep driving around the one-way circle until you find a spot. The marked trailhead is situated in the southeast corner of the picnic area, next to the pit toilets. 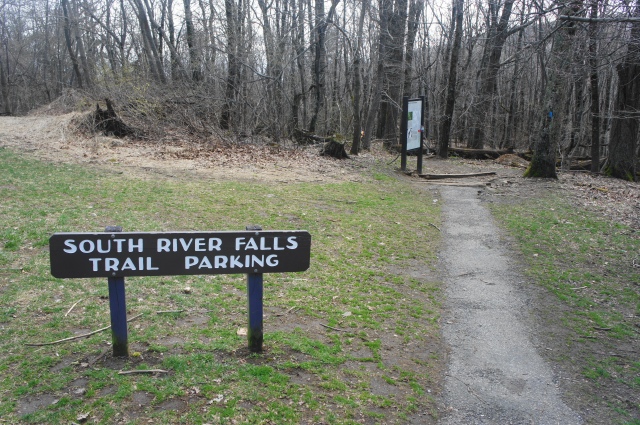 The blue-blazed South River Falls Trail quickly plunges into the woods, dropping to a junction with the Appalachian Trail (AT) within about 150 yards. For now, stay straight—you will return to the AT later. Continuing downhill, the incline steepens. As you descend more than 50 wooden steps, the faint sounds of the South River gradually come within earshot, and peeks through the trees reveal mighty Saddleback Mountain (3,081’) to the south. 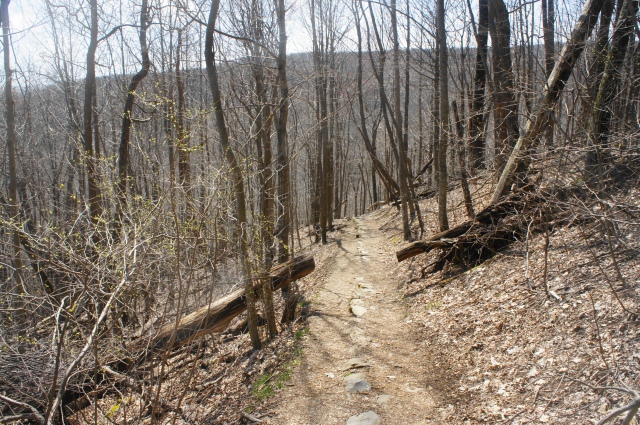 After a brief respite from the rapid descent, the trail enters a series of winding bends at around 4/10 mile. Moss-laden outcrops become increasingly common, while the noise of the river becomes clearer. By 6/10 mile, hikers can spot the flowing water below on the left; a left-hand bend and short descent brings you to the edge of the South River—here merely a small and relatively calm stream.

It’s hard to believe that this small brook will soon become a rushing waterfall, but sure enough, as the South River Falls Trail follows the water eastward, the creek gradually picks up steam. The relatively level route traverses a boulder-choked tributary at around the ¾-mile mark, then the path cuts away from the water, briefly putting the stream out of view. As the stream returns trailside, it has more oomph than before, and minor cascades become increasingly frequent. 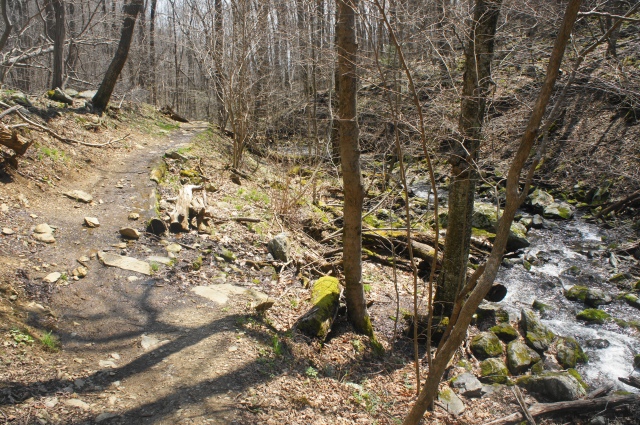 Cross another tributary at 1.2 miles, then climb uphill, passing a rock outcrop on the right. At last, the sounds of the waterfall become unmistakable and the trail reaches the falls observation point at 1.3 miles. This often-crowded viewpoint offers a decent view of South River Falls, although only a teaser for what it is to come. Take a picture or two and move on. 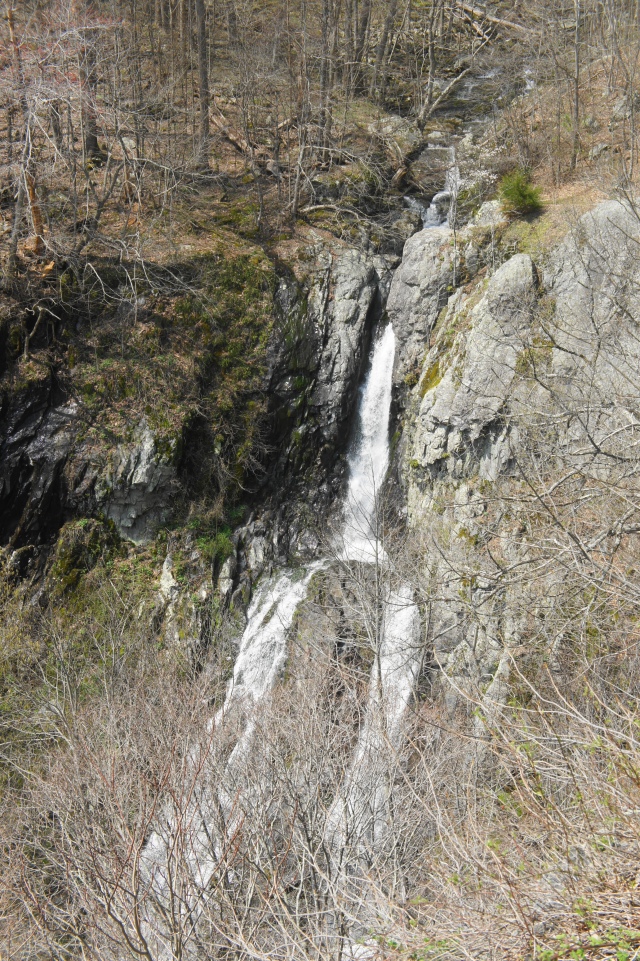 After the overlook, the trail climbs uphill and rounds a left-hand bend, revealing obscured views of the mountain gap below. Hugging the southern slopes of Bald Face Mountain, the South River Falls Trail intersects with the South River Falls Road, an old fire road (closed to vehicles), at about 1.5 miles. 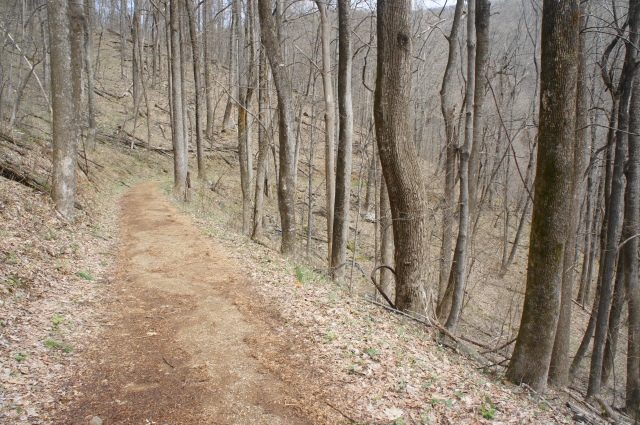 To reach the base of South River Falls, head right on the fire road to begin a roughly 1.3-mile out-and-back detour. The wide road descends steadily into a side gully with views of a terrific, cascading tributary that would be a worthy destination in itself. After 350 yards, the path rounds a sharp bend, coming parallel with the stream, now on the left. From here the road continues to shed elevation, finally reaching the bottom of the main canyon—carved by the South River—at around the two miles from the trailhead.

The road ends abruptly at this point, giving way instead to a narrow and strenuous single-track trail that climbs sharply upward. With the rushing stream on your left, follow the path as it mounts a series of stony steps—use caution as they can be very slippery. Around a couple minutes in, hikers approach a beautiful, multi-tiered cascade that slides down the greenstone into a picturesque pool. 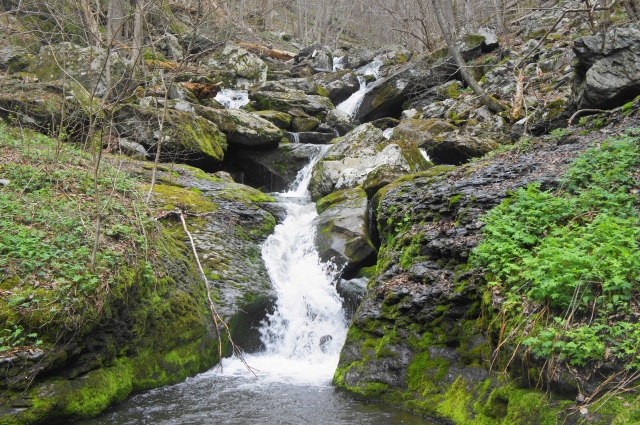 Cascades along the way to South River Falls

From here, the blue-blazed trail climbs a steep staircase, approaching the foot of the gray canyon walls. Around 2.1 miles from the trailhead, the path finally ends at the base of majestic South River Falls. Here the stream drops 83 feet, initially in one free-falling drop, then split between two gushing chutes. In summer, it is possible to wade in the pool at the base of the falls or—for those preferring dry land—an abundance of rocks offers the chance to sit down for a snack with a view. 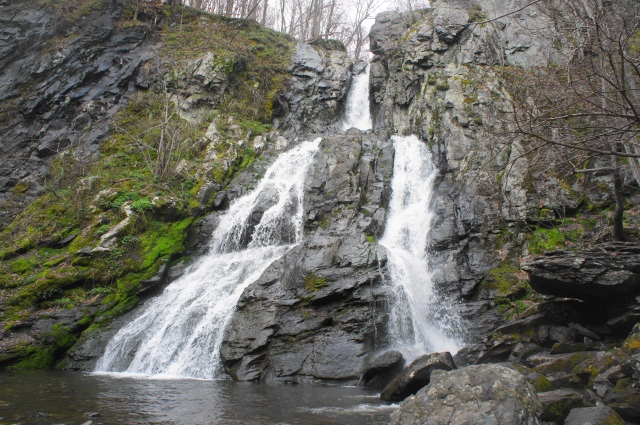 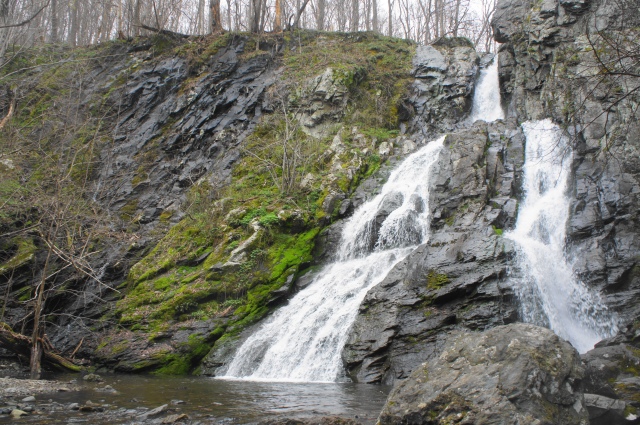 Leaving one of the best waterfalls in the park can be difficult, but when you are ready, head back the way you came up South River Falls Road. Returning to the junction with the South River Falls Trail, you can bear left and retrace your steps back to the trailhead or stay right on the fire road as it winds uphill along the wooded slopes of Bald Face Mountain. This circuit option entails a largely uneventful climb but at least offers some variety from the pure out-and-back. At 3.25 miles, the wide track merges with the South River Upper Fire Road; bear left at the fork. Pass over a minor tributary a minute later, then continue the steady slog westward for another ¾ mile. At 4.1 miles, just as the road crosses a wooded gully, cut left on the white-blazed Appalachian Trail. This south-bound path gains more elevation, then briefly drops to clear a low dip before climbing mildly again. By now you can hear the cars on Skyline Drive to the right. 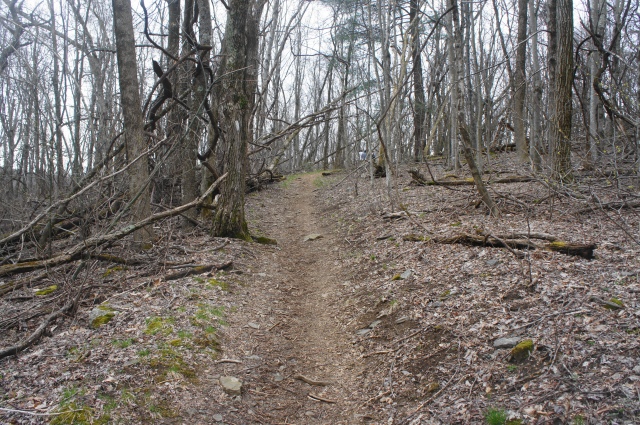 At last, the AT reaches the initial junction with the South River Falls Trail. Bear right, following the path uphill back to the South River Picnic Area. All told, the stem-and-loop hike, including the climb down to the base of the falls, comes out to about 4.7 miles. Hikers should allot at least 2 ½ hours for this journey.