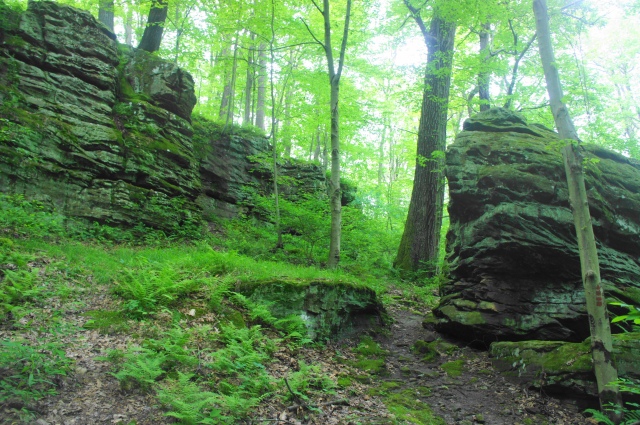 What precisely happened on May 28, 1754 at Jumonville Glen in southwestern Pennsylvania remains unknown to this day. British forces led by a young Lieutenant Colonel George Washington claimed that, when they encountered a French contingent encamped at the base of a cliff, the French fired first. The French forces, commanded at the time by Joseph Coulon de Villiers de Jumonville, claimed that Washington’s forces surrounded and massacred them while they were resting. Whatever the reality, the results were profound: the short skirmish—which killed 13 French soldiers and one of Washington’s—kicked off a war between the two European powers that would last until 1763. The French and Indian War, beginning here at Jumonville Glen, would help cement British control of North America, until the Revolutionary War two decades later.

Today, the shady glen is preserved as part of Fort Necessity National Battlefield, situated in the Laurel Highlands of southwest Pennsylvania. (Note: The Jumonville Glen Unit is located 8 miles northwest of the main battlefield grounds.) A brief but pleasant loop hike encircles the area where the skirmish occurred: in addition to the historical relevance, the rocky sandstone ledges are interesting in themselves. 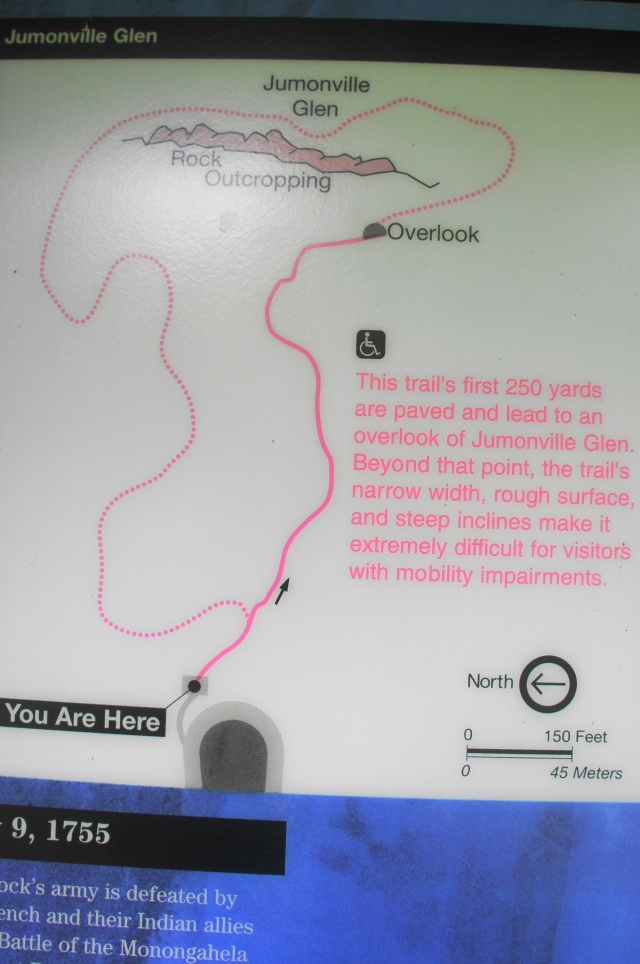 Behind a covered information kiosk, the short trail to Jumonville Glen begins as a well-paved track into the wilderness. Stay on the pavement as the path forks, saving the interpretive sign (“From Jumonville to a World War”) for the end of the circuit. From here the modern, asphalted track bisects an old roadbed—remains of the famed Braddock Road, which was built in 1755 to transport British forces during the ensuing French and Indian War. (Note: The trace was named for Major General Edward Braddock, Washington’s commander who died during the Battle of the Monongahela in 1755.) 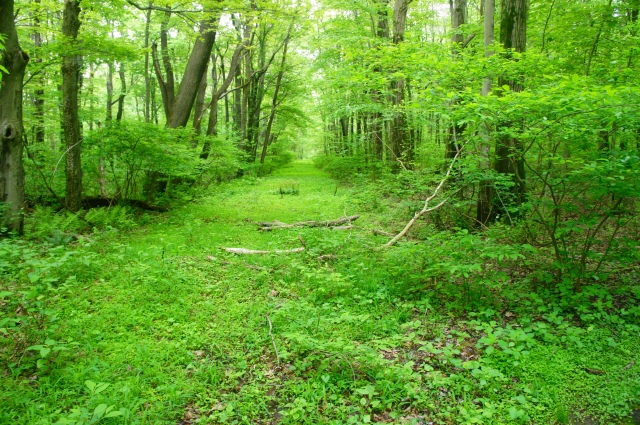 Heading southward, the trail gradually descends amid thick forest, then bears east. Ferns, chestnut oaks, birches, and maples dot the landscape. At about 250 yards, hikers will come across a minor monument to George Washington, revealing that the Jumonville Glen area is also known as “Washington’s Rocks.” 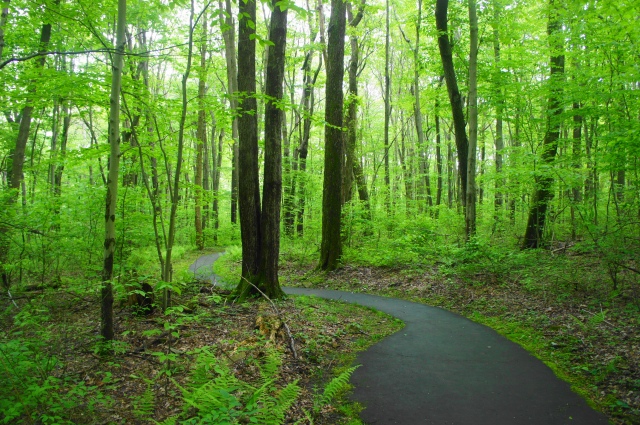 The pavement ends at an overlook about 50 yards farther, where an interpretive sign sets the stage for the battle on May 28, 1754: having heard that a group of French soldiers was in the vicinity, Washington and about 40 men formed a raiding party, setting out to investigate. As they approached, they spotted the French party at the base of this glen, ostensibly resting: what were their intentions? To spy or to negotiate? Washington and his native Iroquois allies prepared their approach…

After the overlook, the pavement disappears, transforming into a dirt, rocky single-track. Follow this path as it descends, switchbacking down the hill to the base of the sandstone ledges. Here, about 1/3 mile into the hike, was the site of the French encampment. A second interpretive sign picks up the story… 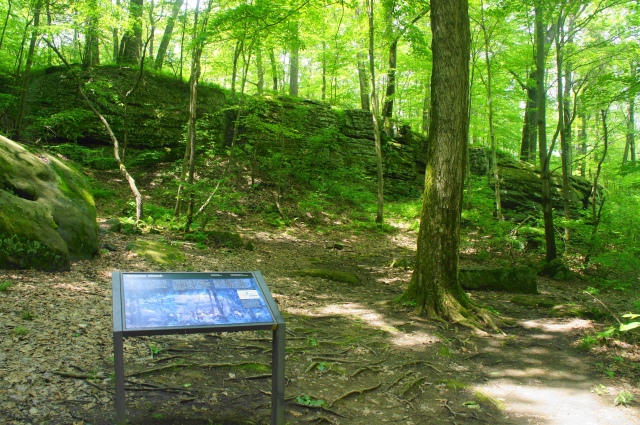 Base of the cliffs at Jumonville Glen

On the morning of May 28, as the 32 French troops prepared breakfast, they were suddenly startled by the presence of the British and Iroquois soldiers. Who shot first remains a mystery, but the French were quickly drawn into a volley of fire. The entire skirmish lasted only 15 minutes, but 13 Frenchmen were mortally wounded, including Jumonville, the group’s commanding officer.

At this spot, hikers can peer up at the rock outcrops, the enviable position held by about 20 British soldiers during the short battle. Washington and 10 others entered from the woods off to the left, while Tanacharison and Monacatootha led a contingent of Iroquois warriors from the right.

When the dust settled, all but one of the surviving French forces were held prisoner (one escaped back to Fort Duquesne to alert the French command), and the representatives of New France were outraged, demanding retribution for what they viewed as an unjustified slaughter. Washington’s raid at Jumonville Glen would come back to haunt him weeks later, when the French easily overran Washington’s field headquarters at Fort Necessity on July 3. (Note: Unknown to Washington (who could not read French), the surrender papers he signed included a provision that held him personally responsible for the death of Jumonville on May 28.) 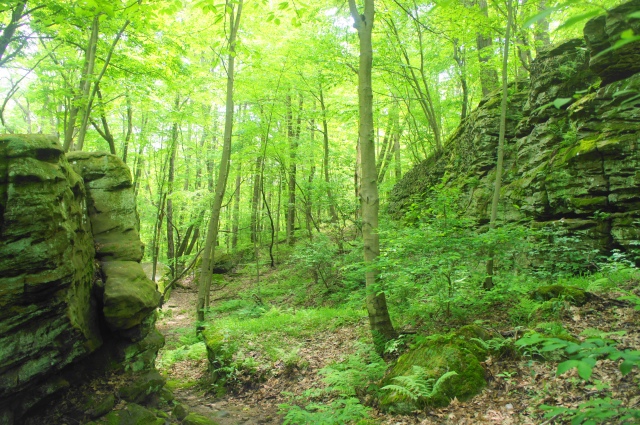 Climbing through a notch at Jumonville Glen

From the interpretive sign, bear left on a dirt path that hugs the base of the cliffs, ignoring a social trail that heads right. The route cuts through a notch in the ledges of Pottsville sandstone, then descends. Another small outcrop requires a minor ascent to evade. Several social trails veer off from around here; stay generally left on the most well-trodden of the bunch. 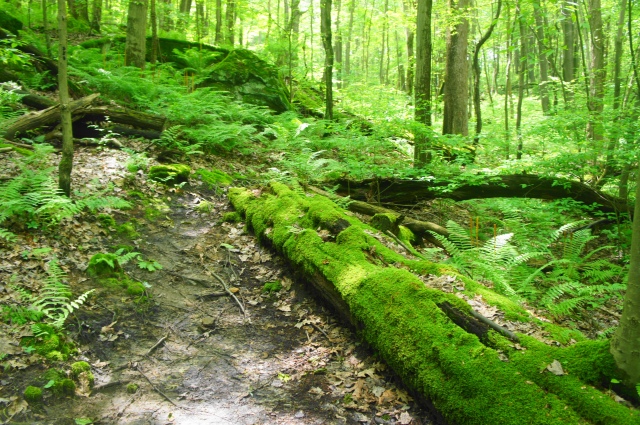 Jumonville Glen Trail as it meanders back to the start

At 4/10 mile, ascend a set of stone steps then swing around a bend, reclaiming the high ground above the cliffs. From here the path follows a ravine on the right that is choked with vegetation. Through gradual meandering, the trail weaves its way back to the initial junction. The interpretive sign here discusses the consequences of the skirmish: the subsequent Battle of Fort Necessity and the start of a global war. The French and Indian War morphed into a broader conflict in 1756 with the opening of a European Theater that came to be known as the Seven Years’ War.

At this final junction, bear right and return to the parking area. Allot around 30-45 minutes for the entire circuit.