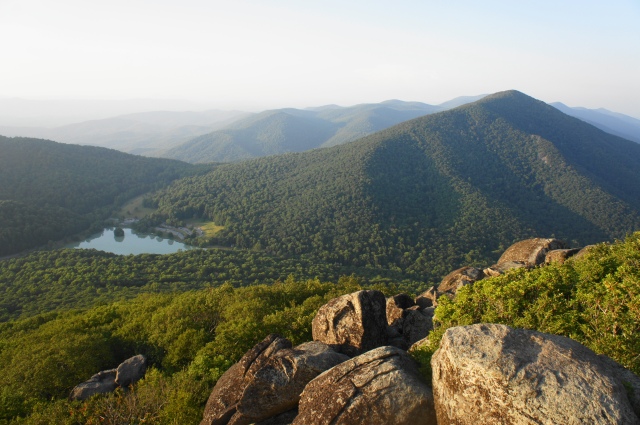 Viewed from the valley below, Sharp Top (3,862’) in central Virginia is an imposing peak, once thought by 19th century Virginians to be the highest point in the state. Although later surveyors found this not to be true (the honors go to Mount Rogers at 5,728’), Sharp Top remains a popular destination for hikers seeking sweeping views of the Peaks of Otter Recreation Area in the heart of the Blue Ridge Mountains. The 1.5-mile ascent to the summit is straightforward but brutal, covering an elevation gain of more than 1,300 feet. Along the way, consider a slight detour to Buzzard’s Roost, a collection of rock outcrops with a commanding vista.

After loading up with water and snacks, follow the well-marked signs to the start of the trail, which begins as a neatly-constructed stone staircase. An interpretive sign tells the story of Sharp Top, including its long-held misrepresentation as the highest peak in Virginia. Sharp Top was a landmark well-known to early pioneers of the area, and, during the construction of the Washington Monument in Washington, DC, Virginia residents sent a stone from the peak to be placed in the obelisk.

After some initial steps, the Sharp Top Trail quickly comes to a junction, with a spur trail heading left to the Peaks of Otter Campground. Stay straight as the path enters deep woods. After about 200 yards, the incline eases slightly, and the footpath bends right along a heavily-vegetated slope.

At 2/10 mile, the wide path crosses a paved road (the route of the shuttle bus) and then enters a mild uphill as it wraps around a left-hand bend. The path soon passes under a canopy of mountain laurel and settles into a steady ascent. Rocks become more abundant as the trail traverses a green gully, with largely obscured views to the west. 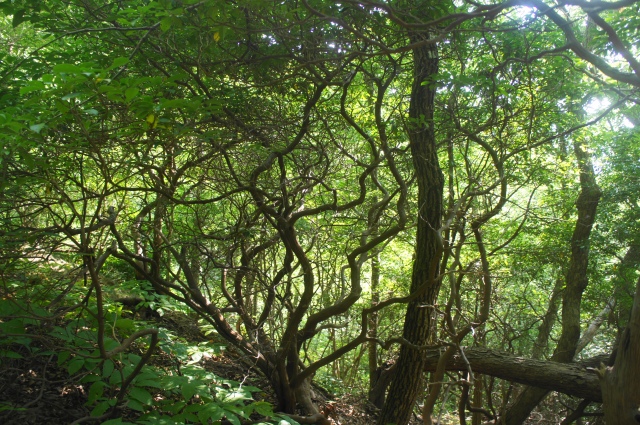 After passing the half-mile mark, the ascending trail climbs a pair of switchbacks at the base of a 15- to 20-foot rock outcrop, then leads into a left-hand horseshoe bend. A couple more stone staircases lead up to a relative straightaway that nonetheless continues to climb persistently up a woody ridgeline. Two more narrow but short staircases give way to a left-hand switchback at ¾ mile. Here the first real views emerge: hikers can peer west toward McFalls Mountain and Campbells Mountain (2,414’), with the principal Blue Ridge just beyond. 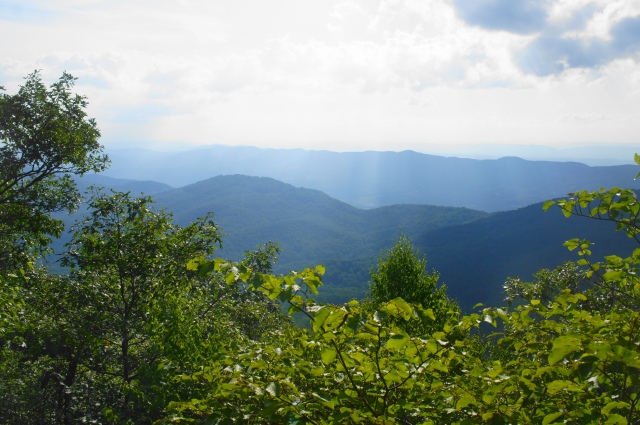 First views above the trees along the Sharp Top Trail

Additional switchbacks and well-crafted stone stairs lead to the base of a rock outcrop at about 9/10 miles that, from a rear angle, looks like a nest of mammoth-sized eggs. As the incline eases, one can peer up to the left to a row of cliffs—this is near the summit of Sharp Top. But the trail here remains about 400 feet below the summit, requiring the path to swing around to the south to a high gap to clear the cliffs. For a brief moment at the 1-mile mark, the trail actually dips to clear a rock field, and the size of the boulders gets noticeably larger just beyond.

At 1.1 miles, the rock boulders temporarily disappear, and the now relatively smooth and level path reaches a high saddle where there is a trail junction. While the Sharp Top Trail continues left, consider heading right first on the short spur to Buzzard’s Roost, where exposed rock outcrops offer excellent views of the Blue Ridge Mountains and Piedmont plateau to the west and south. You can also, from this vantage point, view the summit of Sharp Top to the north. 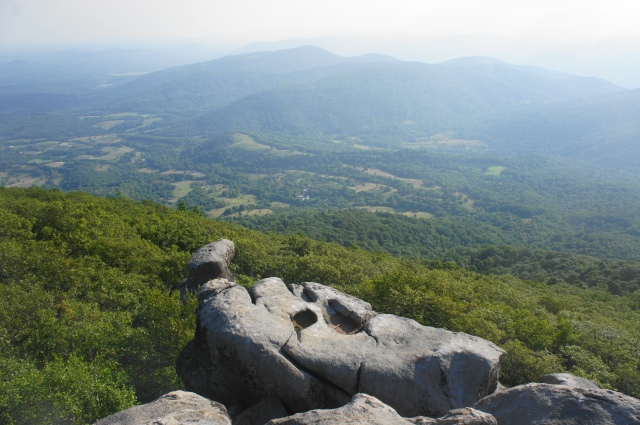 Sharp Top from the viewpoint at Buzzard’s Roost

Southeast toward the Piedmont

From Buzzard’s Roost, return on the 1/10-mile spur back to the trail junction, this time continuing right for the final approach to Sharp Top. The uphill path continues to weave among rock outcrops and is occasionally even asphalted. Guardrails assist with the climb in a couple areas as the path switchbacks up the mountain. At 1.5 miles (including the spur to Buzzard’s Roost), the trail dips down through a rocky notch, followed by more stone staircases. Within around 200 yards, the trail splits, with a spur heading left to the upper terminus of the shuttle bus. Continue straight to Sharp Top.

Stay right at another junction at 1.65 miles, this time with the summit now visible ahead. Pass a sign built by the National Park Service on the right (“Weather at Work”), as well as an old and empty cabin. Beyond, a final set of staircases provides easy access around a jumble of boulders to the summit—3,862 feet above sea level.

The various viewing areas atop Sharp Top offer views in all directions. The most striking views are to the north, looking across Abbott Lake and Peaks of Otter Lodge to Harkening Hill (3,372’) and Flat Top Mountain (4,001’). The Blue Ridge Mountains continue to the horizon to the northeast, while the Shenandoah Valley unfolds to the northwest. 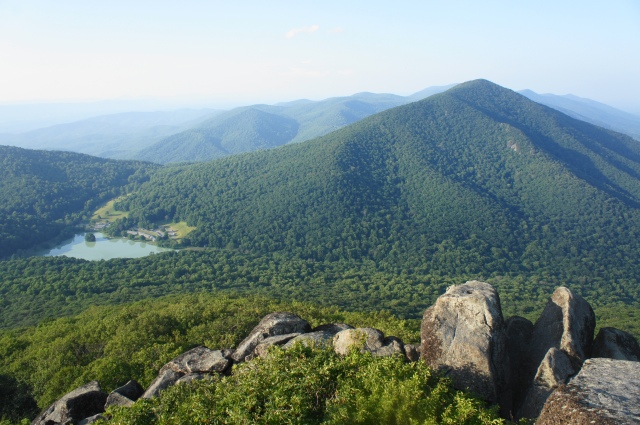 Looking east, the mountains give way to small hills and flats—the Virginia Piedmont—which continue eastward toward Lynchburg and Richmond. The southward views are partly obscured (they are better at Buzzard’s Roost), but, like the northerly vista, the Blue Ridge Mountains disappear into the horizon. 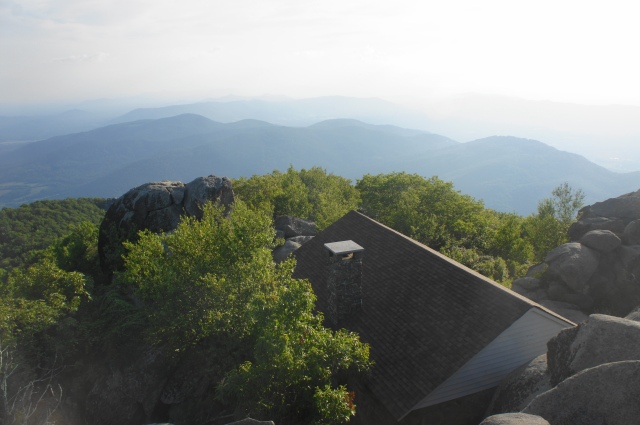 The views from Sharp Top are particularly stunning at sunrise and sunset and, of course, as the fall colors alight the slopes with bright yellows, oranges, and reds. 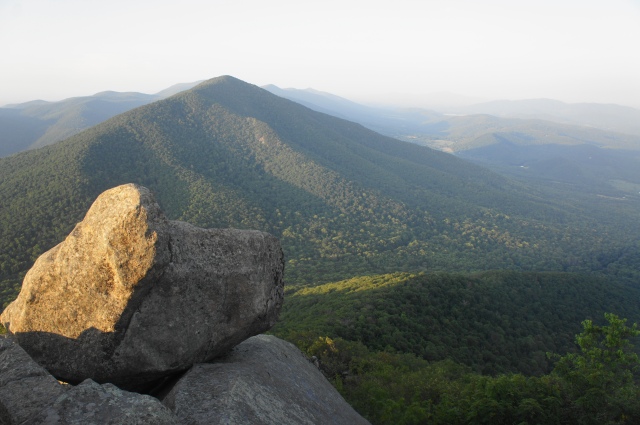 Sun beginning to set on the Peaks of Otter area

Once ready to return, head back the way you came, carefully weaving down the seemingly endless stone staircases to the trailhead. Hiking time for the Sharp Top Trail varies widely by fitness level: quick hikers can complete the round-trip in about 2-2.5 hours, while most will require more than three hours because of the slow pace induced by the relentless climb.