Posted on September 7, 2019 by Andrew Wojtanik

Following a volcanic eruption, underground lava tubes serve as thoroughfares for draining molten lava. When the lava cools and remaining flows drain out of the tubes, the subterranean passageways remain, leaving behind caves to explore. There are several spots in the United States to see lava tubes, including Lava Beds National Monument in northern California, Newberry National Volcanic Monument in central Oregon, and, of course, Hawaii Volcanoes National Park on the Big Island of Hawaii. Another less known spot is Craters of the Moon National Monument in south-central Idaho, where relatively recent volcanic activity (15,000-2,000 years ago) left behind a lunar-like landscape on the northern fringes of the Snake River Basin. The 1.5-mile Caves Trail provides access to four cool, dark lava tubes, while the surface hike traverses an interesting mix of aa and pahoehoe lava flows.

Map of Caves Trail, Craters of the Moon National Monument

Caving is a popular activity at Idaho’s Craters of the Moon National Monument, but all spelunkers must first obtain a free permit at the Visitor Center situated at the start of the Loop Drive Tour. (Note: Because of the spread of white nose syndrome among bats, the park ranger at the time of the author’s visit in August 2019 were requiring that hikers seeking a cave permit must wear shoes that have never been in another cave previously.)

After obtaining a permit (a simple bat-shaped stamp), visitors can reach the Caves Trailhead only after driving most of the way around the one-way Loop Road through the park. Expect to see plenty of crowds at the trailhead on sunny summer days and weekends, with groups of kids flocking to the caves with their headlamps in tow. Be sure to wear sturdy, close-toed shoes, a jacket, and carry a flashlight or headlamp of your own before setting off on the Caves Trail, as the lava tubes are rocky, chilly, and, in some cases, pitch black. 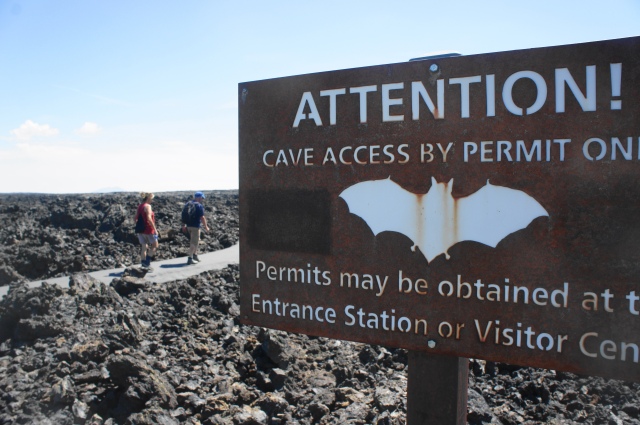 Start of the Caves Trail, Craters of the Moon National Monument

From the parking area, a paved, easy-to-follow path bears southwest across a craggy field of aa lava, part of the so-called Serrate Flow. The peaks to the north and east are the Pioneer Mountains and Lost River Range, while the tree-studded cinder cone to the south is Big Cinder Butte (6,515’), the highest volcanic feature at Craters of the Moon. After around 250 yards of hiking in the exposed sun, the trail cuts through a ridge of uplifted lava rock and traverses a small trench on the left. Shortly after, the lava turns from aa to pahoehoe, a smoother alternative. At 2/10 mile, an interpretive sign on the right explains the features of lava tubes. 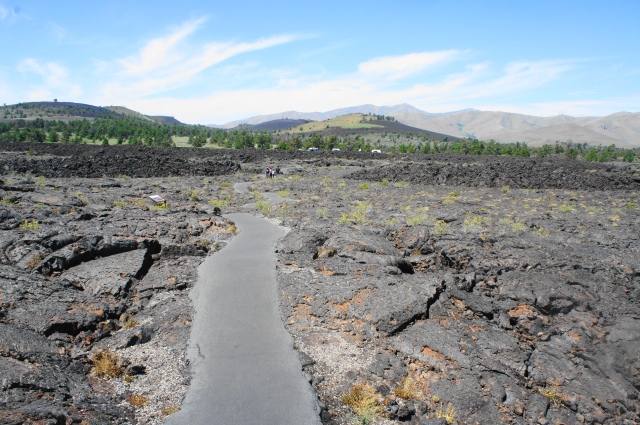 Looking back at the Caves Trail, toward the parking are and Pioneer Mountains

Finally, at 3/10 mile, hikers will reach a trail junction, which doubles as the entrance area for Dewdrop Cave. This introductory cave is the shortest of the four and requires some minor scrambling to negotiate. Inside, there is a blocked-off section with green-tinted rock, while the main draw is the small water droplets inside the cave that give it its name. Also look for smooth pahoehoe flows, where the lava appears to have cooled after flowing over itself, forming slippery tube-like pillars. 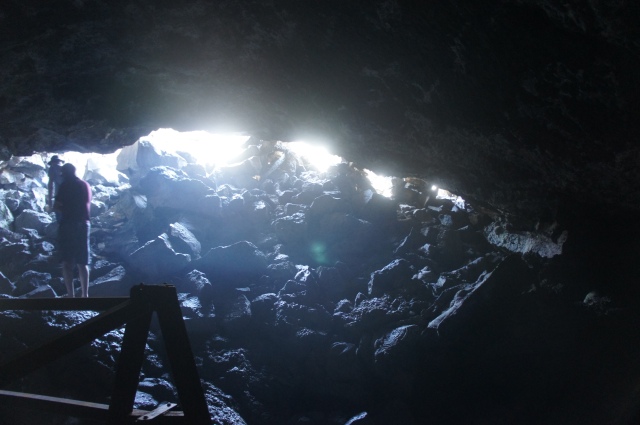 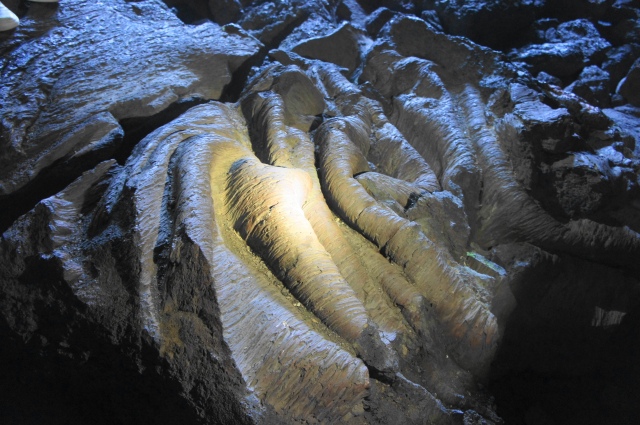 Back on the surface, bear right at the trail junction, heading in the direction of the second and most interesting of the lava tubes, Indian Tunnel Cave. At 4/10 mile, the well-trodden path passes over a section where the cave has collapsed on both sides—the natural end for all lava tubes with fragile ceilings. At 0.45 mile, another cave entrance is visible on the right. Venture a little further to the official start of the Indian Tunnel Cave. 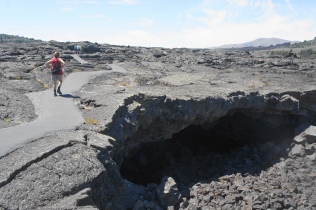 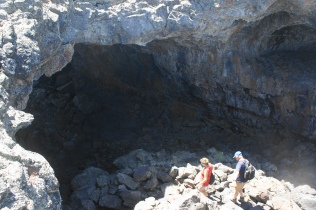 Indian Tunnel is not a traditional cave, per se, as several collapses over time have spliced the lava tube into several sections, none of which is fully dark. It is these patches of light, however, in addition to the tunnel’s high and wide passage, that make this the most interesting cave of the four. To begin, descend the staircase into the broad tunnel, then follow the cave straight, passing under the first overhang. The iron tinge on the ceilings gives the cave a slight orange hue, a welcome contrast to the otherwise black and gray landscape.

Just beyond the entrance to Indian Tunnel Cave

After skirting a rock jumble under a skylight, the cave darkens and narrows slightly—follow the path of least resistance to avoid the craggy surface rocks. The darkness is interrupted after a hundred yards or so by another skylight, this one leaving behind a boulder mass that requires some minor scrambling to clear. After a couple short cave sections, the trail makes way for the exit—a tiny wedge through a double-arched passageway, requiring hikers to duck their heads awkwardly, then pull themselves up out of the small tunnel. 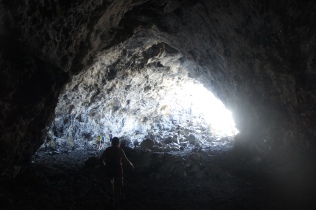 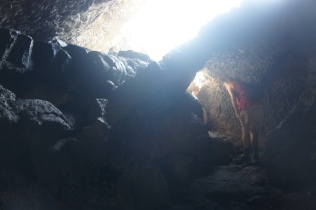 From here, it is a straightforward walk back up to the surface. Once out of the cave, follow a series of stakes in the ground to make your way back to the initial entrance of the Indian Tunnel Cave. Then, once back on the paved trail, head back to the trail junction at Dewdrop Cave; this time, turn right toward Boy Scout and Beauty Caves.

From the junction, it is roughly 250 yards across pahoehoe lava flows to the petite entrance to Boy Scout Cave on the left. This small passage, the second-longest of the group, is also the most strenuous. Hikers entering this cave will have to use caution on slippery and jagged rocks and, although the cave is not an extremely tight squeeze, it will sometimes require getting on hands and knees. The initial descent from the entrance is the steepest and most difficult. Those carrying backpacks are wise to shed them. 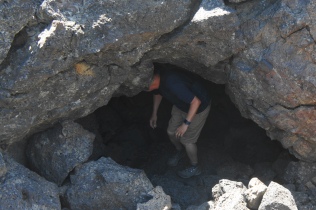 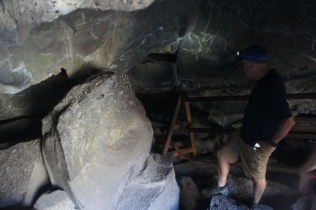 Ahead of the tricky traverse in Boy Scout Cave

The principal attraction of Boy Scout Cave is the frozen ice, visible year-round in the chilly lava tube. The first ice patches (in the summer) are found in the initial entry room, but thicker patches are visible the further one travels into the cave. Most will turn around after about 250 feet, where the lava tube thins to a shallow passage with very low ceilings. 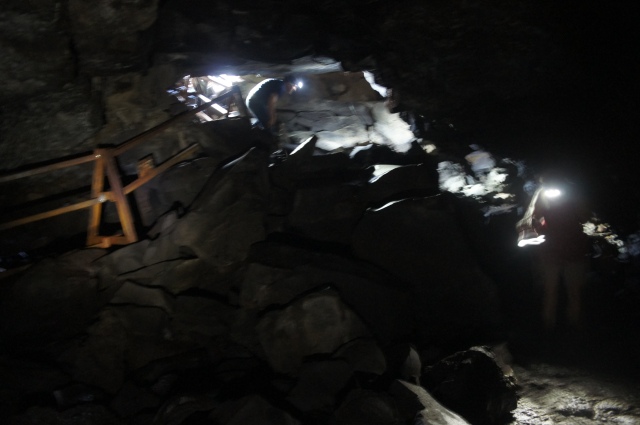 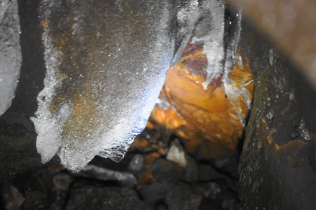 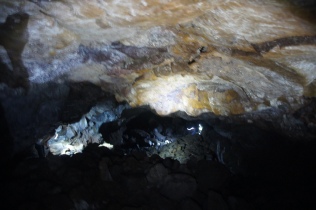 There are also alternative passages back near the entrance heading in the opposite direction, although these are even more strenuous than the main course.

Exiting the Boy Scout Cave the way you came in, climb back up to the main trail and continue in a northwesterly direction toward the final attraction of the hike: Beauty Cave. As the name suggests, Beauty has slightly more attractive features than the other caves, including modest lavacicles and dripping water. After an initial descent at the entrance, the rest of the cave—though short—is relatively easy to traverse. Again, there are other side passages to explore, although they end relatively quickly. 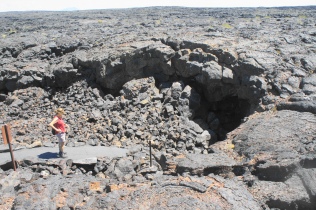 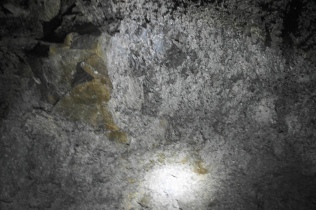 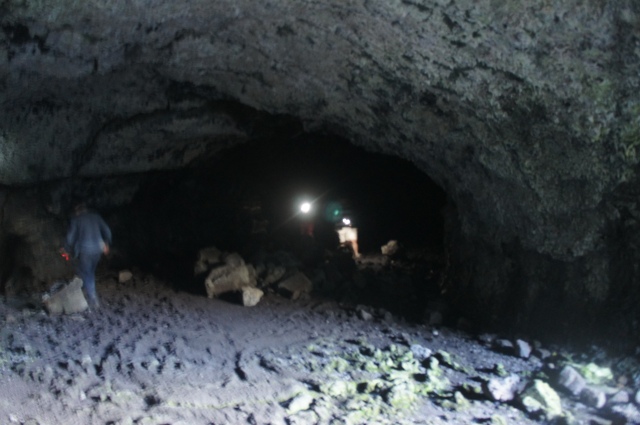 After visiting Beauty Cave, make your way back to the main trail junction at Dewdrop, then continue right, back to the parking area. All told, not including the caves, the trail distance clocks in between 1.5 and 1.6 miles. To be frank, the lava tubes, while offering a fun opportunity to try some spelunking, are not the nation’s finest: for more diverse and colorful lave tubes, try the collection of caves at Lava Beds National Monument in California.

To cap off a visit to Craters of the Moon, climb the short, 0.2-mile trail to the summit of Inferno Cone for panoramic views of the area.