If looking for an easy, yet high elevation, hike in Rocky Mountain National Park, the fairly level trail to Timberline Pass is a safe bet. Skirting the south side of Tombstone Ridge, the views of Forest Canyon, the Continental Divide, and Longs Peak from this route are spectacular. Though the western section of the Ute Trail, located up the road near Alpine Visitor Center and the subject of another post, is perhaps more interesting, the hike to Timberline Pass is quite unique and, of course, boasts stunning vistas in a section of the park that is otherwise short on trails. It is best to hike in the mornings—this would be maybe the worst possible place to be stuck in an afternoon thundershower.

The turnoff for Ute Crossing is not clearly marked from the road, but with a map and a reasonably astute navigator, it is not hard to spot. Coming from Estes Park, the trailhead can be found just as Trail Ridge Road crests the top of the ridge, on the left.

While the Ute Trail technically continues beyond Timberline Pass (6 miles and 3,000 vertical feet later, the route drops to Upper Beaver Meadows TH), most visitors stop there – making for a short, 2-hour hike. After flirting with the idea of doing the whole trip, my mother and I on a Tuesday morning in July decided perhaps it was best to leave it for another day.

Setting out from the trailhead, a gradual uphill introductory section offers splendid views of Forest Canyon, Hayden Gorge, and the Continental Divide to the right. Better yet, for the entire stretch of 1.9 miles to Timberline Pass, this quintessential RMNP staple virtually never disappears from view.

While the trail levels out, the rock formations to the left ascend higher and higher. Far above the timberline, what Tombstone Ridge lacks in tree coverage it makes up for with an abundance of rocks…and rocks and rocks and rocks.

Marmots spotted among the rocks!

In some places, one will notice large, precariously-placed boulders that appear on the verge of collapse. Of course, much of it is an illusion – and on another day, the high points of Tombstone Ridge (11,691’; 11,630’; 11,722’) would surely make for a fun bouldering experience. 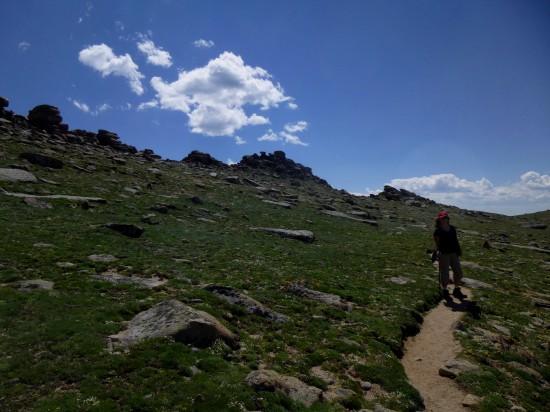 After about a mile of hiking, the landscape noticeably flattens out—resembling a narrow plateau between two steep valleys. (The tundra is still littered with granite, though, and the trail reflects this all the way to Timberline Pass.) From here, it is possible to sneak a peek at Old Fall River Valley to the north.

Also emerging to the right, in full view, is Longs Peak (14,259’). Though it is set back at a distance, there is no mistaking it – the highest peak in the park that easily rises above the rest.

After a brief hiatus, the rocky ridge reappears again on the left as the trail gradually begins descending toward Timberline Pass.

Even a half mile before the pass, the primary indicator that the destination is near—a 20-foot rock outcropping that abruptly sticks out like a sore thumb—is within view. 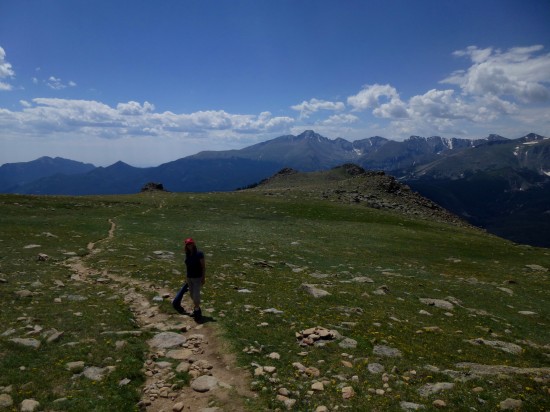 Less than 1/2 mile from Timberline Pass

Approaching the outcropping through a field of small wildflowers (and of course, rocks), the terrain ahead appears to suddenly drop off into oblivion. This horizon line, of course, marks Timberline Pass, and as you draw closer, the views below begin to fill in the details.

Those with a wild imagination for what might be over that line may be disappointed, but the views of tree-covered Windy Gulch below, and the forested foothills surrounding Estes Park beyond, easily provides hikers with their just desserts.

Stop here for photos, to take in the view, or to grab a snack. As mentioned before, an ambitious hiker destined for Upper Beaver Meadows TH might note that four more miles of steep descent await. Alternatively, trekkers yearning for an even better view of Longs Peak and the Fern Lake area (supposedly one can see Spruce Lake below) can veer off to the right and climb unnamed point 11,503’—from this angle simply a short knob indicating the farthest southern tip of Tombstone Ridge.

After a sufficient break, return following the same route from which you came – a rocky 1.9 miles back to Ute Crossing. For the round trip, allot at least 1 ½ to 2 hours. 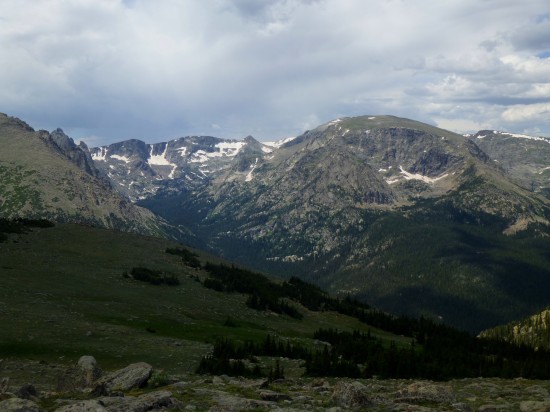 View of Hayden Gorge from across Forest Canyon

Extra credit: Check out another, higher-elevation section of the Ute Trail here.