The route into Bitter Spring Creek Canyon is one of those if-you-have-done-everything-else hikes, buried in an isolated corner of Capitol Reef National Park. Yet the geology-minded will be rewarded with up-close views of the eroding layers of Mancos shale, while biologists will discover small groves of cottonwoods and perhaps a few canyon-dwelling creatures. In the winter or spring, as the canyon falls within a designated grazing allotment, you’re likely to have company—herds of cows can be found commuting between water sources, including the creek itself and Little Lake Mead. This report describes a roughly 2.2-2.5-mile hike to the Capitol Reef NP boundary, though the left fork of Bitter Spring Creek can be followed for at least an additional mile.

*Note: There is NO maintained route along Bitter Spring Creek. It is a “choose-your-own-adventure” hike with multiple options into and out of the canyon and around Little Lake Mead: there are a handful of cattle trails to follow, or, alternatively, it is possible to follow the main wash (likely to be mostly dry depending on the time of year) up canyon.*

The approach to Bitter Spring Creek Canyon (not to be confused with its southern neighbor, Bitter Creek Canyon) begins along the Notom-Bullfrog Road in Capitol Reef’s Waterpocket District, roughly 29 miles south from the turn-off on Highway 24. Hikers would be able to reach the canyon from any number of pull-offs if it were not for a 20-foot hogback ridge of Dakota sandstone hugging the road’s eastern flank. Yet at about the 29-mile mark (just before entering the alien-like, red and purple slopes of the Morrison formation; if you start to feel like you are on Mars, you’ve likely gone too far south), there is a break in the ridge. This is the “trailhead.” (There is not likely to be a well-worn route from the road to the base of the ridge, but there is a distinct cattle trail that winds through the break.) 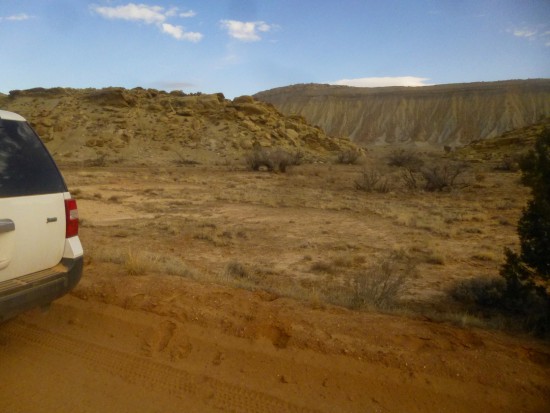 From the window through the hogback, a brushy flat unfolds below, revealing a muddy pond known rather amusingly by locals as “Little Lake Mead,” fed by Halls Creek.

Skirting the southern edge of the “lake” (when I was there, it was simply a collection of mud and brush, with a tiny pool of standing water maybe 20 feet wide), there is an old metal register revealing the pond’s true name: Bitter Creek Reservoir, constructed 1945. As this is one of only a handful of watering holes in the area, you are likely to encounter a herd of cattle grazing around the lake in the winter. On the day my colleague Sandy and I explored this route, the bovine creatures eyed us with suspicion: it’s not too often they see humans around these parts.

From Little Lake Mead, route options across the Grand Gulch abound. Keeping an eye on the goal (the obvious canyon to the north), you can either try your luck following a cattle trail that cuts through and around a number of cut banks or strike out on your own in a general northeastwardly direction. Keep in mind that, in addition to a number of tributary washes, there are two main drainages (see map above): it is the second (easternmost) wash that should serve as your North Star. 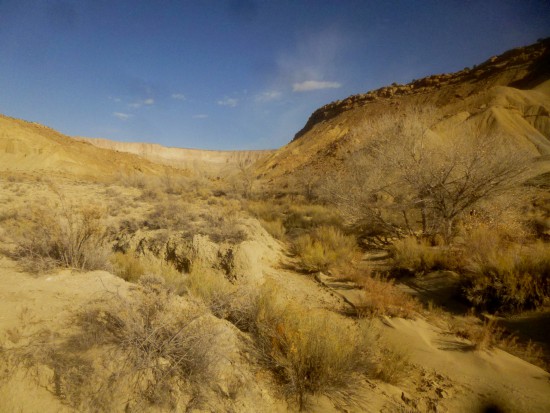 Above this arroyo on the left flank, a sandy, reasonably well-worn cattle trail offers the most direct route into the canyon. A second option is to walk up Bitter Spring Creek (mostly dry), avoiding the cut banks but running through a smattering of obstacles in the form of thick vegetation. To see both wide desert vistas and riparian habitats, I recommend doing one on the way in and the other on the way back, forming a lasso-loop of sorts (see map).

Initially, the terrain around Bitter Spring Creek appears extremely dry and unsupportive of life beyond the ubiquitous sagebrush and occasional cactus. But a drop into the primary drainage reveals groves of willows and even cottonwood trees (though some, unfortunately, are not in great health). At a point where the canyon begins to narrow, we found water (likely emanating from the creek’s namesake spring). This supports not only the cows, but a wide array of wildlife: we encountered a family of chukar partridges and a hairy woodpecker immediately upon discovering the stream. 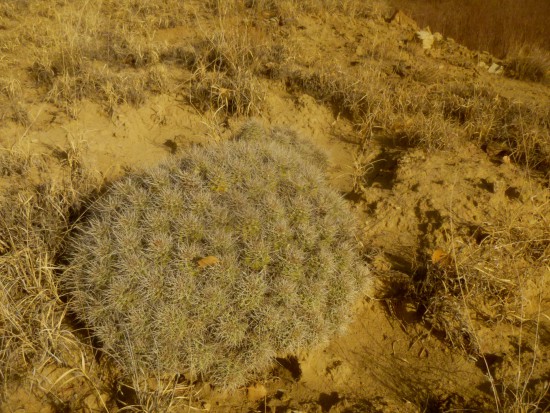 If up above the creek on the west bank cattle trail, you will eventually encounter a gate through a barbed wire fence around 2 miles into the hike (the fence between the trail and the creek was mangled and in bad shape). If down in the wash, start finding a route up to the west bank to avoid a particularly dense thicket of willows parallel to the gate. Strangely, one side of the fence post reads “US Boundary NPS”—even though the actual, current park boundary is another 1/4-1/3 mile farther.

Beyond the faux boundary fence, a faint trail leading up a small ridge appears on the opposite side of the creek. Unfortunately, reaching it requires pushing through the crowded grove of willows, but from this direction, there are a couple suitable paths. Once on the other side, the scenery gets noticeably more intriguing, as you can now clearly see a new layer of the Mancos shale: the colorful Emery member. This rock formation is responsible for the golden-orange cliffs above to the right. Straight ahead, the massive hunk known as Tarantula Mesa (6,300’) shines in the early afternoon sun.

There are again a number of route options from here, corresponding with three drainages (two were dry when we hiked in December). The furthest east—a dry wash—leads 1/5 mile to an obvious wooden fence: the true park boundary. The middle option follows the water (here it is flowing rather well, up to 6 or 8 inches deep in some places) through a brushy wash, also leading to the park boundary in about 3/10 mile. 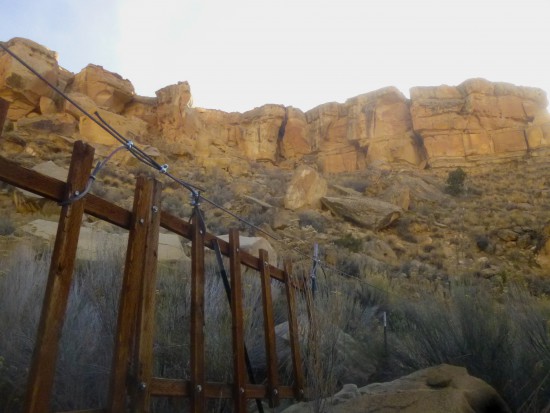 Eastern boundary of Capitol Reef National Park, with the shale cliffs of Swap Mesa beyond

On a topographical map, you will notice that the west, or left, fork of Bitter Spring Creek turns sharply before cutting northwest into Swap Mesa. This is the third route option, and probably the highlight of the bunch. Awesome boulders can be seen strewn precariously along the sides of the chiseled canyon, seemingly one major earthquake from tumbling down to the bottom. Alas, on our December afternoon hike, we had to turn around after 1/4 mile—but hikers with more bandwidth can wander further up the dry creek bed. (I believe there is another fence at the source of the canyon, over 1-1 ½ miles up from the faux boundary fence.)

After exploring to your heart’s desire, return via either the cattle trails or the drainage. For variety’s sake, there is a slightly longer path around the north side of Little Lake Mead which affords interesting views of Ferron and Tununk shale ridges, miniature versions of the much larger Waterpocket Fold seen to the west. (We also discovered an old wire enclosure—protecting something unknown—likely built in the 1940s when the reservoir was dammed.) From here, make your way back to the break in the Dakota sandstone ridge (not hard to find from the lake) to reach Notom-Bullfrog Road.

On the way back, we come across a herd of cows again

Trailing the cows all the way back to Little Lake Mead, with the Waterpocket Fold in the distance

So there you have it: a “so-random-even-locals-have-barely-heard-of-it” hike where, if you’re lucky, you’ll get a chance to chase a herd of lazy cows from one water source to another.