After a failed attempt earlier this month when I unintentionally ended up at a higher, more distant point, I returned to the area two weeks later seeking out a rock feature known as “The Motorman” in western Capitol Reef National Park. Though sometimes hard to spot, the spire is visible—and best accessed—from a paved pull-out just up the hill from the Chimney Rock Trailhead. Why is it named “The Motorman”? As the story goes, the old highway between Torrey and Capitol Reef briefly followed the wash bottom, passing just below this fanciful tower, which resembles a hatted highway patrolman. Though there is no official trail, it is possible to follow a well-worn path to the base of the spire, making for a short, 20-30 minute jaunt.

If coming from the east—the heart of Capitol Reef National Park—on Highway 24, park at the first pull-out on the left beyond Chimney Rock Trailhead. Here there is an interpretive wayside here directing attention to a fault line across the road to the north, but your journey to the The Motorman will take you south. You can spot the destination from the road.

Begin by following a well-worn use trail down a reddish slope composed of rocks from the crumbly Moenkopi formation. After 100 yards, the path drops into a wash, bounded on one side by a 30-foot wall of Moenkopi and a throng of boulders. Stay to the right of these boulders, then follow a fainter trail up over a small crest. Here the trail veers left (perhaps connecting to Chimney Rock Trailhead or the Sulphur Creek route). Stay straight, with The Motorman in clear view ahead, over a bend in the curving, dry creek bed. Descend the slope into the wash again, the location of the old highway. 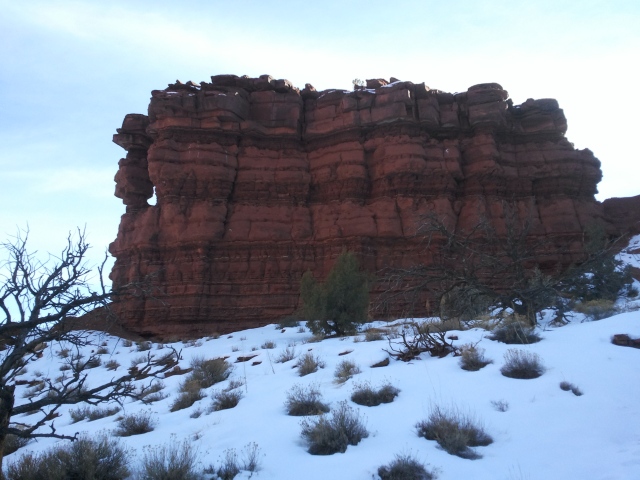 Crossing up the other bank is a bit more difficult, requiring a short scramble up a 6-foot ledge. Be careful—Moenkopi rock is noticeably fragile; be sure to pick a spot that feels very secure to climb up and over the barrier.

Beyond here, it is a short scramble up the hill to the base of The Motorman. It is possible to make a clockwise loop around the spire and up and over a small pass between two higher walls, affording nice views of Chimney Rock to the west. After navigating down the steep slope back to the wash, return the way you came.

Opposite side of The Motorman spire