The remote Trachyte Creek drainage system—just east of Utah’s Henry Mountains and north of Lake Powell—comprises a flurry of narrow canyons, many thin enough to form slender slots. One of the area’s best day hikes is Lower Maidenwater Canyon, easily accessible from Utah Highway 276 to Bullfrog Marina. The road roughly bisects the canyon into two sections: three challenging upper forks to the west (requiring technical canyoneering gear) and a more manageable, non-technical lower gorge. Though it rarely thins to a tight slot, Lower Maidenwater boasts a half-mile stretch of beautiful, curving narrows. Hikers may combine Maidenwater with nearby Trail Canyon to complete a roughly 7-mile loop, though the first 1.5 miles of Lower Maidenwater (before a deep pool with a sketchy bypass) are the highlight. 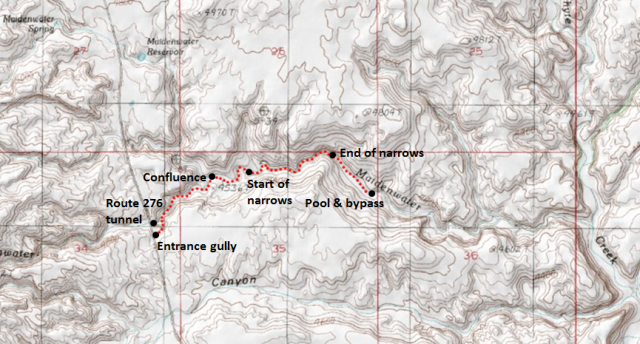 Map of Lower Maidenwater Canyon and the Trachyte Creek area; adapted from: http://www.mytopo.com/maps/

The Trachyte Creek area—often overlooked due to its location mostly outside the boundaries of neighboring national park units—is nevertheless relatively easy to reach by passenger car. Paved Highway 276 crosses the middle and southern forks of Maidenwater Canyon in quick succession, roughly 9-9.5 miles south of the 276 junction with Highway 95. The south fork provides the easiest access to Lower Maidenwater Canyon. Park at one of the two small pull-offs on the east side of the road. The southernmost parking area is ideal.

From here, proceed down a more gradual, boulder-choked ravine to the canyon floor. This access point is considerably easier and less exposed than the rocky, man-made talus slope just east of the cattle guard 50 yards north (astride the northern parking pull-off). 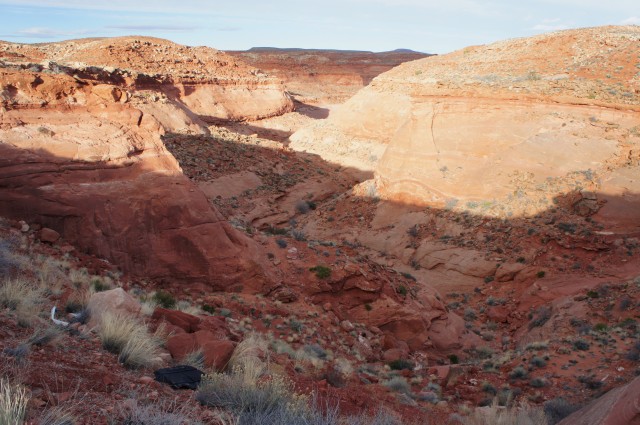 You have to hand it to the road architects, who utilized some creative tactics to build across the deep canyon. Instead of constructing a bridge, engineers filled in a strip of the canyon with rubble, creating a high embankment that supports the passage of the road. Water trickles through a large tunnel drilled into the sandstone bedrock—visible to the left from the bottom of the ravine route. (The tunnel is extremely dark; bring a flashlight if you plan to explore.)

Leaving the road behind, continue down-canyon. In contrast with its bleached white appearance in surrounding areas, the smooth-sloping Navajo sandstone in Maidenwater Canyon exudes a reddish-pink color more often associated with the Wingate sandstone.

The distance between slickrock slopes lessens as the dry wash quickly begins to wind through a narrow—but not particularly deep—section. About ¼ mile from the hike’s start, a 10-foot pouroff is easily bypassed by way of the bench on the left. A couple minutes later, hikers will reach a confluence, where a significant drainage enters on the left—this marks the entry of the middle and northern forks of Maidenwater Canyon. Continue east, downstream.

Perhaps 2/10 mile beyond the confluence, the canyon floor drops precipitously by about 25 feet into a shady chasm of pink sandstone. A faint use trail on the left leads to the easiest route down. The switchbacking route benefits from the presence of serrated bumps that helps with traction on the sloping slickrock; however, the bypass feels rather exposed for a short period.

25-foot dryfall in Lower Maidenwater Canyon, bypassed via a trail on the left

The canyon below continues to be narrow, though the walls remain only 10-15 feet high before reaching a mostly flat shelf.

Five minutes from the bypass, the canyon deepens and the sandy wash is temporarily replaced by cross-bedded slickrock. A vertical wall, stained with black streaks known as desert varnish, ushers in the half-mile long narrows. 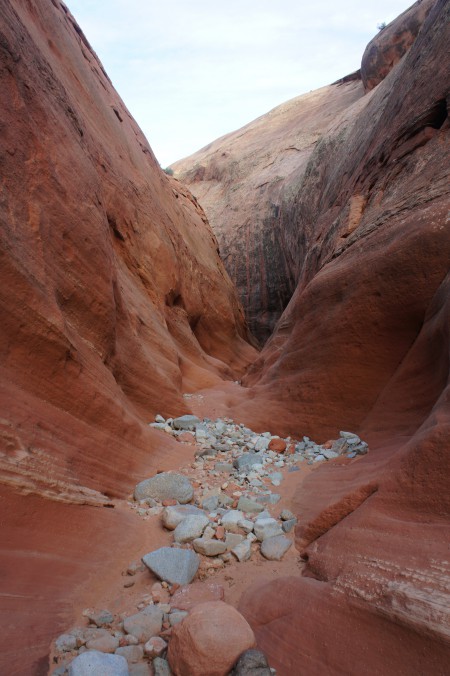 Maidenwater Canyon begins to narrow, just before an impressive display of desert varnish

As of February 2015, the narrows contained only four notable obstacles—minor chockstones and short pouroffs—all of which are easily descended. The best narrows—a flat, curvy section about midway through the half-mile stretch—appear smooth, winding, and colorful, not a far cry from the streaked walls of Antelope Canyon, the far more famous slot outside Page, Arizona.

At about the 1 ¼ mile mark, the canyon widens to about 30 feet across, and the sudden appearance of tall cottonwood trees usher in the end of the narrows section. Tall grasses line the wash bottom, and a spring-fed stream appears. The gorge briefly chokes up again just before a nasty pool, which appeared at least 3 feet deep when I visited in February 2015 (this was after a significant dry spell; after winter snow or flash floods, the water levels are likely to be higher). 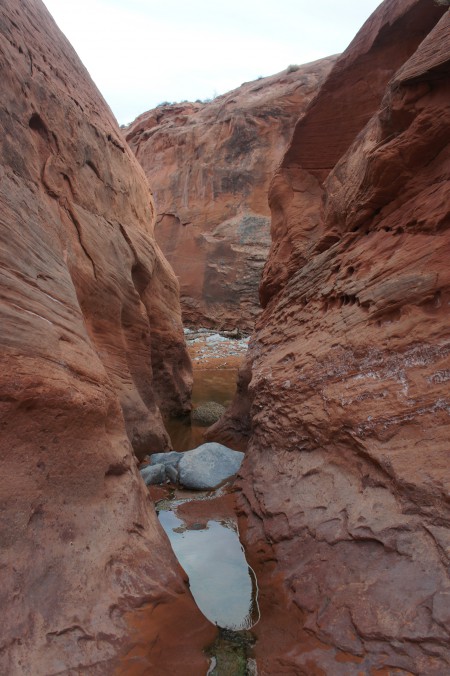 Passage drops through this notch into a deep, nasty pool. This is a good turnaround point for day hikers.

Determined hikers can continue on, either by braving the chilly pool or ascending a sketchy bypass up and over the slickrock slope on the left. From here, it is less than 1 ½ miles to the junction with Trachyte Creek; many hikers will camp near here and/or return to the highway by way of Trail Canyon, the next west-side drainage to the south. The latter forms an approximately seven-mile loop.

For those not willing to climb or get wet, the pool is an ideal turnaround point—retrace your steps back through the beautiful narrows and up the rock-strewn entrance gully to Route 276. Allot at least two hours for the round trip. 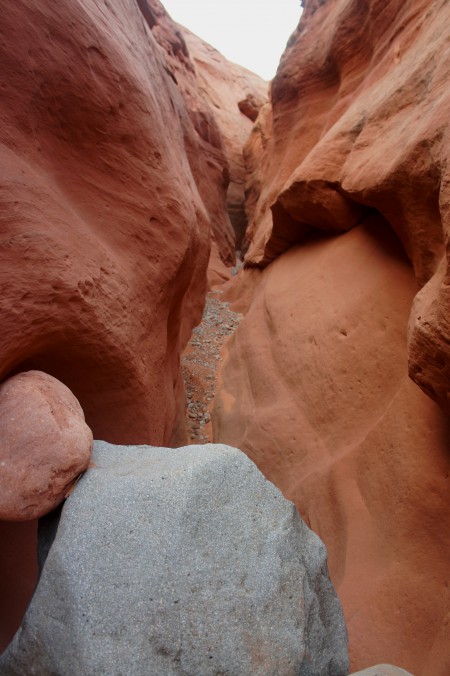 Looking back at the Maidenwater Canyon narrows