Capitol Reef National Park’s Fremont River Trail, named for the perennial stream it follows, ends atop a windswept hill providing sweeping views of the Waterpocket Fold, a 100-mile long wrinkle in the Earth’s crust accented by a panoply of colors. The first third of the hike traverses a trail that is wide, flat, and accessible to wheelchairs, leashed pets, and bicycles. Beyond a passable wooden fence, the trail is open to hikers only. A persistent climb of 0.7 mile leads to two tremendous viewpoints—one down to the Fremont River Gorge as it cuts through pine- and juniper-studded Miners Mountain and one east to the magnificent Waterpocket Fold.

Officially, the Fremont River Trail begins at Loop B of the Fruita Campground. However, non-campers can access the path by turning off Capitol Reef’s Scenic Drive at the next right-hand turn beyond the campground, following signs for the amphitheater. Park at the end of the drive and connect with the trail (easy to spot) heading north; starting from the amphitheater shaves off roughly 0.2 mile round trip. (Alternatively, park at the Gifford Homestead, one mile down the Scenic Drive on the right. Walking along the riverside path between here and the campground adds 0.4 mile round trip.) 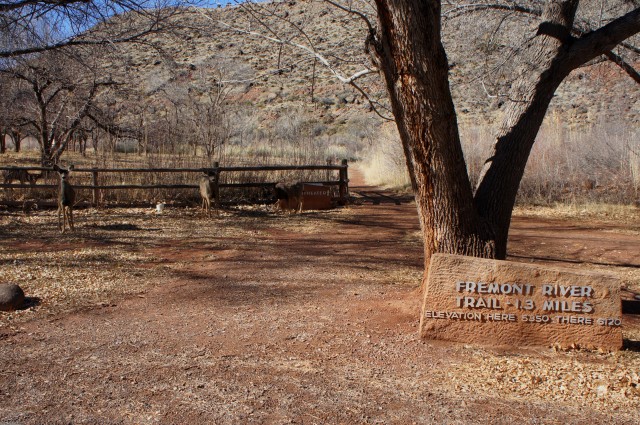 The walk begins in the heart of historic Fruita, once a tiny, picturesque town founded by Mormon pioneers in the 1880s. While Fruita’s population never grew larger than ten families at any given time, it became well-renowned for its fruit orchards. Apples, apricots, cherries, peaches, pears, and plums from the gardens of Fruita were sold as far as Elko, Nevada and Denver, Colorado. Upholding the tradition, the National Park Service staff at Capitol Reef maintains nearly 3,000 fruit trees today, inviting visitors to pick (and eat) as they please when the crop is ripe.

The Fremont River was—and remains—central to the orchards’ survival. Fruita residents developed a series of irrigation ditches to divert water from the river (and nearby Sulphur Creek). A number of these ditches are visible along the early stretches of the hike.

Within steps of Loop B heading west, the Fremont River Trail—wide and well-packed with dirt and gravel—passes Chesnut Orchard (yes, that’s spelled correctly), bearing mostly pear trees, on the left. To the right is the brushy river, fringed by tall grasses, green-stemmed rabbitbrush, Coyote willows, and lofty cottonwood trees (many cottonwoods are nearly as old as Fruita itself).

A couple minutes’ walk reveals the back of the amphitheater on your left. At this point, visitors are greeted by a wayside exhibit previewing the hike ahead, as well as a small box containing trail brochures (available for 50 cents). From here, the trail passes the Mulford Orchard (mostly peaches) to the left and crosses at least two irrigation ditches—one thin and small, one significant wider and deeper. Three large cottonwoods on the right offer pleasant shade on a hot summer day.

From here it is a short walk amid thick willows and sagebrush varieties to a wooden fence, the point at which bicyclists and pet walkers must turn around. The trail continues through a hiker-width slit in the barrier. 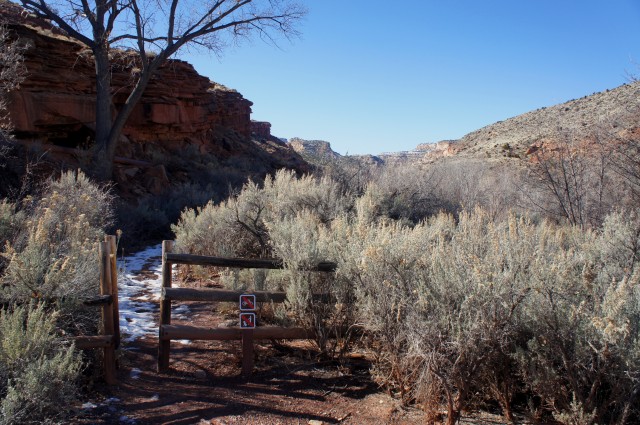 Fence – hikers only beyond this point

It is approximately 100 yards to a point where the footpath begins gradually ascending the left flank of a rapidly-deepening canyon, here composed of rock from the Triassic Moenkopi formation. The climb is not overly steep, but it is a persistent slog.

Down to the right, the river has cut a rugged canyon into the golden Sinbad limestone layer of the Moenkopi. Farther upstream, older rock strata from the Permian period—Kaibab Limestone and White Rim Sandstone—are visible, forming the bottom layers of Fremont Gorge. Across the canyon, Johnson Mesa—an example of what’s known as a strath terrace—used to form part of the valley floor, before additional down-cutting of the Fremont River and Sulphur Creek completed the landscape of today. (For a great hike across Johnson Mesa, check out the nearby Fremont Gorge Overlook Trail.)

About ½ mile from the wooden fence, the trail bends to the left, skirting the rim of a side canyon. This point offers the hike’s best views of Fremont Gorge as it snakes southwest. 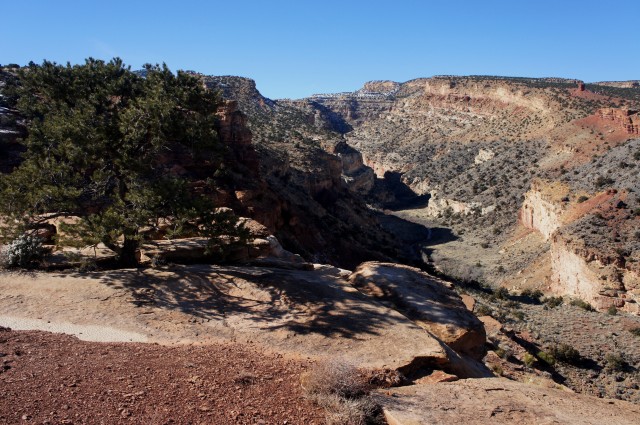 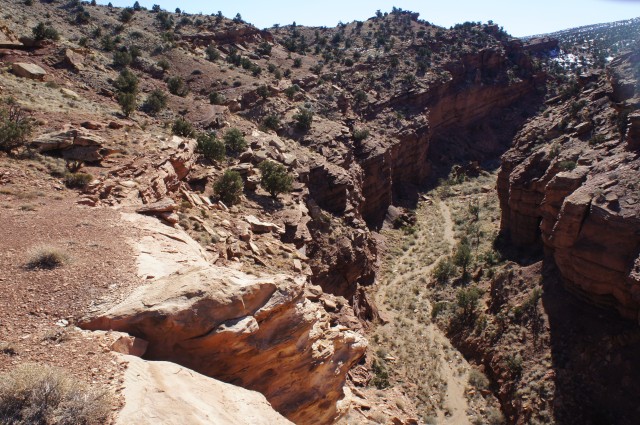 Side canyon – trail veers off to the left

The side canyon is also impressive, but the trail does not remain beside it for long. A well-trodden trail climbs steeply to a high point on the left, but the official path continues southeast to the base of the next good-sized ridge. After zig-zagging up the west-facing slope, the trail ends at a large, hiker-made cairn. Views of the Waterpocket Fold from this spot are virtually unobstructed—beginning with the red-orange Wingate sandstone cliffs to the northeast, topped by cream-colored peaks in the Navajo sandstone. Straight ahead to the east is a continuation of the Wingate cliffs, though the vertical walls here quickly give way to boulder-strewn talus slopes—and then two horizontal strips of green-gray and deep red badlands (Chinle Formation and Moenkopi Formation, respectively). Back to the west, the dip slope of Miners Mountain (~7,900’) gradually rises to the fill the horizon, but rocky canyons add gradations to the landscape. 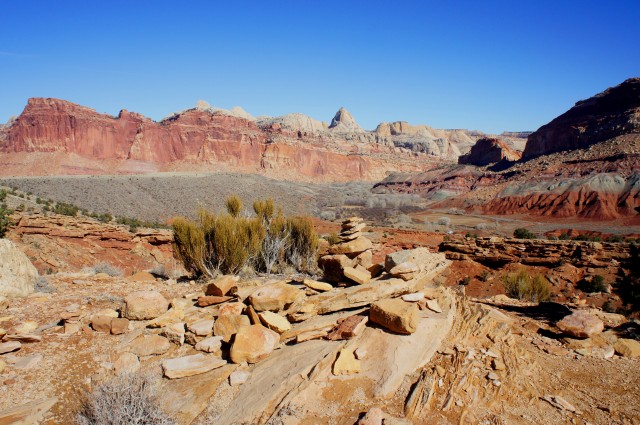 View from the top – and end of the trail

A little exploring—to the next ridgetop to the south—provides a better view of the Fold to the southeast, where cone-shaped Fern’s Nipple (7,065’) sits atop a wall of Wingate.

Panorama view (east) from the end of the Fremont River Trail

After soaking up the stunning vistas, return the way you came. The Fremont River Trail drops roughly 500 feet over the course of 0.7 mile. It is another 1/3 mile back to the amphitheater and an additional 150 yards to Loop B of the Fruita Campground.

View from some off-trail exploring 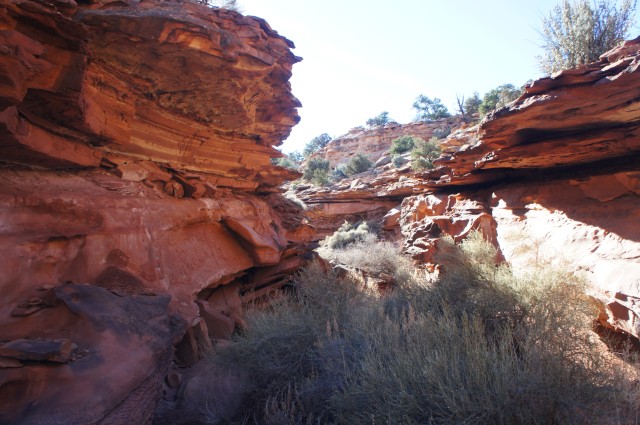 Exploring a different drainage in the area 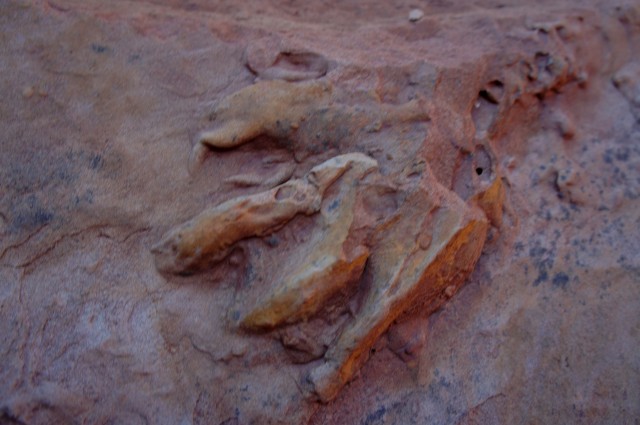 This is what you think it is – sort of…