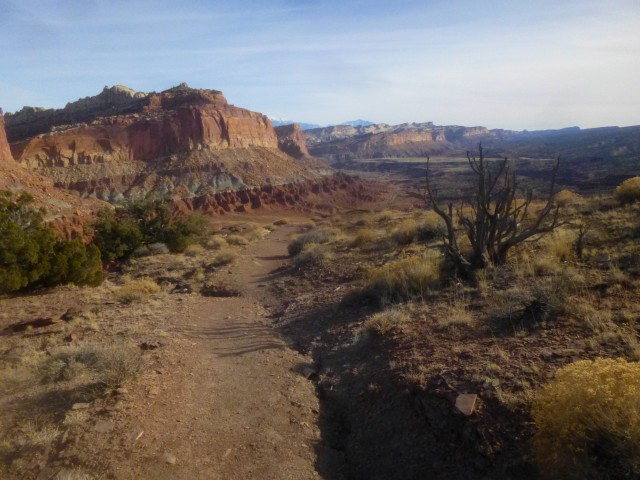 Three miles east of Capitol Reef National Park’s western boundary, the Chimney Rock Trail is the first of the park’s hikes reached by east-bound travelers on Utah’s Highway 24. While the highlight of the 3.6-mile stem-and-loop is the rock itself, a lengthy stretch atop 500-foot-high Mummy Cliff affords excellent views of much, much more. On clear days, the vistas stretch as far as flat-topped Boulder Mountain and Thousand Lake Mountain to the south and west, as well as the coned peaks of the Henry Mountains to the east. In between, the landscape is illuminated by the red-, orange-, gray-, and tan-striped western face of the Waterpocket Fold, Capitol Reef’s defining geological feature.

The Chimney Rock Trailhead is situated almost exactly halfway—3.1 miles in either direction—between the Capitol Reef Visitor Center and the western boundary on Highway 24. There is a small pit toilet at the parking area.

The trail begins as a wide, well-defined path, lined by neatly-placed rocks on either side. The first ¼ mile involves a mostly flat and simple stroll through gently-sloping hills composed of rocks from the crumbly Moenkopi Formation, a sedimentary layer deposited during the Triassic Period (208-245 million years ago). It is fun to imagine these red and pink mounds capped, perhaps not too long ago, with prominent spires that have, over time, eroded away. In fact, the mostly Moenkopi tower known as Chimney Rock owes its survival to a harder cap of tan-colored rock known as the Shinarump Member of the Chinle Formation.

The trail passes alongside a good-sized chunk of Shinarump just before starting up a handful of steep switchbacks. Here Chimney Rock temporarily disappears from view, but a look back west reveals a seemingly endless line of vertical cliffs—these belong principally to a newer rock layer (mid-Jurassic) known as the Wingate sandstone.

About 4/10 mile from the trailhead, a short spur on the left leads to a viewpoint down into a landscape of green-gray badlands. These hillsides are made of clay from the Monitor Butte Member of the Chinle Formation. The lack of reds and oranges is a direct result of the depositional environment of the late Triassic, when this area was covered in bogs and swamps: anaerobic (i.e. oxygen shortage) conditions stunted the oxidization of iron required to give the bedrock a rosy color like the Wingate. 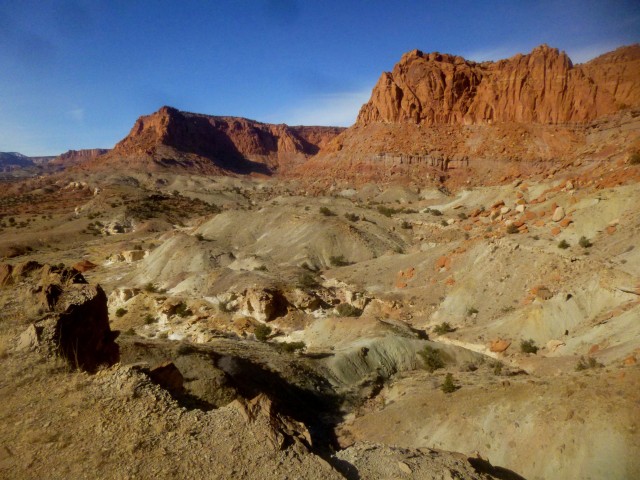 From here, it is a short climb to a trail fork signifying the start of the loop portion of the hike. Bear left if heading for Chimney Rock Canyon and Spring Canyon beyond—but most hikers seeking to complete the loop will want to head right: hiking counterclockwise lessens the amount of time spent slogging uphill. 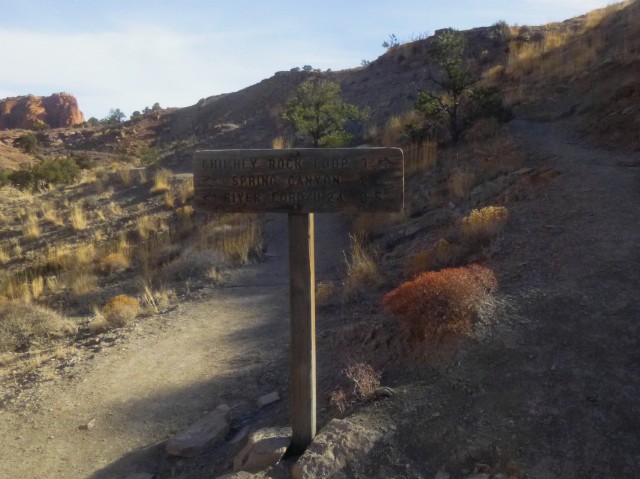 Within 2/10 mile, an overlook to the right provides excellent views of Chimney Rock to the south, as well as Meeks Mesa and the Fluted Cliffs to the north. (It may be better to complete this hike in the late afternoon, as Chimney Rock is for much of the day under a long shadow that interferes with ideal photography.)

Beyond this point, the trail crests up and over three minor ridges. A break in the Wingate cliffs to the northeast—the head of Chimney Rock Canyon—appears after topping the second. At the third ridge, a 100-foot spur route leads out to the hike’s closest view of Chimney Rock. It is possible to descend to a lower shelf for an even more personal look at the impressive spire—but it involves a steep descent down a powdery slope. (Note: Be extremely careful near the edge of the 500-foot cliff—many of the rocks in this area are quite crumbly and hazardous.) 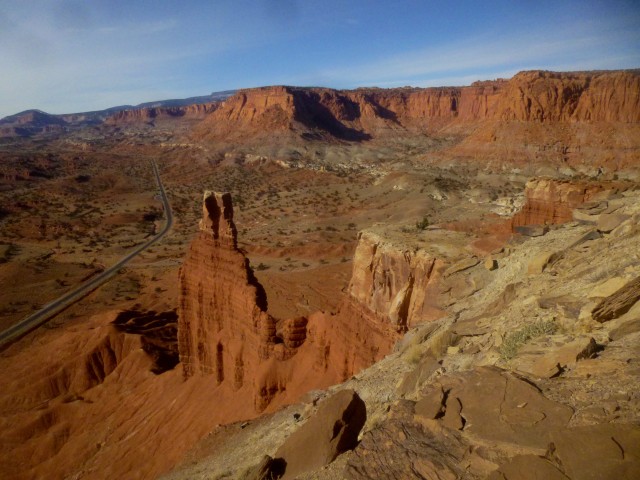 Chimney Rock from the trail

Back on the main trail, a couple more switchbacks and a long straightaway bring hikers to the top of Mummy Cliff. The highest point on the hike (6,608’) is reached within a couple minutes. Here you are looking down to the south at Panorama Point, with the dirt track out to the Goosenecks just beyond. Sulphur Creek Canyon (mostly invisible due to its deep and relatively narrow cut), Miners Mountain (~7,900’), and Boulder Mountain (11,317’) complete the southern horizon.

Hike a few minutes beyond the highpoint for the best views to the east. The closest prominent landmarks are Navajo Knobs (6,979’) (see here for the hike to this feature) and The Castle (6,387’). Beyond, the Waterpocket Fold bends southward, revealing four sedimentary rock layers—each a different blend of colors: Moenkopi, Chinle, Wingate, and Navajo. The most striking sight of all may be the Henry Mountains (11,522’), which from October through May are often capped with glistening snow.

View east of the Waterpocket Fold and Henry Mountains

After roughly 1/3 mile atop the relatively flat, pinyon/juniper-laden summit, the trail drops down to a pass two hillsides, then skirts the northern flank of a green-gray slope. Switchbacks shortly thereafter offer tremendous views of Navajo Knobs and the multicolor Whiskey Flat below.

Here the trail heads northeast as it winds down the grassy slope (Mormon tea plants here are ubiquitous), followed by a brief climb to the base of large Wingate boulder. The route then descends gradually to the entrance of Chimney Rock Canyon, a broad and enticing gorge that connects with much longer Spring Canyon—a popular backpacking destination.

Still slightly above the canyon floor, the trail reaches a second junction—turning right takes you down to Chimney Rock Canyon; a left turn heads back toward the trailhead.

The remaining 0.9 mile of the loop is rather uneventful, but the ascent to a small pass where the loop began is relatively gradual. The footpath weaves in and out of a dry wash, eventually settling for the left-hand side as it climbs to the original trail fork. From the junction, it is 0.5 mile—all downhill—back to the trailhead.

Allot 2-3 hours for the loop journey.