While the fort itself steals the show, Georgia’s Fort Pulaski National Monument also contains a handful of hiking trails. Among the easiest (and mostly wheelchair-accessible) is the North Pier Trail, a 6/10-mile stem-and-loop which begins and ends at the northwest corner of the park’s main parking area on Cockspur Island. Highlights include a late 19th century naval battery and a palm-studded view of the Savannah River as it drains into the Atlantic. Perhaps most interesting about the hike, however, is the dense vegetation: a mixed forest of pines, hardwoods, and palms. (Note: As of early 2017, part of this trail was closed due to damage sustained by Hurricane Matthew, which ravaged the area in October 2016.) 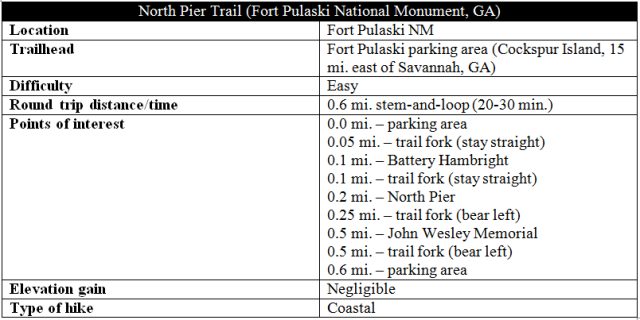 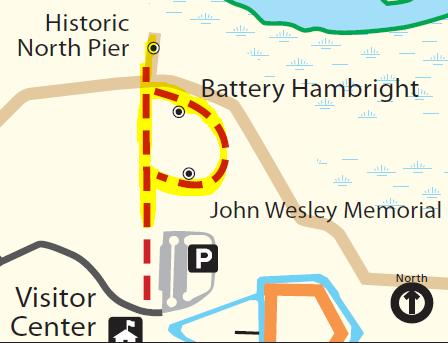 After visiting the fort, return to the parking area and look for a large sign marking the start of the North Pier Trail, at the northwest end of the lot. Here, just beyond the trail panel, a wide and paved path plunges into the coastal forest, revealing wily branches, dense thicket, and flashes of palms. It’s flat and straight for the first 100 yards, after which the trail forks. Stay left to head toward the North Pier viewpoint.

Start of the North Pier Trail

As the trail snakes around a minor curve, it briefly emerges from the vegetation at Battery Hambright, a concrete structure constructed in 1901 (well after the original Fort Pulaski). The battery was part of a series of fort improvements completed after the Spanish-American War, though artillery was never installed at the site.

Skirting the battery to the left, the path continues north and splits again at around 0.13 mile. Head straight, with the pier now in sight. Scampering down to the sandy viewpoint, look off to the right: this is the mouth of the 300-mile Savannah River, a key avenue for blockade runners during the Civil War until the Union capture of Fort Pulaski in April 1862.

View downstream from the pier

Across the river is Jones Island—the southernmost tip of South Carolina—which was described by occupying Union forces during the war as “semi-fluid mud, which is agitated like jelly by the falling of even small bodies on it.” Downstream, one can also see the northern tip of Tybee Island, the primary staging point for Federal artillery during the siege of Fort Pulaski in April 1862. (Note: In its heyday, North Pier was a bustling port and key logistics hub for Fort Pulaski. Today, the granite block foundation and a handful of wooden pilings are all that remains.)

Looking up the Savannah River at North Pier

Once finished at the pier, double back to the second trail junction and bear left on a paved side route, which arcs around the grassy backside of Battery Hambright. This trail, which quickly reenters the thicket, leads to the John Wesley Memorial, a tribute to the founder of the Methodist Church who landed on Cockspur Island from Britain in 1736.

The side circuit ends about 70 yards past the memorial, back at the first trail junction. Bear left, retracing your steps on the initial straightaway back to the parking area. (Note: The official Fort Pulaski Trail Guide records the North Pier Trail as being one mile round-trip. However, this includes the distance to/from the Visitor Center, past the parking lot, to the trailhead. The actual stem-and-loop walk is roughly 6/10 mile.)