The Stone Bridge at Virginia’s Manassas National Battlefield Park was the site of the first action of the First Battle of Manassas on July 21, 1861. Destroyed during the war, the bridge has been reconstructed, just off today’s Warrenton Turnpike (Lee Highway), and marks the start of a short circuit hike on the west side of Bull Run Creek. The closest Manassas hike to Washington, DC—and one of the most scenic—the Stone Bridge Loop Trail is quite popular, especially on weekends. (Note: The loop is one of five hiking trails that trace the First Battle of Manassas; see also the First Manassas Trail, Sudley Loop Trail, Matthews Hill Loop Trail, and Henry Hill Loop Trail.)

In the early morning hours of June 21, 1861, Union Brig. Gen. Daniel Tyler marched his division westward on Warrenton Turnpike to the Stone Bridge, where his forces kicked off the First Battle of Manassas with a volley of fire against Confederate Col. Nathan “Shanks” Evans’ brigade on the western bank. But this was not the Federals’ main line of attack; in fact, Tyler’s artillery fire was simply a demonstration—a show of force intended to deceive and distract the Confederates from a much larger movement of around 13,000 troops farther north at Sudley Ford.

Though surviving the First Battle of Manassas, the Stone Bridge was destroyed by Confederate forces in March 1862 to obstruct the passage of Federal troops over Bull Run. The bridge was reconstructed, however, in 1884, situated partway upstream from Warrenton Turnpike, now a busy throughway.

The Stone Bridge Loop Trail begins and ends at the Stone Bridge parking area off Warrenton Turnpike, just beyond the popular Winery at Bull Run. From the parking area, a paved path winds downhill to the bridge, crossing it after around 175 yards. The bridge over Bull Run is quite wide, making it an attractive transit point during the early stage of the Civil War. 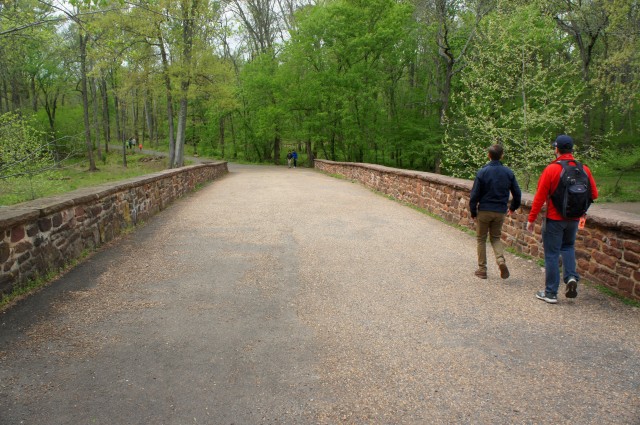 Once across, take a right at the trail fork. From here, you can get a side view of the double-arched bridge. The dirt path follows Bull Run’s western bank for the next half-mile. 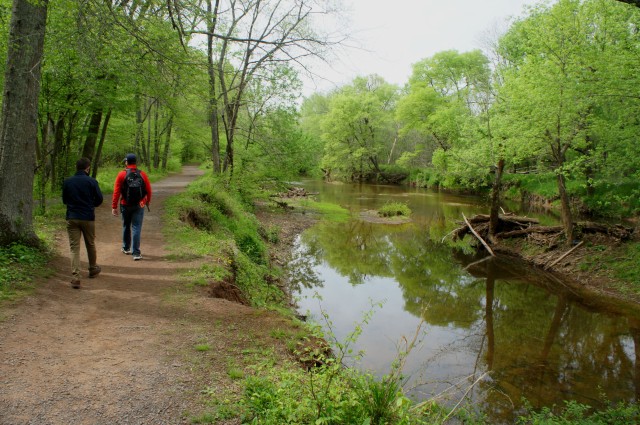 At the hike’s half-mile mark, hikers have a choice: bear right to climb to Farm Ford, or take an easier shortcut to the left. Those with sufficient energy should head for the ford, where, on the morning of July 21, 1861, a young colonel named William Tecumseh Sherman would make his Civil War debut – crossing Bull Run en route to battle.

From Farm Ford, the trail leaves Bull Run behind and follows a pine-studded ravine to the west, emerging onto an open field at 0.75 miles. Take a left, skirting the edge of the woods, then stay right at the next junction. (Note: This is where the shortcut route reconnects with the main loop.) At 0.85 miles, the trail reaches the former site of the Van Pelt House.

The Van Pelt family, staunch Unionists in a Confederate state, found their house at the center of battle on July 21. Col. Evans’ Confederate forces deployed here to defend the Stone Bridge, and according to Federal accounts, the Union’s historic “First Shot” of the battle crashed into the Van Pelt House at around 6 am.

After taking fire from Tyler’s Union forces, Evans directed a portion of his men to meet the challenge. At about 7:30 am, however, Evans unmasked his enemy’s deception: a nearby signalman, Capt. E. Porter Alexander spotted a much larger Federal contingent—around 13,000 troops—crossing Bull Run two miles north at Sudley Ford. Alexander immediately relayed the message to Evans: “Look out for your left, you are turned.” Evans responded quickly, withdrawing 900 of his 1,100 men to meet the advancing Federals farther north, leaving only a small contingent to hold the Stone Bridge. (Note: Later in the day, Evans’ forces would be routed at Matthews Hill, and Tyler’s brigade would push across the Stone Bridge—early Union victories that would belie an afternoon defeat at nearby Henry Hill.)

Beyond the panel, the trail rounds a corner and descends steeply, losing around 60 feet in less than 75 yards. Paralleling Warrenton Turnpike on the right, the path then crosses a marshy flat, returning to the Stone Bridge at around the hike’s 1.5-mile mark. From here, it is a short walk back across the bridge and up a minor slope to the parking lot.

Allot around 1-1.5 hours for this short (and mostly easy) loop hike.

Four additional hikes traverse the terrain of the First Battle of Manassas, including: