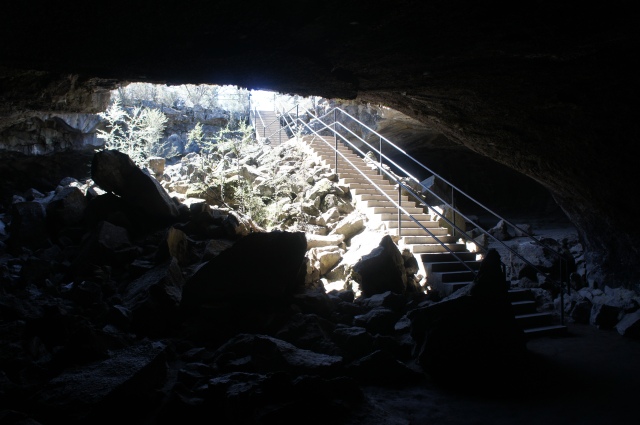 Northern California’s Subway Cave in Lassen National Forest is a relative newcomer to the area’s volcanic landscape; it formed less than 20,000 years ago as once-frequent lava flows drained away, leaving behind a wide, subterranean passage. Today it is a relatively popular stop on the way to or from nearby Lassen National Park, situated less than 15 miles to the southwest. Bring a flashlight (the lava tube is pitch black for much of the way) and a jacket, as the lava tube is a brisk 46 degrees year-round.

The parking area for Subway Cave is roughly one mile north of Old Station, California, along California Highway 89 (a.k.a. the Volcanic Legacy Scenic Byway). From the trailhead, the cave entrance is a short walk of less than 100 yards, though it requires scaling a set of metal stairs. At the first junction, bear left; the entrance will quickly appear on your right.

The cave entrance—as well as the exit—was the product of an ancient ceiling collapse during the tube’s cooling process. Dropping into the lave tube, large blocks of basalt—remnants of the collapsed roof—litter the landscape on the left and right. Once at the bottom of the stairs, flip on your light and head into the cool, damp cave. The passage is wide and easy to follow.

The first room in the cave is Stubtoe Hall, appropriately named for its jagged, uneven floor. The passage tightens as you enter the Wind Tunnel, where the darkness and cold chill begin to set in. Just off to the left, around 1/3 of the way through the cave, is a small room with low ceilings known as Lucifer’s Cul-de-Sac.

Heading through the Wind Tunnel section

Beyond the cul-de-sac, the main passage opens up into a broader room known as The Sanctum, which boasts 15-foot ceilings and two mini-volcanoes formed from gases and molten lava that once bubbled up from the cave floor. Lavacicle Lane, the next section, is the best place to spot tiny stalactites up above. Just beyond is a jumble of rocks formed from a partial collapse of the cave ceiling.

By now, the light is beginning to creep back into the cave, and a broad opening appears ahead. The Rattlesnake Collapse serves as the exit point (even though the tube continues beyond). Back out in the sun, bear right at the trail fork, following a dusty path through the low scrub back toward the trailhead. 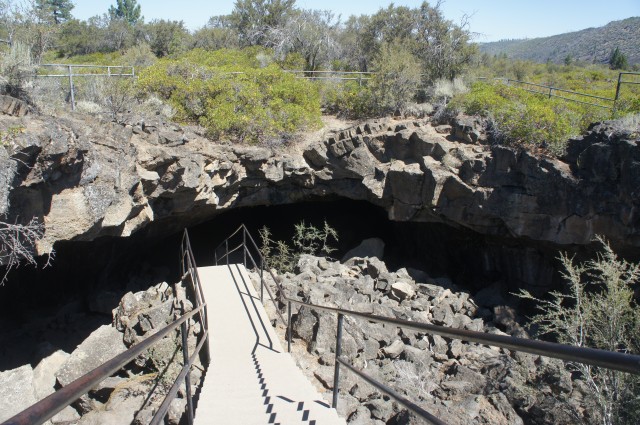 Exiting through the Rattlesnake Collapse

This path crosses a number of times over the lava tube below and follows a wall of basalt that juts out from the flat ground. Off to the left, the scrub gives way to a sea of pines, while partly barren Sugarloaf Peak (6,552’) peeks in and out of view to the west. Turn around and look south as well for partly-obstructed views of snow-capped Lassen Peak (10,457’) in the distance.

After arriving back at the cave entrance, bear left and continue the remaining 100 yards, down the stairs to the parking area. Allot 20-30 minutes for the round-trip hike.