Mount Falcon, rising to 7,841 feet above sea level, guards the eastern gateway to the Front Range outside Denver, Colorado. A short drive from the city, Mount Falcon Park is a popular destination for local residents, attractive hikers, mountain bikers, dog walkers, and horse riders to its grassy meadows and rocky outcrops. While the Mount Falcon East Trailhead in Morrison, Colorado is closest to Denver, the climb to the summit of Mount Falcon requires a grueling climb of more than 2,000 feet. Fortunately, an easier approach lies on the other side of the park at Mount Falcon West Trailhead. From here, it’s a little over a mile and a half to the summit and back, with relatively little elevation gain.

Reaching Mount Falcon West Trailhead requires driving up a series of winding (but paved) roads to the inner flanks of Mount Falcon. The closest town is the dispersed, slopeside community of Indian Hills, situated off U.S. Route 285. Even at the trailhead in Mount Falcon Park, you have already crested about 7,200 feet, making for a relatively level approach to the summit of Mount Falcon.

Sweeping vistas are already available from the parking area, especially from a small veranda and picnic area to the southwest. Here you can peer out over Parmalee Gulch, with additional foothills of the Front Range beyond.

View from the picnic area at Mount Falcon West Trailhead

The main route to the summit of Mount Falcon lies across the parking area to the northeast. Follow the wide path that marks the start of the Castle Trail, the principal thoroughfare into the heart of the park. Starting amid ponderosa pines, the trail descends slightly to pass picnic areas to the left and right, then reaches an information kiosk within around 100 yards. Here there is a large map of Mount Falcon Park and its set of interlocking trails. Just beyond, the path approaches a fence line, passing through it at the junction with the single-track Parmalee Trail. Stay straight on the broad dirt road.

By now the views have reappeared, with the route traversing an open ridgeline west of the summit. At ¼ mile, hikers reach the lowest point on the hike, effectively the neck between two higher knolls. From here the path climbs gradually and approaches a high, wispy meadow that unfolds on the left. Here the route splits, with the Castle Trail continuing left while the Meadow Trail heads off to the right into the woods again. Bear right on the Meadow Trail for the most direct access to Mount Falcon.

Meadow near the junction of the Castle Trail and Meadow Trail

At the next junction, roughly ½ mile from the trailhead, take a right on the Tower Trail, a moderately difficult track that leads eventually to the namesake lookout tower on the summit. Take another right at 6/10 mile to explore the Eagle Eye Shelter, which offers even better views than the lookout tower. This picnic shelter used to be a summer cabin owned by members of the local Kirchhof family from 1933-1972.

Eagle Eye Shelter and the view to the northwest

What a view the Kirchhofs enjoyed! The aperture extends from Mount Lindo and the Turkey Creek area to the south to the Mount Evans area to the north and west. 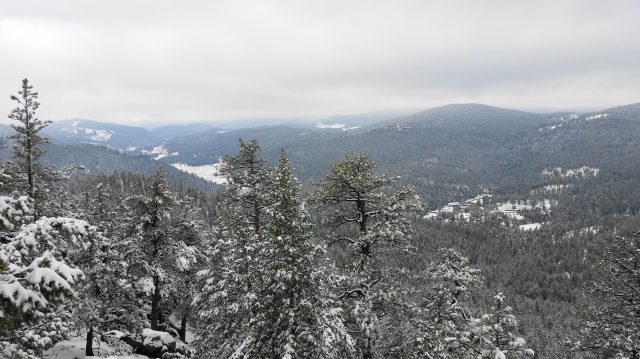 Returning back to the Tower Trail, bear right to continue east, gradually climbing uphill amid the rock outcrops toward the summit. The path divides again at 7/10 mile; bear right to begin the final stretch, a short loop that includes the summit. A couple steep and rocky sections require careful footing, but before you know it, the squat tower is within reach. At about 8/10 mile, climb the staircase into the covered tower.

Approaching the tower atop Mount Falcon

Additional views unfold from the summit, including a look to the north, although they are partly obscured by the tall pines that dot Mount Falcon’s slopes. Denver is visible on clear days to the east. 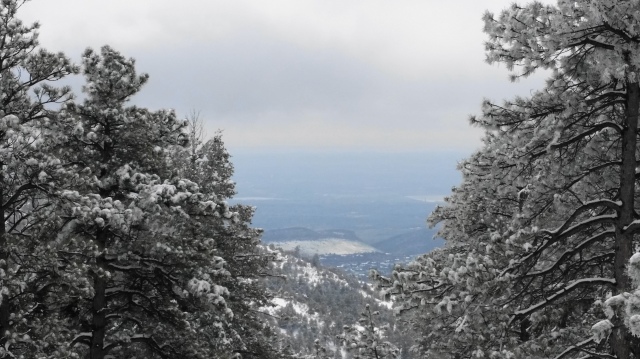 Once ready to move on, return to the foot of the tower and then follow the continuation of the Tower Trail as it descends the north slope of the peak. This section is relatively steep, punctuated by a sharp switchback, but very quickly returns to the junction reached at 7/10 mile. From here, return the way you came, back down to the meadow, ridgeline, and parking area. (Note: Visitors can also continue east on the Tower Trail to reach the east flank of the meadow, as well as the Old Ute Trail and the Summer White House area. See here for a hike description.)

A break in the clouds reveals more…snowy peaks

For just the 1.5 mile stem-and-loop, allot around 1-1.5 hours, building in time to take in the scenic vistas.