Dropping more than 1,000 feet into the lush Tye River Valley, Virginia’s Crabtree Falls is often claimed to be the highest waterfall east of the Mississippi. This is a deceptive title, as the falls is actually a series of cascades, dropping in fits and starts over the course of more than a mile. But the drawn-out nature of the falls is ultimately what makes Crabtree magical: just as hikers on the Crabtree Falls Trail have a sense of completion, there is another, larger drop just around the corner. While the first 1.7 miles of the hike are extremely popular, ambitious hikers can shed the crowds and continue on, past the falls, to the high, sweeping vistas of The Priest, one of the highest peaks in the region. The below description captures the blow-by-blow of the hike but is no substitute for actually being there, where the roar and spray of the falls—as well as the valley views from The Priest—instill a sense of natural wonder that is hard to match. (Note: This hike should not be confused with another Crabtree Falls in nearby North Carolina.) 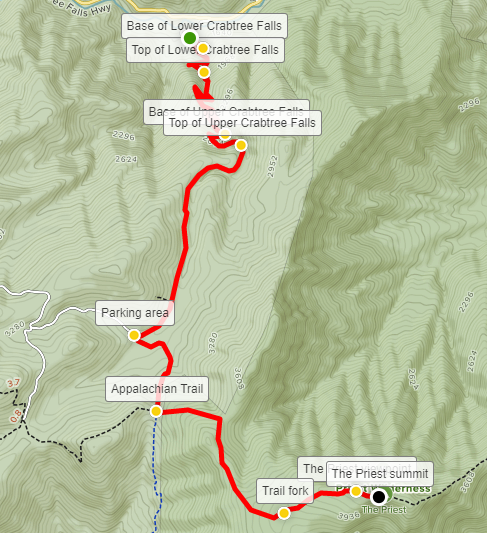 The one downside, of course, is that the (arguably) tallest waterfall in the eastern United States attracts a throng of visitors: the Crabtree Falls parking area in George Washington National Forest is often swarming with hikers. If you arrive after 10am on a busy weekend, expect to park a good distance from the trailhead. (Note: All vehicle owners must pay $3 to park.)

The parking area is situated along the Tye River, which—at least in spring—is raging at a rapid clip. The trail begins on the south side of the river. Once parked, make your way toward the pit toilets, located on the second tier of the parking area (uphill from the river). Here a large information board marks the start of the Crabtree Falls Trail.

The path begins as a wide, paved, and wheelchair-accessible track, skirting a vegetated slope on the right. Near the start is a small graveyard, the final resting place for members of the Fitzgerald family, who lived at the base of Crabtree Falls in the 19th century.

As mentioned, Crabtree Falls drops in fits and starts, and the base of Lower Crabtree Falls can be reached in around just 150 yards from the trailhead. The multi-tiered cascade here is impressive in itself, although just a preview of what is to come.

From this initial viewpoint, the climb begins: a dirt track takes off from the paved path, leading into a lengthy bend that cuts away from Crabtree Creek. After rounding a sharp switchback, the trail edges back toward the stream, bounded by high greenstone cliffs on one side. At about ¼ mile, the footpath returns to the creek, where an overlook provides stunning views. Below, Crabtree Creek hurdles over a two-tiered drop, while a look upstream reveals a glimpse—through the trees and brush—of an even higher waterfall ahead.

Climbing along the greenstone cliffs 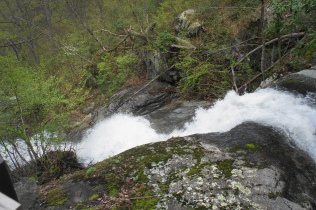 Crabtree Falls plummets toward the earth

From here, the trail ascends a set of staircases, up a slippery escarpment abutting the creek. By 3/10 mile, hikers reach the base of an impressive torrent of water, dropping roughly 60 to 80 feet, the highest single drop yet.

From here, the path repeats its tried-and-true formula: the trail draws away from the creek, with the sounds of the pounding falls gradually receding, before then switching back again toward the stream to a viewpoint of another falls. Flanked by rhododendrons, the stream plummets with great haste toward the earth, while the steep angle of the drop allows for views through the trees to Fork Mountain (3,240’) to the north. By now you have reached the ½ mile mark. 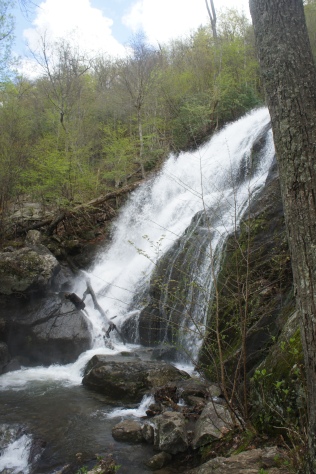 View downstream, with Fork Mountain beyond

Once again, the trail pulls off to the right and ascends another short switchback. Returning to Crabtree Creek, a wooden platform marks what appears, at least at first, to be the top of the falls. However, a look upstream—past a short section of relative calm—reveals another torrenting flume in the distance.

At 6/10 mile, the trail levels off for a brief period, following the west bank of the relatively gentle stream. A dark, cave-like opening amid a jumble of greenstone on the right provides brief respite from the day’s sun and heat. At about the 8/10-mile marker, the trail approaches the base of another two-tiered waterfall.

Cave along the Crabtree Falls Trail

Following lichen-covered walls, the Crabtree Falls Trail cuts right again and resumes its steady ascent. The trail follows a wide switchback to the top of the latest cataract, above which the creek is descending a series of smaller cascades. Looking upstream, one can catch initial glimpses of Upper Crabtree Falls, the highest and mightiest of them all.

It is still more than a quarter mile from here to the base of the upper falls, however, as the trail bends back and forth again to gain elevation. A short spur at around 1.1 miles leads to a view of the water as it plunges down the sun-soaked cliff. It is not until about 1.4 miles—about 800 feet higher than the elevation at the trailhead—that hikers approach the base of Upper Crabtree Falls. Relatively free of tree cover, this photogenic flume is the thunderous climax of the initial Crabtree Falls section.

Of course, the trail continues onward, switchbacking again up the hillside to the top of the falls at 1.7 miles. But from the viewing area atop Upper Crabtree Falls, all but the lip of the flume is obscured from view. The overlook does offer unobstructed views of the surrounding mountains, however, with Fork Mountain again the most prominent. Down below is the Tye River Valley, where the hike began.

View from the overlook

The vast majority of visitors who make it this far, content with what has already been a fantastic hike, turn around here and head back down to the trailhead. Those seeking a serene vista to match the beauty of the falls, however, can continue onward to the summit of The Priest (4,063’). From the overlook atop Upper Crabtree Falls, retrace your steps over the wooden bridge above Crabtree Creek, then bear left on the fainter but still relatively well-trodden trail.

The creek above the falls is noticeably more peaceful, and a few minutes distant from the overlook, it’s hard to imagine from the quiet rippling of the creek that a mile-long torrent is just ahead. While hugging the creek for around 1/10 mile, the trail briefly diverts to the right to avoid a set of fallen trees. By the 2-mile mark, the trail is back to its original tread, and small cascades along Crabtree Creek have begun to return.

The trail for the next 8/10 mile is relatively level and uneventful, save for the remains of a stone structure on the right at about 2.5 miles. At 2.8 miles, the trail ends in an area called Crabtree Meadows, where hikers are greeted with an uninspiring, gravel parking lot with pit toilets. (Note: It is possible to drive up to this point on State Route 826, although four-wheel drive is recommended.) The information board, once evidently useful, is now stripped bare, leaving only the wooded structure, adding to the gloominess of the place.

Crabtree Meadows to The Priest (2.0 miles)

The approach to The Priest unfolds in several phases, with the first being a largely undistinguished meander along gravel roads. From the parking area, take a left on State Route 826, following it down to the banks of the creek. Cross the stream, then continue uphill past a group of rarely-used campsites. You are now on the Shoe Creek Trail, an obscure four-wheel drive route usually known only to 4×4 enthusiasts.

At about 3 miles from the trailhead, the gravel road steepens significantly, making for a tough but short slog up to the ridgeline. You are climbing through the Religious Range, not a proper mountain range but rather a group of religion-themed peaks, named The Priest, The Friar, and The Cardinal. At roughly 3,300 feet above sea level—and 3.4 miles from the trailhead—the Shoe Creek road crests a high gap and reaches a junction with the Appalachian Trail (AT), the famed 2,200-mile track that spans from Maine to Georgia. (Note: It is possible to miss the AT because of a lack of signage; however, look for the AT’s typical white blazes, which are clearly visible.)

Entering The Priest Wilderness along the Appalachian Trail

From here, take a left (east) on the AT, which leaves the road behind and enters The Priest Wilderness, a nearly 6,000-acre tract of land, free of the blemishes of development. As the AT gradually climbs, one can spot through the trees a higher peak ahead—do not be fooled, as this is not The Priest, but rather a lower point called Pinnacle Ridge (3,707’). As hikers pass through a gap in the ridgeline, however, the trail cuts sharply right and the towering hulk of The Priest finally comes into view (barely, through the thick tree cover) across Cox’s Creek Valley.

View toward The Priest (right)

As the trail climbs southward, it follows a narrowing spine with some limited views on either side before turning east again and flattening out considerably. At 4.25 miles, the AT passes a peculiar rock outcropping (a plump boulder appears to stand upright atop another) and then reaches a four-way junction. While AT thru-hikers may seek a night’s rest at The Priest shelter (straight ahead), day hikers to The Priest should head left toward the summit.

The final stretch requires a gradual climb through increasingly windswept terrain. Views are largely obscured until around 4.4 miles, when a set of spur trails lead out to decent vistas. But the best viewpoint comes at around 4.6 miles—a group of granodiorite (I think) ledges offer one of the finest perches in the state: a blissful view to the north and east, with Cox’s Creek Valley unfolding more than 2,000 feet below. 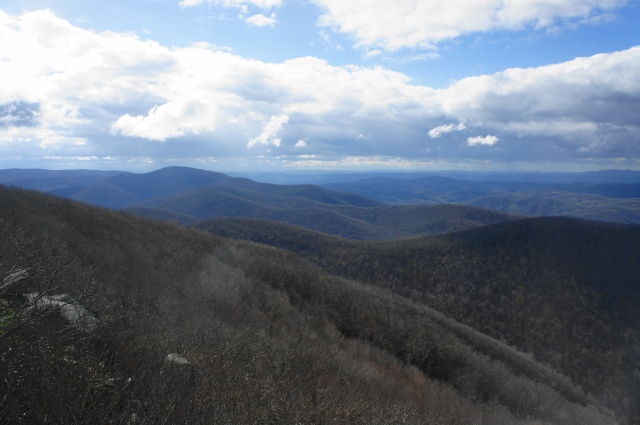 View northwest from The Priest toward Pinnacle Ridge, Spy Rock, and Maintop Mountain

To the northwest, on a clear day, one can clearly see across Pinnacle Ridge to Maintop Mountain, Spy Rock, and even the Great North Mountain area in the distance. Straight north, beyond Pinnacle Ridge is Fork Mountain, Round Mountain (3,440’), and the Saint Mary’s Wilderness. The Three Ridges and Chimney Rock dominate the scene to the northeast, while the continuation of the Blue Ridge Mountains stretches onward to the horizon. Though not visible from the overlook, the gap between the Three Ridges and The Priest leads to the abrupt eastern flank of the mountains and unfolding Piedmont.

View northeast from The Priest

While not the true summit of The Priest, this is by far the best viewpoint on the mountain. Determined hikers can venture 2/10 mile further to the real high point, but—aside from some limited views through the trees—the area is largely obscured.

Obscured views from near The Priest summit

The summit is roughly 4.8 miles from the trailhead, meaning a lengthy and winding return journey that brings the total hike to about 9.6 miles round-trip. While not a loop, most hikers will be pleased to retrace their steps through the action-packed Crabtree Falls section, one of the most stunning natural beauties in Virginia. For most, the out-and-back trip will take much of the day. (Note: It took us about 5 ½ hours on our April 2019 trip.)