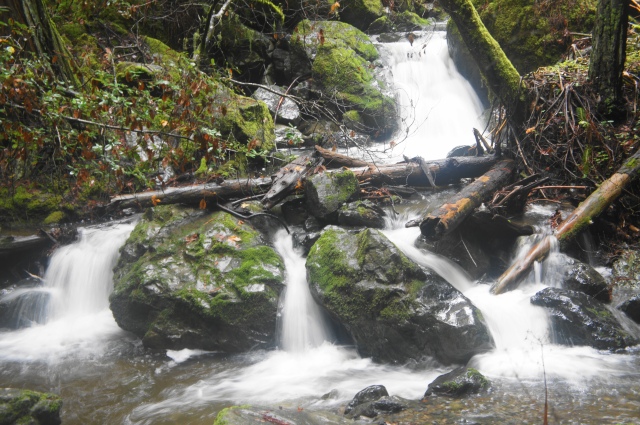 The redwood groves of Muir Woods National Monument, while lovely, have a people problem. Within a half-mile radius of the park’s tiny visitor center, there are scores and scores of visitors. Yet the western stretches of the park—or better yet, the areas belonging to Mount Tamalpais State Park that surround Muir Woods—solitude and wildness are much more likely to be found. This post describes a moderately difficult circuit that covers the popular core of Muir Woods but also its underappreciated upper reaches, beginning and ending at the Pantoll Ranger Station in neighboring Mount Tamalpais State Park. (Note: There are other loop options in the area—such as the Ben Johnson-Dipsea Trail Loop, which is shorter—but the Dipsea is only worthwhile if it’s a clear day, a relatively rarity on the Marin Peninsula.) On a cloudy or foggy day, especially in winter/spring when the waters are rushing, try this wooded but scenic Ben Johnson – Bootjack Trail Loop. 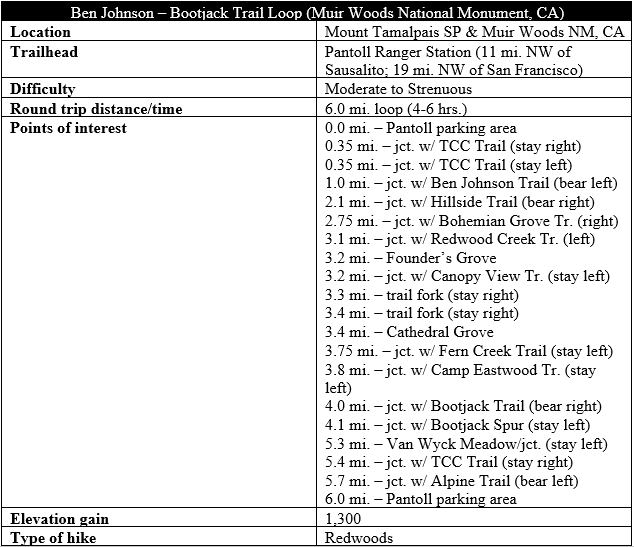 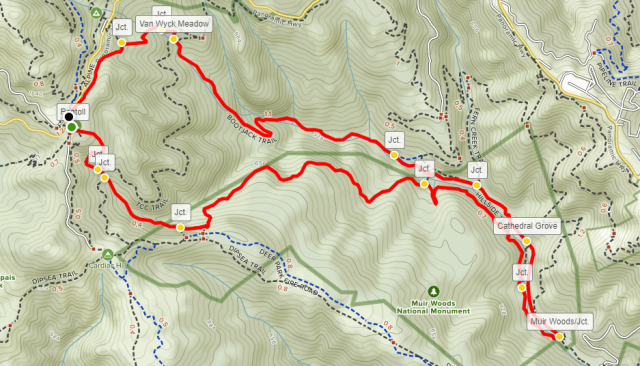 There is clear benefit to approaching Muir Woods from outside the park: visitors can eschew the mandatory parking/shuttle reservation required for those who enter Muir Woods by car. Granted, parking at Pantoll Ranger Station in Mount Tamalpais State Park isn’t cheap—$8 for the day—but doing so will save you the headache of swimming through the masses to enter Muir Woods. (Note: On weekends, Pantoll is often full, but there is nearby parking at Bootjack, Rock Spring, or Mountain Theater.)

From the Pantoll parking area, trails split off in all directions. Although the majority of the hike follows the Ben Johnson and Bootjack Trails, it begins on the Staplevelt Trail, situated back at the entrance to the parking lot, just off the Panoramic Highway. (Note: You can also see the entrance to the Alpine Trail, which will be your return route.) Follow the Staplevelt Trail as it climbs into the woods and mounts a stony hillside, cutting directly through the Pantoll Campground. 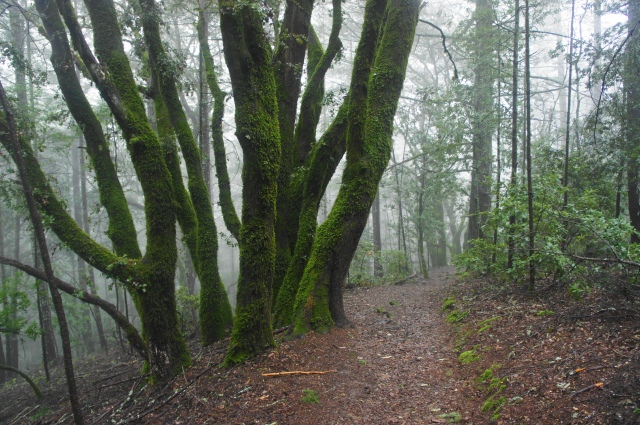 Staplevelt Trail on a foggy day in December

After 125 yards, the single-track begins a steady descent, leaving the campers behind. Wiry oaks and bay trees abound as the path gradually sheds elevation. Winding southward, the Staplevelt Trail traverses a couple of side ravines, then drops into a stream valley where hikers encounter the first trail fork: stay right on the Staplevelt Trail, then, steps later, bear left, as the path intersects the TCC Trail. From here the valley begins to take fuller form, fed by a tributary of Redwood Creek. 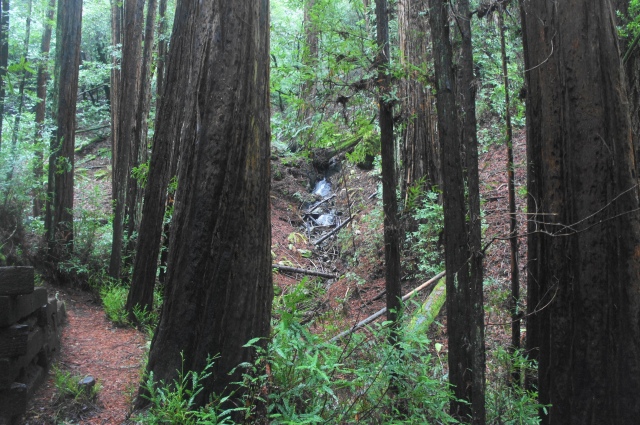 Cascades from a side tributary along the Staplevelt Trail

After an initial set of long switchbacks, the trail drops in earnest through a series of wiggles, as smaller, second-growth redwoods begin to dot the hillside. The first set of large redwood trees is reached at around 6/10 mile. Traverse three subsequent bridges, taking in the fine landscape, made even more attractive when rain-fed tributaries flow in from the sides of the gully. The Staplevelt Trail comes to an end at around the one-mile mark, but continues, past a trail junction (stay straight), as the Ben Johnson Trail. By now you have entered Muir Woods National Monument. 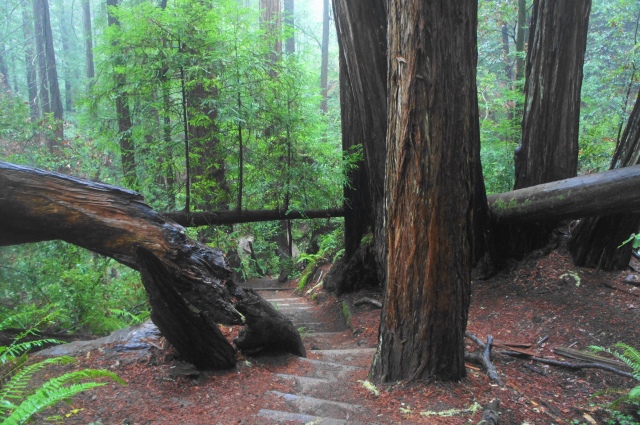 The scenery along the Ben Johnson Trail gets better and better as it gradually descends, rounding a corner into the main Redwood Canyon. The path keeps its distance from the valley floor, however, instead offering views looking down at the increasingly thick old-growth redwoods. At 1.75 miles, the trail rounds a fern-studded ravine and then traverses a bridge clearly built out of a carved-out redwood trunk. At two miles, the Ben Johnson Trail descends a staircase through a particularly scenic section, complete with more towering giants and another redwood bridge.

Finally, at about 2.1 miles, hikers reach another trail junction, now deep in the heart of Muir Woods National Monument. And here come the crowds: you are now close to the central thoroughfare in the park. Bear right at the junction, following the Hillside Trail as it climbs a set of stairs and then rounds a long bend to clear a brush ravine. The Hillside Trail stays well above the valley floor, although part way down the route, the base—Redwood Creek—becomes visible. The path traces around side ravines with redwoods towering above, then descends, at 2.75 miles, to a heavily-trafficked junction. 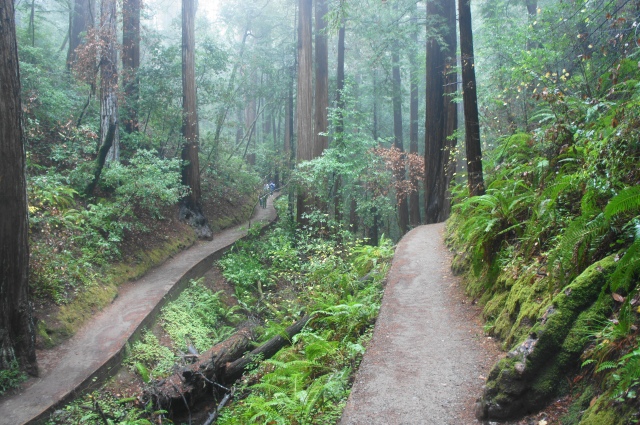 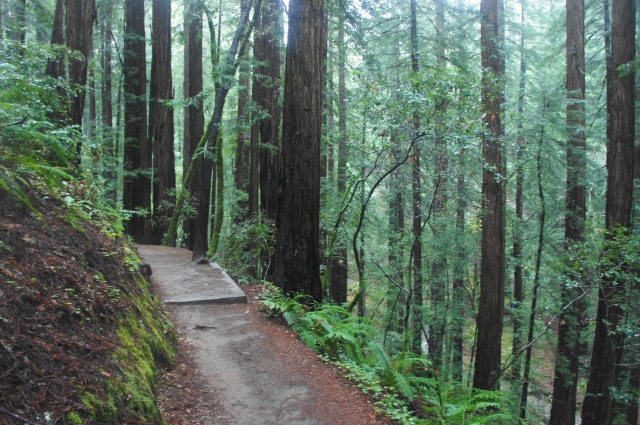 Bear right on the neatly paved Bohemian Grove Trail, which features intermittent interpretive signs about the beautiful grove in your midst. The wide path weaves through old-growth trees, enriched by the moistness of nearby Redwood Creek. The stream is visible on your left, and the trail enters a thicket of bay and willow trees at around 2.9 miles. From here it is steps to a wooden bridge over the creek (Bridge #1), bringing hikers to the main Redwood Creek Trail. The park café and store are straight ahead, while the Visitor Center and Muir Woods parking area is situated off to the right. 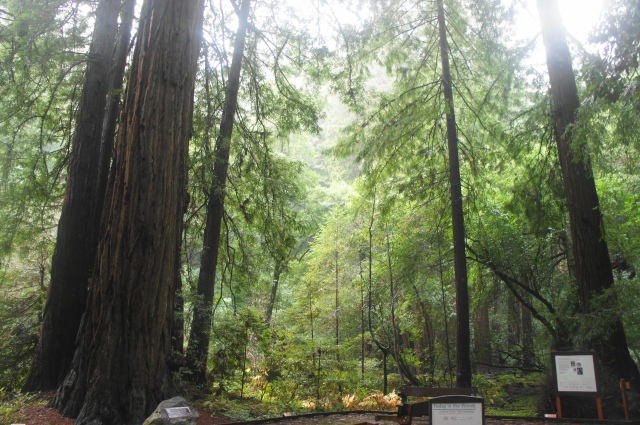 From here, bear left on the wooden boardwalk, the main thoroughfare in the park. Stay straight as you pass the turnoff to the restrooms on the right and visit the cross-section of a fallen redwood. From here, enter Founder’s Grove, a small stand with a few hefty redwoods, including the Pinchot Tree, named for Gifford Pinchot, the first head of the U.S. Forest Service and the key player in establishing Muir Woods National Monument. Ironically, Pinchot was a lifelong rival of John Muir, for whom the park is named; while Muir advocated conservation of wild places to preserve them as they were, Pinchot was more willing to accommodate use of public lands for resource use, such as logging. Today, park rangers lead regular “Tree Talks” at Founder’s Grove, telling the story of Pinchot, Muir, and beyond.

From Founder’s Grove, continue straight, with the wood surface giving way to asphalt. The Redwood Creek Trail follows its namesake stream on the left and reaches a junction with the Canopy View Trail at 3.2 miles. Stay straight again, then pass a fork leading to Bridge #2 on the left. All the while, towering redwoods fill the sky above, while ferns and other greenery create a verdant understory. 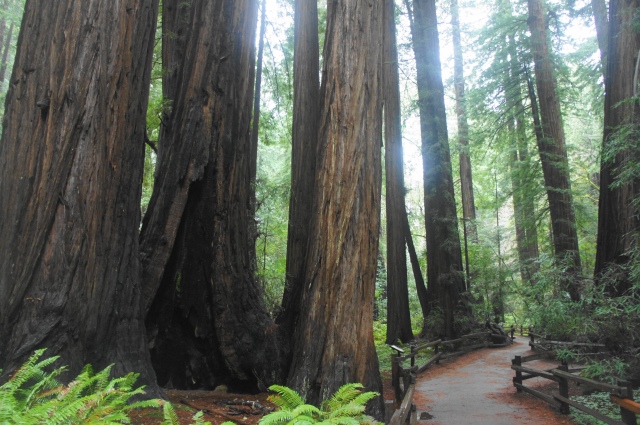 After passing Bridge #3 on the left, continue into Cathedral Grove, the most impressive batch of redwoods in the park. The trees in this grove have withstood the test of time, some for more than a thousand years. 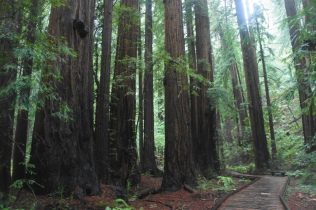 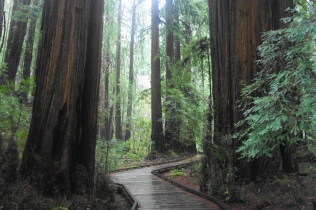 The redwoods continue as the wide path passes a junction with the Fern Creek Trail at 3.75 miles, then a junction with the Camp Eastwood Trail a minute later. By now, farther from the main Muir Woods parking area, the crowds thin and hikers can enjoy the quiet natural beauty of an otherwise busy group of redwoods. Interlaced among the redwoods, moss-laden bay trees stretch in wild directions, some extending over Redwood Creek. 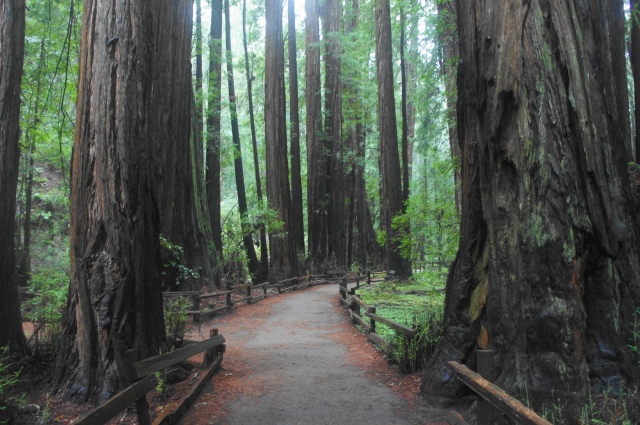 Finally, at about the 4-mile mark, bear right on the Bootjack Trail, leaving the pavement behind. The opening stretch of this beautiful trail leaves Muir Woods National Monument, reentering Mount Tamalpais State Park, but the redwoods continue to cluster around the stream. As hikers pass a junction at 4.1 miles, Redwood Creek begins to pick up its pace, dropping down a set of minor cascades. 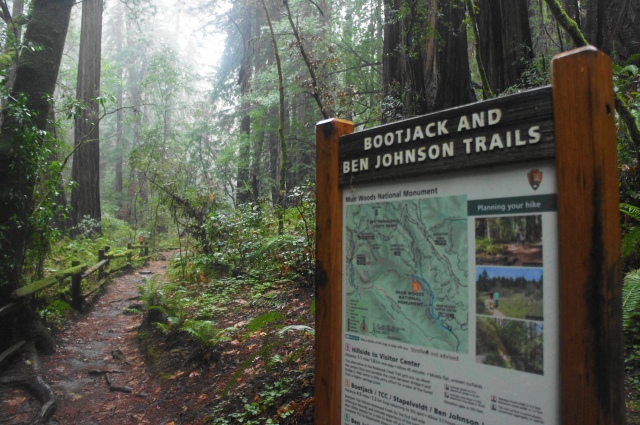 Start of the Bootjack Trail

As the canyon narrows, the trail rises higher and higher above the streambed, and moss-laden rock outcrops becomes more ubiquitous. The subsequent section is one of the most stunning in the park, but only when the creek has relatively high volume (e.g., December-March or after recent rains). Before you know it, the trail is more than 50 feet above the stream, and Redwood Creek is tumbling over a series of rather significant cascades. At 4.5 miles, the stream splits into two forks, and the trail follows the right one, up into an intimate ravine. By now the trail has become a steep slog, made worth it by the picturesque setting. 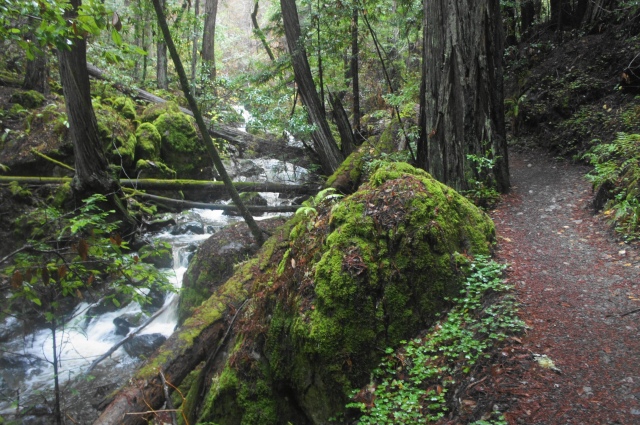 At about 4.7 miles, there is a small but accessible waterfall on the left, a nice place to stop for a snack. The path from here continues to climb up to a lovely wooden bridge, which crosses over a set of cascades. Just beyond, at a left-hand bend and base of a staircase, it’s worth veering off on the social trail to the right to view a set of streams, each of which tumbles over a 6- to 8-foot plunge. 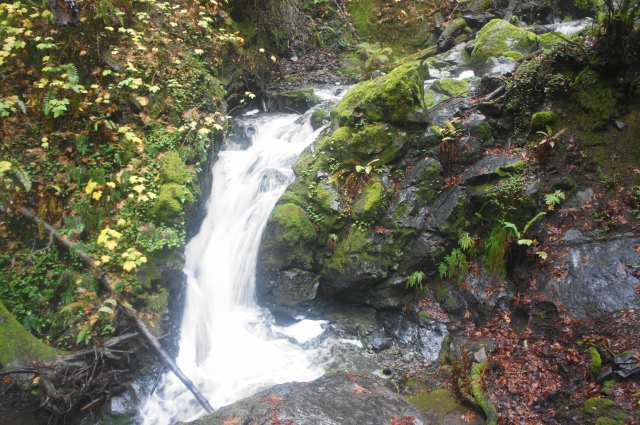 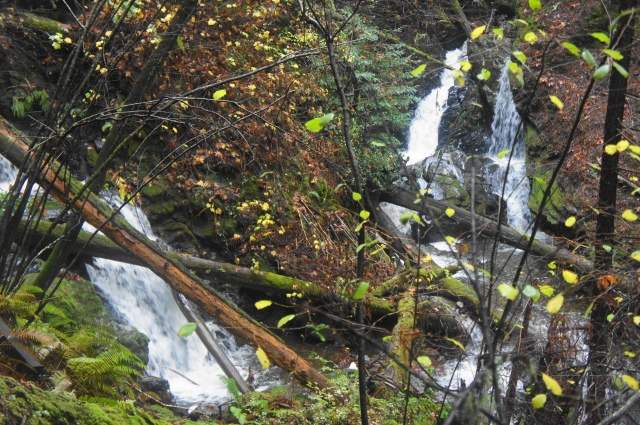 Two streams merge into one

From here, the trail climbs a steep staircase, then veers away from Redwood Creek for a moment, putting the view of tumbling waters in the rear-view mirror. But after rounding a right-hand bend to mount a ridgeline, the trail is back creek side at about the 5-mile mark. Continue up another set of wood/stone stairs, then across a bridge over Redwood Creek. At 5.2 miles, the creek splits again, losing much of its juice, though the now-minor cascades are easily accessible on the left. 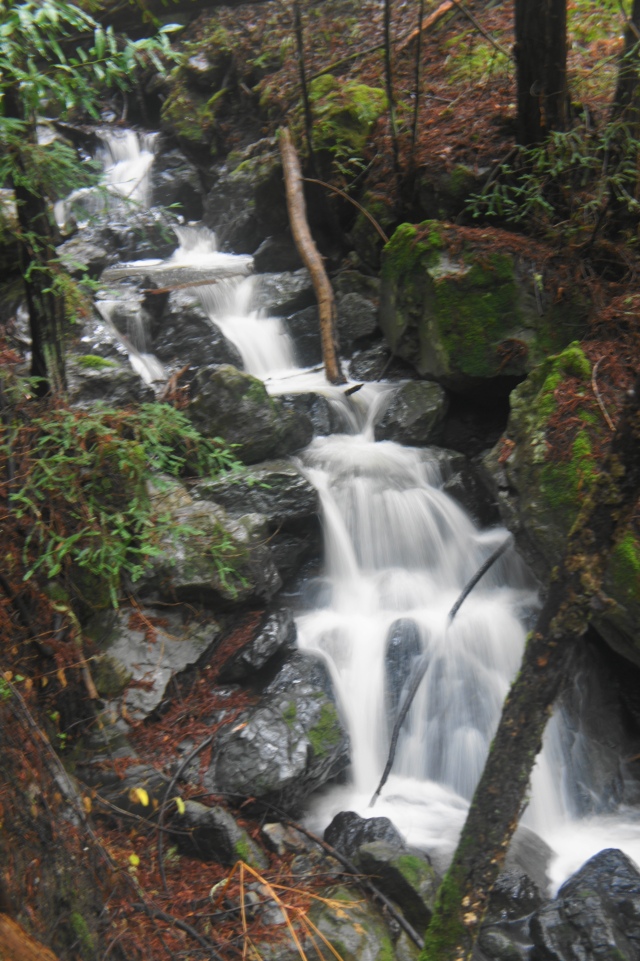 Redwood Creek along the Bootjack Trail 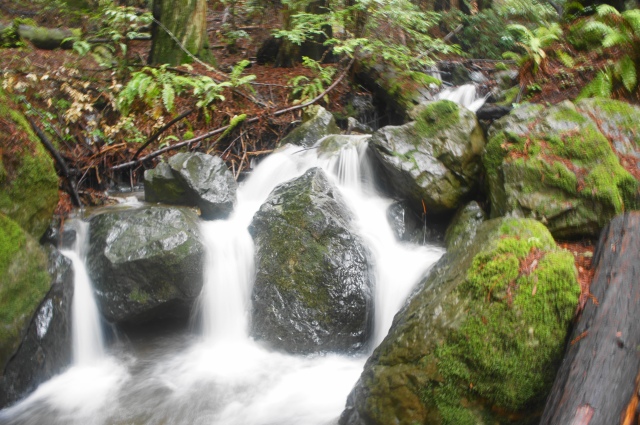 Finally, at 5.3 miles, the trail turns away from the creek and climbs a staircase to Van Wyck Meadow, a small clearing that used to have a population of three. Continue left at the first junction, then, at the end of the meadow, stay right at the second fork, continuing on the Bootjack Trail. Stay straight at a third junction at 5.45 miles, then traverse a bridge over Redwood Creek for the final time. 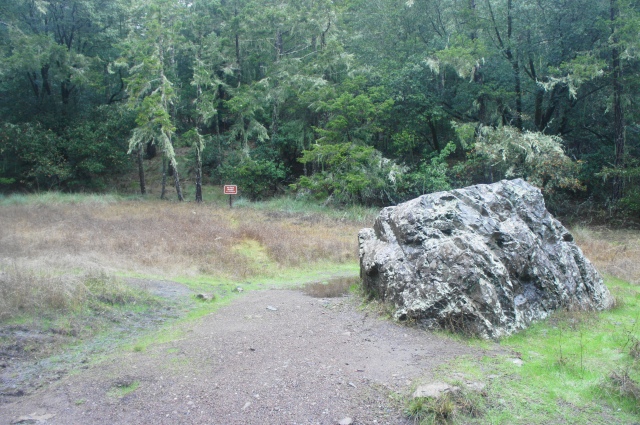 From here the Bootjack Trail climbs steeply up and around a right-hand bend and reaches a fork with the Alpine Trail at 5.7 miles. Bear left on Alpine, following it as it climbs up a minor ravine to the edge of Panoramic Highway, visible on the right. After a short downhill, the trail ends back at the Pantoll Ranger Station, completing the 1,300-foot ascent back from Muir Woods to the initial trailhead.

The entire circuit clocks in at around six miles. With the excellent scenery and steady uphill, however, allot more than the usual two miles per hour. Four to six hours should do the trick, making this a half- to full-day hike.