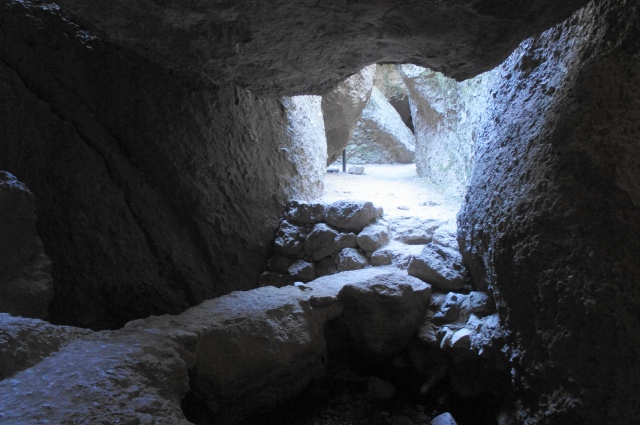 Sporting one of California’s finest talus caves and shoreline access to a picturesque, rock-hewn reservoir, the Bear Gulch Cave Trail is one of the most popular hikes in Pinnacles National Park. Here a jumble of boulders, so large and tightly-packed that it blankets the ground with darkness, forms subterranean passages home to a resident colony of big-eared bats (though rarely seen). Beyond the reservoir, rock outcrops and excellent views of Bear Valley, the High Peaks, and the broader Gabilan Range entertain visitors returning to the trailhead via the Rim Trail, capping off a short, 1.5-mile loop. (Note: Bring a flashlight for the cave, and check at the Visitor Center to ensure that the caves are accessible. Upper Bear Gulch Cave is generally open for only a short window in late March and late October and thus excluded from this description. The lower cave is usually open year-round except between mid-May and mid-July.) 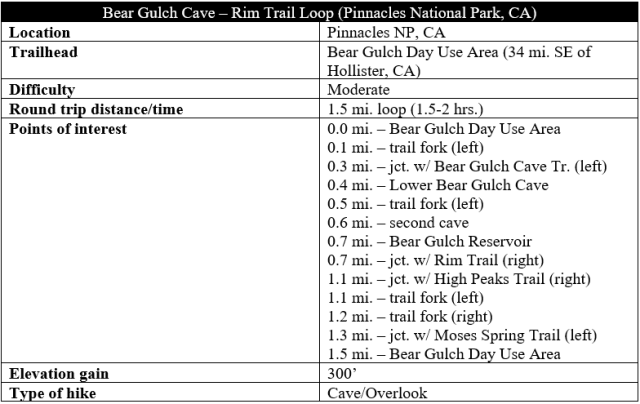 The moderately difficult circuit hike begins and ends at the Bear Gulch Day Use Area in the eastern section of Pinnacles National Park, situated at the end of Pinnacles Highway, roughly 3.3 miles from the Pinnacles Visitor Center. (Note: Continue past the Bear Gulch Nature Center, which serves as the starting point for the more strenuous Condor Gulch-High Peaks Trail Loop. Parking is somewhat limited at the Bear Gulch Day Use Area; if there are no spots, backtrack to the Nature Center and park there, then follow an easy, wide path through a picnic area for ¼ mile to reach the trailhead.)

Start of the trail heading up to Bear Gulch Cave

From the trailhead, follow the well-worn and obvious path southward; this is technically the Moses Spring Trail. (Note: A trail sign offers updates on the status of cave closures.) The trail begins by climbing through oak woodlands, leaving the base of Bear Gulch behind. At 1/10 mile, hikers enter a narrow canyon with shaded walls of breccia and the characteristic boulders that form the dark caves ahead. After climbing through a rocky notch, the drainage widens again, revealing a lush riparian landscape, a relative rarity in a park dominated by dry chaparral.

Bear left at the first trail junction, where the High Peaks Trail comes in from the right. (Note: This will be your return route.) Following a dry creek bed upstream, the Moses Spring Trail cuts through a short tunnel at ¼ mile climbs to a large boulder with open views up-canyon. The rhyolite outcrops here take on a gray-orange hue, with occasional splotches of red and yellow. Just beyond, stay left at the trail fork, starting up the Bear Gulch Cave Trail.

At 4/10 miles, the trail passes through a narrow slot, passing a high alcove on the right. Just beyond, a trail sign (“Caution Flashlights Required Low Ceilings Slippery When Wet”) marks the start of Lower Bear Gulch Cave. Don your headlamps here and prepare for cooler temperatures as you enter the spooky darkness. 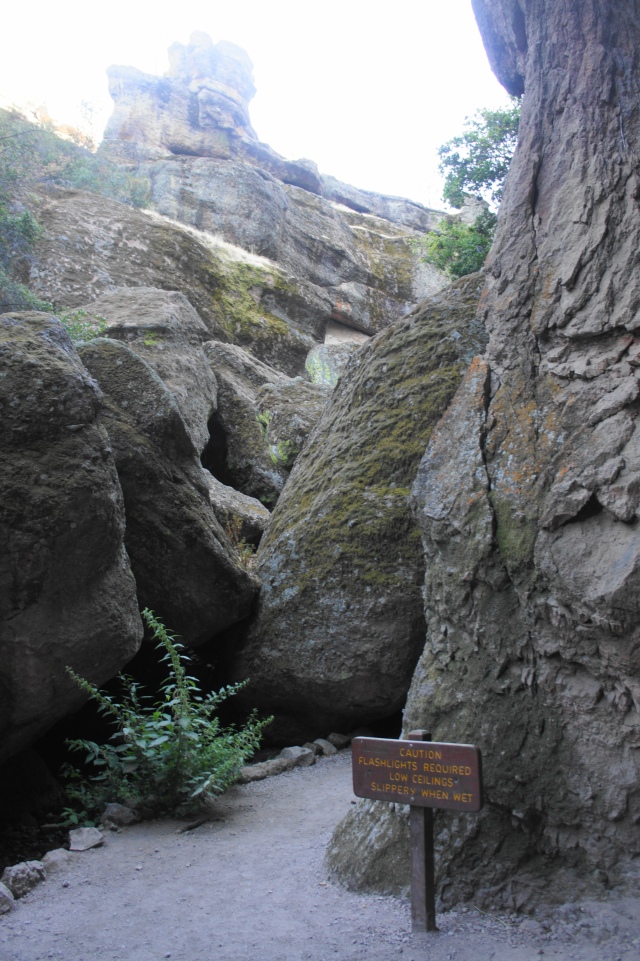 After passing under an initial low overhang, the ceiling rises to around 40-50 feet, and the trail traverses a short bridge over Bear Creek, which is likely to be dry much of the year. Bear Gulch Cave began as a basic canyon, formed by faults and fractures in the igneous rock. Yet over time the narrow slot filled with massive boulders, forming a dark ceiling above. Green lichen blankets the walls, shielded from the menacing sun and soaking up the rare rains that reach Pinnacles a handful of times per year. 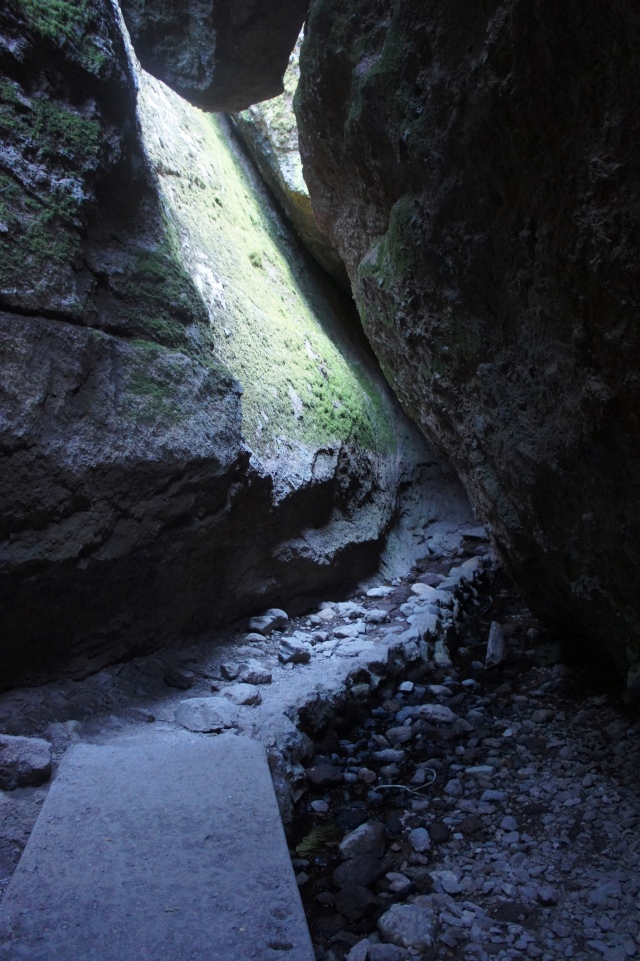 Continuing through the thin channel, the cave gets darker and darker, and a hiker’s staircase provides onward passage. Metal railings assist with the climb and provide security from the sheer drops into the dimly-lit cracks below.

Clearing a set of chockstones, the ascending stairs end at a dark passageway with a fork: the continuing trail to Upper Bear Gulch Cave heads right (but is closed most of the year). Unless you are lucky enough to visit when the upper cave is open, you will be forced to exit the cave through a narrow slot to the left.

Exit up out of the cave

Another trail fork awaits once you emerge back into the sunlight at around ½ mile. Heading right leads to a popular climbing area (Discovery Wall), as well as the continuation of the Moses Spring Trail, which skirts the top of the cave. Head left at the junction, continuing as the Bear Gulch Cave Trail bounds up a hillside, then through another narrow notch above the upper cave. 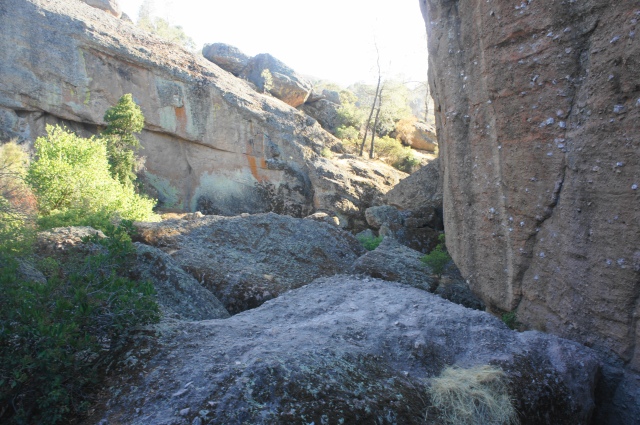 Don’t put away your headlamp yet, however, as there is another dark passage to come. After spending about 125 yards in the open, the trail descends again into a second cave, this one not as dark or long but perhaps equally scintillating. The trail passes over the creek again, with huge chockstones barely suspended above the ground. 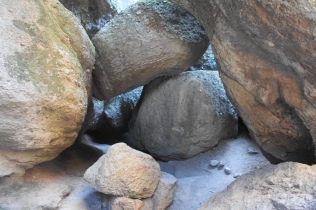 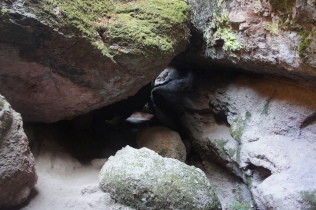 In the second cave

Passing under a huge chockstone

At 6/10 mile, the path emerges back into the sun, climbing a staircase through a gully lush with vegetation. The man-made wall above acts as the dam for the Bear Gulch Reservoir, situated at the top of the steps. 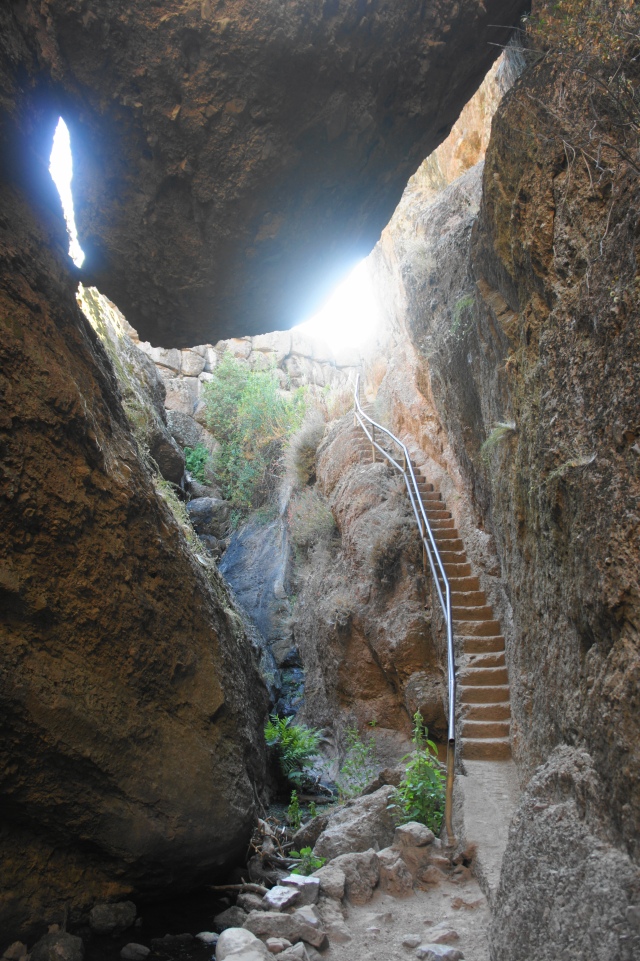 Exiting the second cave, up to the reservoir

While man-made lakes are usually nothing to write home about, the striking setting of Bear Gulch Reservoir—rimmed by hefty boulders and walls of natural stone—makes for a picturesque sight. Frogs, fish, and dragonflies frequent the area (as well as a troupe of rather aggressive squirrels, accustomed to human interaction), and the reservoir is a popular lunch spot for families visiting the park.

Once ready, either head back the way you came, down through the two caves, or take the fork heading to the right, following the Rim Trail back toward the Bear Gulch Day Use Area. This scenic route ascends a rocky slope, passing two large monoliths on the right. As views of the reservoir dissipate, vistas down Bear Gulch to the northeast open up. 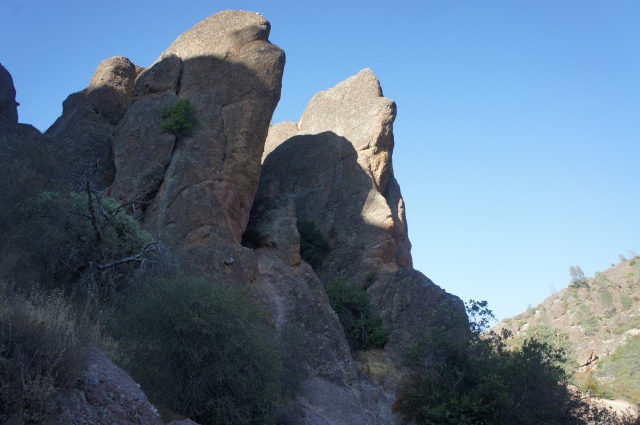 After passing a vertical drop into a chute on the right, the trail levels off and heads north toward a set of rock outcrops; the big thumb-shaped stone on the right is called Teaching Rock and has excellent views east to Bear Valley. Up to the west are the towering precipices of the High Peaks. 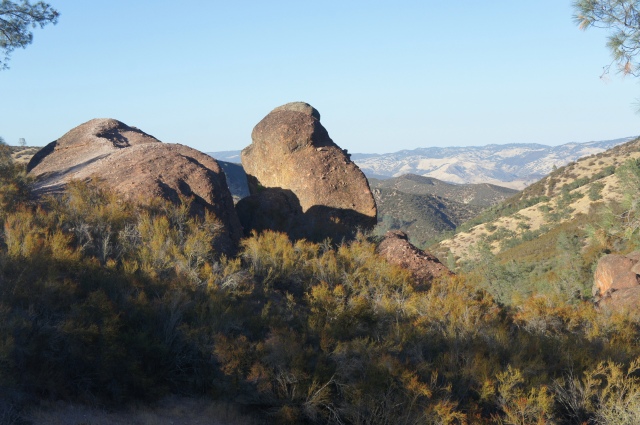 Teaching Rock along the Rim Trail, with Bear Valley beyond

Beyond is a downhill section that hugs the rim of Bear Gulch Canyon, followed by a spur right to the top of the Discovery Wall pitch at the one-mile mark. Stay left, descending further and passing a toadstool-shaped rock on the right. At 1.05 miles, hikers will reach a trail junction that is easy to miss; take a hard right on the High Peaks Trail, heading downhill into a side gulch. The decline picks up as hikers pass another spur on the left, this one leading back toward the cave and the base of the Discovery Wall climbing area.

Peering down into Bear Gulch from Rim Trail

Looking down into Bear Gulch

Round a sharp, right-hand bend into the ravine at 1.2 miles, then stay on the main trail as a spur on the left leads to the “Tourist Trap” climbers’ area. Finally, after a series of switchbacks, the High Peaks Trail enters the main gully again and connects with the initial turn on the Moses Spring Trail. Stay left and follow the well-worn path back down through the oak woodlands to the Bear Gulch Day Use Area.

Descending to the Bear Gulch Day Use Area

Hikers should allot around 1.5-2 hours for this moderately difficult hike.