Posted on January 5, 2020 by Andrew Wojtanik 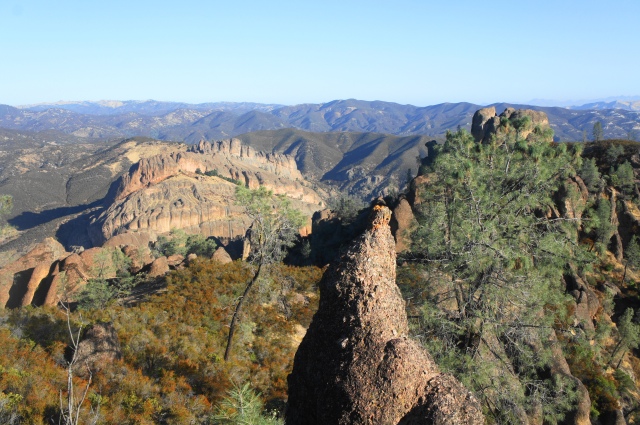 Originally the work of volcanoes 23 million years ago, the rocks of today’s Pinnacles National Park were moved, upended, chiseled, and weathered by water, wind, and the infamous temper of the San Andreas Fault in central California. The result is a wild paradise of formations, boulders, spires, and talus caves, less than a two-hour’s drive from the San Francisco Bay Area. Perhaps the best hike in the park is the 5.1-mile Condor Gulch-High Peaks Trail Loop, including the famed Steep and Narrow section, complete with railings and footholds to assist hikers up and down chunks of red-grey breccia. Excellent vistas abound, extending north across the Gabilan Range, east across the San Andreas Rift Zone, south to Chalone Peak, and west over Salinas Valley to the Santa Lucia Range. Look for California condors, the rare and massive birds that inhabit the Pinnacles area. 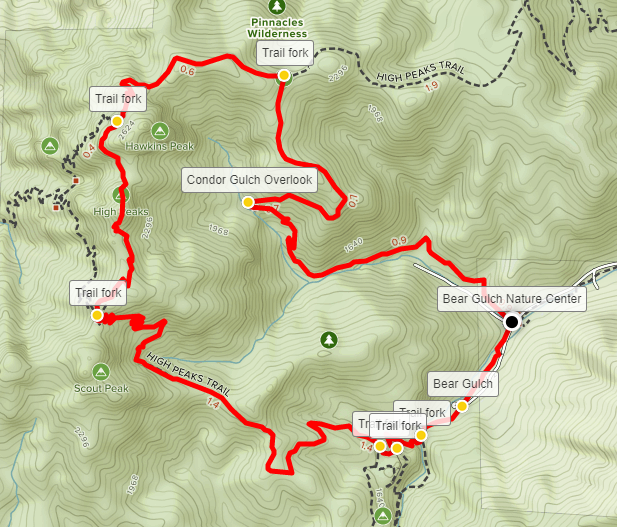 The hike begins from the Bear Gulch Nature Center parking area, situated three miles up Pinnacles Highway from the Pinnacles Visitor Center in the eastern section of the park. (Note: It is also possible to access the High Peaks Trail from the west, starting at the Chaparral Parking Area.) Pinnacles was recently redesignated from a national monument in 2013, and park visitation has grown as a result. Parking at the Nature Center is relatively limited, so arrive early in the morning to secure a spot. (Note: If hiking in summer, when temperatures in the High Peaks can reach well over 100 degrees, definitely start this hike very early.)

From the Nature Center, cross Pinnacles Highway to the north to catch the start of the Condor Gulch Trail, your primary approach route to the High Peaks area. Cross a short bridge over a seasonal streambed, then cut left as the trail begins to ascend the right-hand hillside. Oak trees and gray pines dot the hillside on the left, as the Condor Gulch Trail parallels a paved service road in the valley below. At 250 yards, the trail rounds a side ravine, then continues to climb at a mild pace. By 3/10 mile, the path puts the road behind and enters what feels like raw wilderness: craggy hillscapes with towering spires ahead. 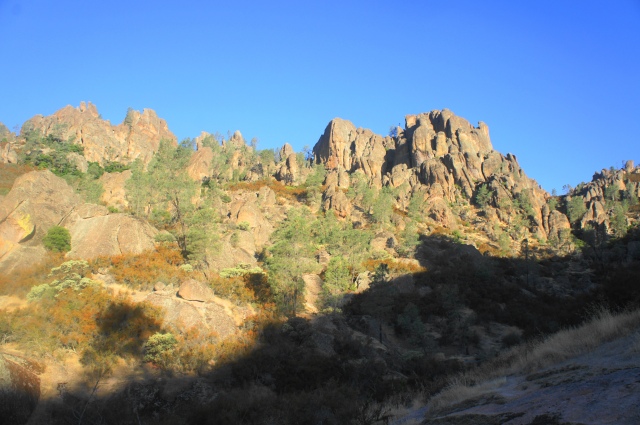 Around ½ mile, the incline steepens, then rounds a right-hand bend, following the northern fork of Condor Gulch toward the High Peaks. The amphitheater of rocks comes into full view around a switchback at ¾ mile. Round a pair of switches then continue northwest along the route to the Condor Gulch Overlook at the one-mile mark.

The high pinnacles ahead of you are primarily composed of red-gray breccia, a form of volcanic rhyolite fused with fragments of minerals cemented together into a fine-grained matrix. The Pinnacles Volcanic Field took form around 23 million years ago and was thrust upward through volcanic activity along the San Andreas Fault Line. Movement of the plates transported the rock that now forms Pinnacles about 195 miles north from its original birthplace. Over time, the volcanic field began to sink and the rock layers eroded away, leaving behind the hard breccia and other rhyolitic formations seen today.

Past the overlook, the trail cuts sharply to the east, climbing the hillside away from the High Peaks. Rounding a left-hand curve reveals a terrific view down Bear Valley to the east. To the south, the scrubby tip of Chalone Peak (3,304’), the highest point in the park, appears on the horizon. Heading westward and northward again at about 1.25 miles, the chalky trail climbs an open ridgeline with views of the Pinnacles returning on the left. At 1.7 miles, the Condor Gulch Trail ends at a junction with the High Peaks Trail heading east-west. Bear left, toward the High Peaks. By now you have gained over 1,000 feet in elevation, the bulk of the gain for the hike. 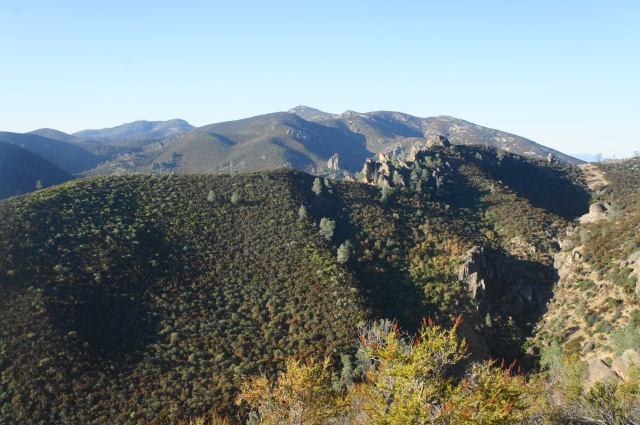 The next mile on the High Peaks Trail is a pure joy, marked by panoramic views and fun climbs in the heart of the Pinnacles formations. Previously blocked from view, unobstructed overlooks to the north open up: below is the deep canyon carved by Chalone Creek, which extends northward into the Pinnacles wilderness. To the northeast, one can see across Bear Valley and the rift zone to the mountains of Real de las Aguilas beyond. 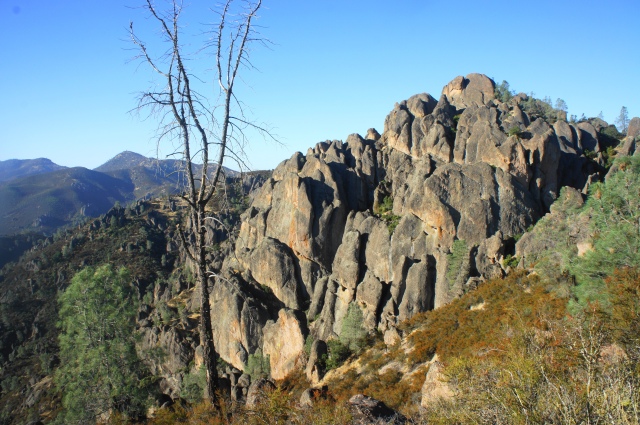 Pinnacles of the High Peaks

The trail continues to hug the north-facing slope as it climbs mildly into the heart of the High Peaks. The fluted cliffs of the Balconies area appear in the valley below, fronted by the fins of Machete Ridge. As the trail approaches a towering shark’s tooth formation at 1.9 miles, views open up in both directions: north across the Chalone Creek Valley and south toward Bear Gulch and Chalone Peak.

Pinnacles from the High Peaks Trail

The trail reaches a brief downhill as it skirts the western slopes of Hawkins Peak (2,720’), the tallest of the High Peaks. A high saddle at the two-mile mark offers a picturesque window view of the Balconies between two bulky outcrops.

The Balconies and Machete Ridge from the High Peaks Trail

From here it is back uphill, switchbacking to the left at 2.1 miles. By now one can spot the Jawbone Parking Area in the western section of Pinnacles National Park down below. To the west, across Salinas Valley, is the hefty Santa Lucia Range; the Pacific Ocean is just on the other side of these mountains.

After cresting a high point at 2.2 miles, the trail drops along the western flank of the High Peaks, reaching a trail junction. Here the Tunnel Trail—providing access to the Chapparal Parking Area to the west—comes in from the right. Stay left on the High Peaks Trail, entering the Steep and Narrow Section.

This section begins mildly, cutting through a narrow notch between high walls of breccia. Then the trail drops downhill before reaching another ascent with the trail’s first set of railing-assisted steps. Here the trail appears to climb straight up the steep spine of a rock outcrop; but the metal rail and deep-dug footholds make for a relatively straightforward climb. After the first railing section comes a second one, almost right away: this one is shorter but requires ducking one’s head to avoid clonking it on the bulging overhang above. 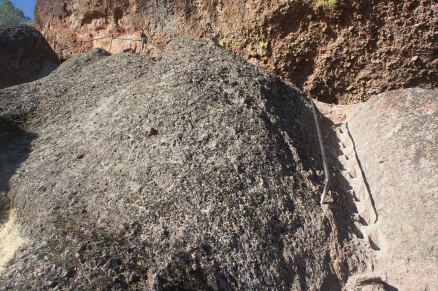 The High Peaks Trail then descends a set of steps before resuming the ascent again at 2.6 miles. Looking east, one can spot the Condor Gulch Trail snaking its way up the hillside below. After cresting a hump, the trail somewhat confusingly splits; stay right on the better path. This leads to the third and final railing section, a downhill that requires some concentration but again is rather safe and straightforward.

Peering down the third railing section

After a switchback left, a steady uphill leads to a right-hand bend. By now you are back on the ridgeline, with sweeping views to the west. The Steep and Narrow Section ends at about 3.0 miles, following a sharp descent to a high saddle with a bench and pit toilet. This is also the junction with the Juniper Canyon Trail, which enters from the right. Ahead is Scout Peak (2,605’), one of the highest in the park. 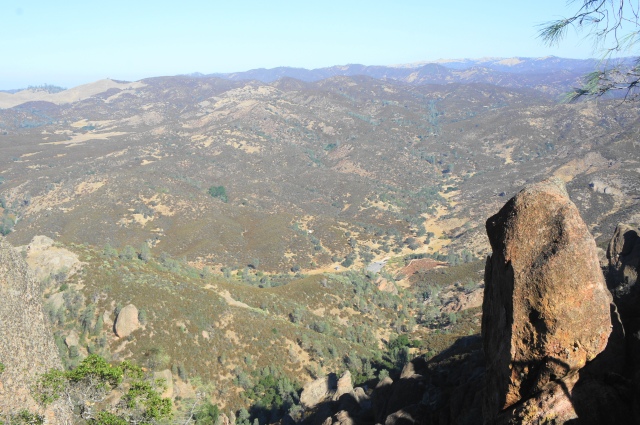 Looking west toward the Jawbone and Chapparal Parking Areas

From here, follow the High Peaks Trail left as it begins a steady descent down a series of short switchbacks. The trail settles into a side canyon emanating from Condor Gulch, leaving the High Peaks in the rear view. The winding wiggles end at around 3.4 miles with a pair of switchbacks, now choked with vegetation, including sporadic manzanitas. The subsequent route passes through a short tunnel and follows a relatively level ridgeline with open views to the south. 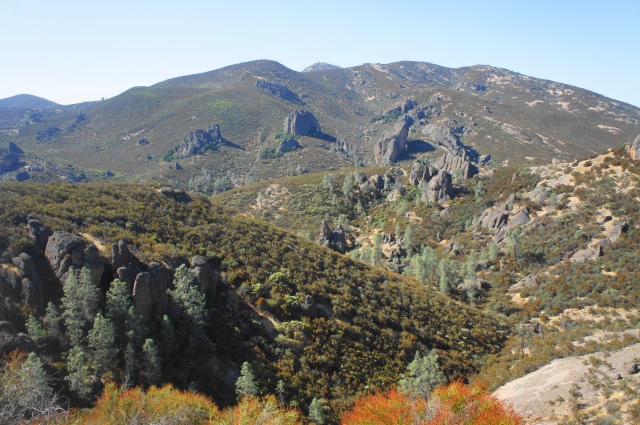 At the four-mile mark, the High Peaks Trail encounters a double mushroom-shaped outcrop on the left, then descends amid desert scrub into the Bear Gulch Area. Stay left at the trail junction at 4.4 miles; by now, crowds are likely to pick up as the trail enters the popular area around Bear Gulch Cave. At 4.5 miles, stay left again as a climbers’ access route heads off to the right. Then round a left-hand switchback, staying right again at the next climbers’ access spur. At 4.7 miles, bear left when the High Peaks Trail merges with the Moses Spring Trail, in the belly of Bear Gulch. From here it is a short downhill to the Bear Gulch Day Use Area. (Note: Hikers can bear left on the Rim or Moses Spring Trails to visit Bear Gulch Cave and the Reservoir to the hike, adding about a mile to the loop.)

Leaving the High Peaks behind

Once at the popular trailhead and picnic area, follow the trail continuation across the road. The wide path passes a number of picnic tables, with the seasonal creekbed on the left. Follow this trail for about ¼ mile back to the Bear Gulch Nature Center, where your car awaits.