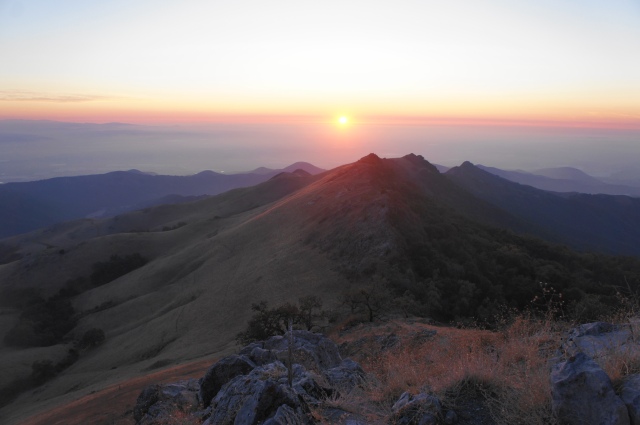 Fremont Peak, one of the highest in the Gabilan Range south of the Bay Area, takes its name from the 19th century explorer, military officer, senator, and presidential candidate John C. Fremont, whose survey expedition passed through the area in 1846. Facing objections from the Mexican authorities who controlled the area at the time, then-Captain Fremont ascended the peak, constructed a makeshift fort, and raised the United States flag on the summit, preparing for potential battle. As Fremont reconsidered his position and a windstorm blew down the flag, Fremont ultimately retreated – but the scrubby peak was later named in his honor.

Today, Fremont Peak State Park preserves 159 acres surrounding the summit and is accessible by way of an 11-mile, intensely winding road that heads south from the old mission town of San Juan Bautista. The short Fremont Peak Trail wraps around the mountain before ascending to the summit, which features stunning panoramic views of the Gabilan Range, Diablo Range, Salinas Valley, and—on clear days—Monterey Bay and the Pacific Ocean. The viewpoint is particularly stunning at sunset, as the photos below demonstrate…

Often overlooked in favor of nearby Pinnacles National Park, California’s Fremont Peak State Park covers a small but scenic landscape with a diversity of landscapes and plant communities. The centerpiece, of course, is the 3,169-foot Fremont Peak. The narrow but paved road accounts for all but 300 feet of the elevation gain, making the climb to the top of Fremont Peak a relatively easy and brief endeavor.

Begin the hike from the parking area at the end of San Juan Canyon Road, past the turnoffs for the Valley View and Oak Point Campgrounds. (Note: On the park map, look for the parking area next to the “Historic Building” and “Fremont Historical Plaque.”) From the parking area, look for the start of the Fremont Peak Trail heading west, a short turnoff from the San Juan Grade Road, which serves as the access drive to a pair of radio towers. (Note: There is, however, a memorial plaque and monument less than a minute’s walk up the drive that are worthy of checking out.)

Leaving the parking area behind, the Fremont Peak Trail wraps around the northern flank of the mountain, with relatively dense woodlands blanketing the hillside below. After a mostly flat and straightforward preamble, the trail becomes rockier and steeper as it climbs to clear a high saddle between Fremont Peak on the left and the lower mounts of aptly-named Rocky Ridge on the right. At ¼ mile, the well-manicured trail descends briefly to the south side of Fremont Peak, affording views down into Gabilan Creek Valley. After traversing a short bridge, a dark—but ultimately brief—rock crevice on the left invites exploration. 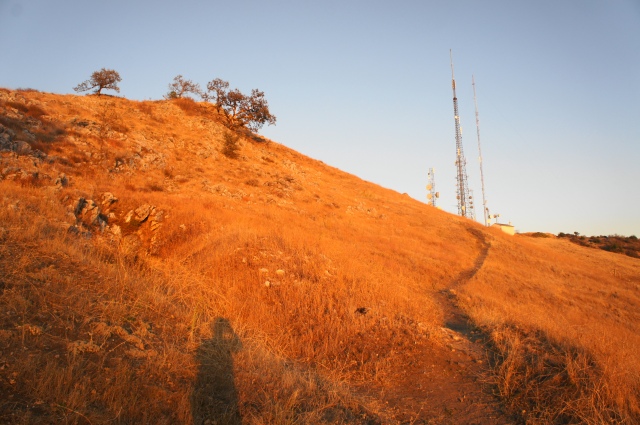 Unlike the northern slope, the south side is largely free of greenery, defined instead by wiry grasses and minor rock outcrops. As the Fremont Peak Trail bears eastward, the summit comes into view on the left, and the path climbs steadily, through a pair of switchbacks, to a trail junction at ½ mile.

Switchback on the Fremont Peak Trail

Sun setting on the Gabilan Range 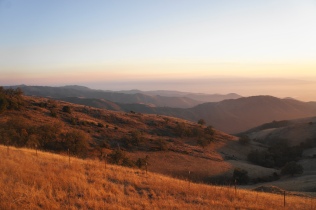 Looking southwest from the slopes of Fremont Peak

Here a service road heads right, downhill, toward the broadcasting towers (outside the park boundary and off-limits to hikers), while the trail continuation bears left. There are multiple options to reach the summit, but the easiest is arguably a relatively well-defined path that ascends a set of stairs to the right before fading away into the rock jumble. Some minor scrambling is required for the final climb to the windy summit.

Final approach to the summit

Atop the summit is a plaque dedicated to John C. Fremont, as well as a flagpole. From the top, one can see north across the park campgrounds to the San Juan Bautista area and Santa Clara Valley. To the east, the view is partly obscured by the radio towers, but the Gabilan Range unfolds with the San Andreas Rift Zone beyond. The Gabilan Range also continues to the south, toward Pinnacles. It is the westward views that are the most rewarding, especially on a clear day, when one can see Monterey Bay and the Monterey Peninsula, with the Santa Lucia Range and Big Sur area beyond. 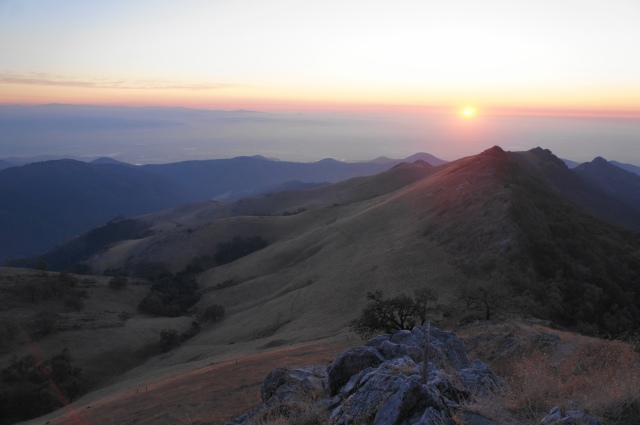 Views westward toward Monterey Bay from the summit of Fremont Peak

View north over the campground area and parking lot

Once ready, return the way you came, carefully descending the craggy jumble of rocks that forms the summit. Follow the Fremont Peak Trail back to the parking area for a 1.2-mile round-trip jaunt that should last around 1-1.5 hours.