Mojave National Preserve is a wild playground of desert peaks, sand dunes, Joshua tree forests, rocky jumbles, and dry lakebeds situated in southern California, near the Nevada and Arizona borders. Considerably less crowded than nearby Joshua Tree National Park, Mojave boasts a seemingly endless set of hiking opportunities, as well as a relatively liberal roadside camping policy. For starters, try the 3.2-mile round-trip Teutonia Peak Trail in the northern reaches of the park, roughly 12 miles south of Interstate 15. Here the views themselves are spectacular, but the real attraction is the peak’s location astride the world’s densest concentration of Joshua trees.

The Teutonia Peak Trail in Mojave National Preserve takes off from the west side of Cima Road, 12 miles south of Interstate 15 (Exit 272). The turnoff is situated just north of the White Cross World War I Memorial and Sunset Rock, an excellent roadside camping area that, due to its relatively high elevation, is chilly in winter. (Note: No one in their right mind should visit Mojave in the heat of the summer, where temperatures regularly top 100-110 degrees.)

Immediately from the trailhead, which has several parking spaces and an introductory sign, one is immersed in a sea of Joshua trees. These desert wonders are actually not even trees at all; rather, they are a particularly large species of yucca that is found largely at elevations between 2,000 and 6,000 feet. 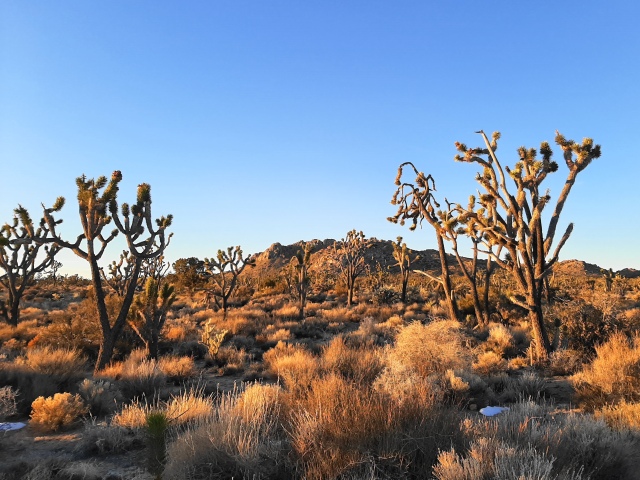 Joshua trees with Teutonia Peak beyond

As you walk along the relatively level trail toward Teutonia Peak, you will notice that the Joshua trees are not alone. The desert landscape also features bunch grass, Mojave yucca, several varieties of sagebrush, a particularly interesting flavor of cactus called the buckhorn cholla, and occasional patches of juniper and pinyon pines, the last of which become increasingly ubiquitous at higher elevations.

The broad Teutonia Peak Trail follows a sandy trace for the first mile, climbing only a single rock step at 4/10 mile before passing between two bulging rock outcrops. Stay straight as the path crosses a dirt road at ½ mile. Inching closer to the base of the mountain, the route remains rather level for the next half-mile before leaving the road trace at the one-mile mark. (Note: It is possible to bear left at the road junction here to reach the old Teutonia Silver Mine, where one can peer down the (fenced-off) mine shafts.)

Beyond the one-mile mark, the trail finally begins to climb in haste, leaving behind the Joshua tree forest. Amid a dense grove of junipers, the trail bounds up a series of switchbacks. At 1.25 miles, the Teutonia Peak Trail crests a high ridgeline, offering views of the rocky wonderland beyond. 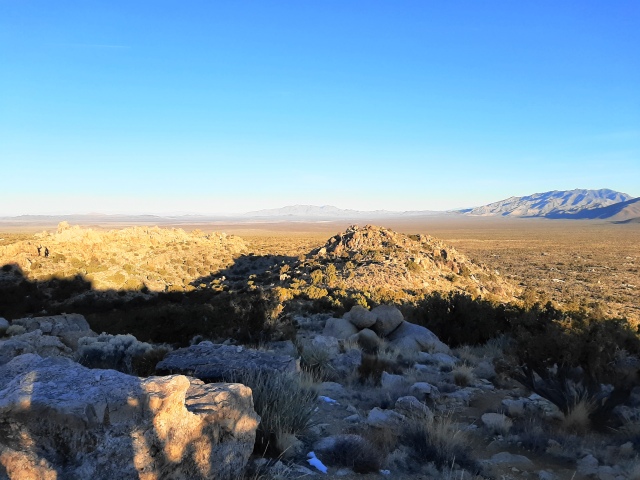 Northside views from the climb up Teutonia Peak

From here the trail bears left, continuing up the slope toward Teutonia Peak. At 1.4 miles, the path crests a higher ridgeline, and hikers get their first look at Cima Dome (5,745’) to the west, a gently-sloping mound that is reportedly the most symmetrical natural dome of its kind.

Approaching the summit of Teutonia Peak

Rounding to the backside of Teutonia Peak, the trail climbs a steeper, rockier incline before ending at a high notch with eastward views back toward the trailhead, with Kessler Peak (6,163’) beyond. The actual summit lies farther to the south: while it is possible to continue beyond the end of the trail, looping around the peak’s various rock jumbles, reaching the actual peak requires at least a Class 3-4 climb. Not recommended without rock climbing experience.

Besides terrific views of Kessler Peak, Teutonia Peak also provides a vantage point for seeing the desolate New York Mountains to the east, as well as the continuation of the Ivanpah Mountains and Clark Mountain Range to the north. To the west, beyond Cima Dome and Shadow Valley, is the relatively low Cinder Cone Lava Beds area, with the Soda Mountains in the distance.

View northeast to the Mescal Range and Ivanpah Mountains

Once ready, return the way you came, enjoying again the dense forest of Joshua trees. Allot about 2-3 hours for this 3.2-mile round-trip hike. Gaining 650 feet in elevation over a short period, this hike is best described as moderately difficult.